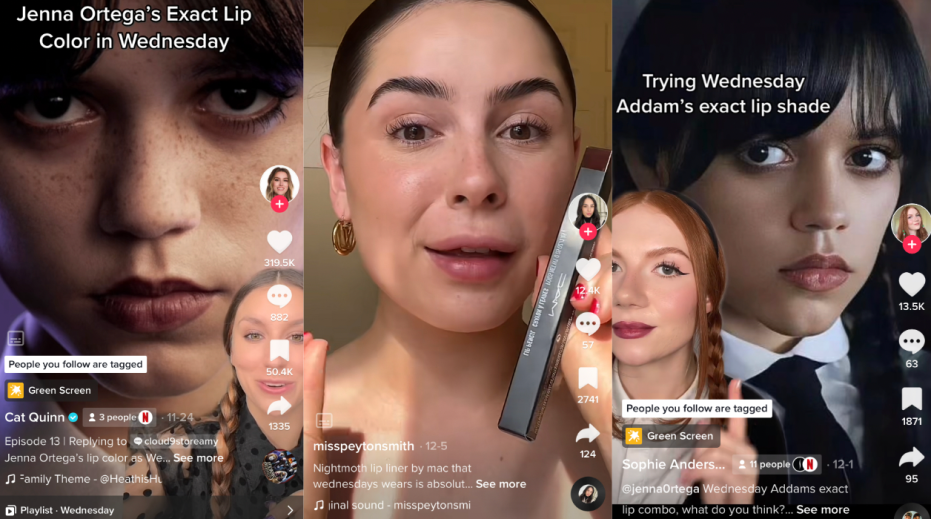 Shortly after its November 23 premiere, Netflix’s “Wednesday” had become a cultural phenomenon.

According to reporting in The Guardian, the show racked up a billion hours in viewing time in three weeks — a milestone among Netflix shows that has only been hit by “Squid Games” and the fourth season of “Stranger Things.” On TikTok, the hashtag #Wednesday, which also includes content about the day of the week, has over 26 billion views. #Wednesdaynetflix has 5.3 billion, and #Wednesdaymakeup has 73.6. million.

One brand reaping the rewards of the show’s popularity is MAC Cosmetics. The company cashed in on the show’s success when Cat Quinn, former beauty editor and Mac’s executive director of trend, created content sharing the two MAC lip products used by the show’s makeup artist, Tara McDonald. Quinn has 212,000 followers on TikTok and over 61,000 on Instagram. In her posts, she does not explain her job title or affiliation with MAC, but she does use the hashtag #macemployee.

In a November 24 TikTok video, which now has 2.9 million views, Quinn said, “I am the first person to tell you [lead actress] Jenna Ortega’s exact lip color in ‘Wednesday.’ Makeup designer Tara McDonald told me exclusively that Wednesday is wearing MAC lip pencil in Nightmoth mixed with Clear Balm.” McDonald also mentioned the product to press, which further contributed to it selling out. The show’s makeup aesthetic has been described as “soft goth” — #softgoth has 57.9 million views on TikTok. As a result of the show, Google searches for “mac nightmoth” increased by 110% in the U.S. between November 5 and December 1. The brand also said people were searching “Nightmoth” at record levels on maccometics.com. It was among the top 3 search terms on the site for two weeks.

The sales bump was also immediate. In the week after the show first aired, MAC saw a 117% increase in sales of its lip pencil in Nightmoth in the U.S. Within the two weeks after the show’s debut, the $21 Nightmoth lip pencil sold out on maccosmetics.com and ulta.com. It has since been restocked in both channels.

MAC, with its long history of collaborations with celebrities, film and television, has long been a “true culture brand,” said Andre Branch, svp and gm at MAC. As such, he said, it excels at “tapping into the worlds of fashion, music and pop culture to create trends and conversations larger than beauty.” According to Branch, the Nightmoth frenzy speaks to the current state of social media as a “great breeding ground for beauty trends today.”

The way MAC responds to such moments in the zeitgeist is a collaborative effort in-house. “When [the trend team] sees something happening in the market, we alert our teams and they get on it,” Branch said. “[That includes] the artists in the stores, our social media [team] and content creators.”

The use of MAC in “Wednesday” was organic, he said — a result of the brand’s strong relationships with professional makeup artists, but not a paid partnership capacity. “We give product to makeup artists so they can use it, but we never know exactly what combination they’re going to use it in,” he said.

MAC saw the soft goth trend brewing even before the premiere of “Wednesday” and is betting that it will continue to grow in the new year, Branch said. Beyond “Wednesday,” he cited cultural moments set to drive the trend, including the makeup looks in the spring 2023 fashion shows of Versace, DSquared, and Burberry. There was also Bella Hadid‘s look at the 2022 Met Gala and the Goth Girl Summer trend adopted by those early to the trend.

11 beauty products that went viral on TikTok in 2022

From scalp care to sunscreen: The beauty trends set to get bigger in 2023, according to social platforms