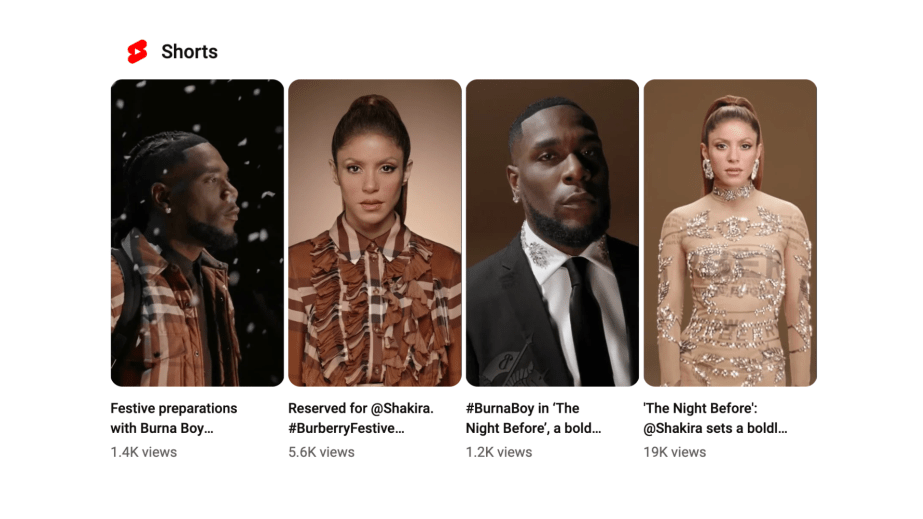 Launched in 2021, YouTube Shorts now has over 1.5 billion global monthly users who drive more than 30 billion views per day. According to fashion companies using Shorts, the short-form videos are effective at getting eyes on their longer-form content and big-investment events. And Shorts are set to become a bigger draw.

According to YouTube, in 2023, it will introduce a revenue-sharing program for Shorts creators: On a monthly basis, it will allocate 45% of the total ad revenue earned on Shorts to Shorts creators, with an individual’s viewership determining their share.

“This is unique to the industry and important for brands because it will help fuel creativity on Shorts, making the environment an exciting place to participate,” said Heather Clark, YouTube’s luxury lead in the U.K. Clark works with fashion companies advertising on Shorts including Burberry, JVN Hair and the British Fashion Council. “YouTube contributed more than £1.4 billion to UK GDP in 2021, and YouTube’s creative ecosystem supported more than 40,000 full-time equivalent jobs in the U.K. [during the year]. So it’s exciting that Shorts will help continue to fuel the creative economy.”

Clark said, at 60 seconds or less, Shorts often serve digestible teasers for longer-form content, and are effective at driving viewers from one to the next. Among other uses, brands are also leveraging Shorts to feature event “highlights, offering audiences unique access,” she said.

Currently, Chanel (2.1 million) and Dior (1.6 million) have the highest number of YouTube subscribers among luxury brands. To promote its May 2022 show in Seoul, Dior released six Shorts videos featuring brand ambassadors including Jisso, Yuna Kim and Bae Suzy. Each shared what they love about the city and noted the date of the show. The videos received 3,000-40,000 views each. Prada has posted Shorts to promote its shows, including teasers prompting people to tune in and post-show videos recapping the highlights.

Burberry has experimented on YouTube with dedicated series for scarf tying and for music from its runway shows. It also livestreams its shows on YouTube, which attracts 3 million viewers, on average. In March 2022, it launched its first Shorts video, featuring show content. It’s used Shorts to showcase all of its shows since, as well as this year’s Burberry Festive holiday campaign. Burberry has 2.6 million TikTok followers and sees an average of 1 million views per video.

Chanel, Dior and Prada all use Reels, Instagram’s home for short-for content. Dior and Prada also post on TikTok — they have 3 million and 750,000 followers, respectively. Campaign videos are among their most common post formats.

For its part, the British Fashion Council has leveraged YouTube Shorts for the past year, with positive results. “The functionality gives us the opportunity to engage our audience through shorter-form content, converting those watchers into subscribers to learn more about our work. [We spotlight] BFC’s impact, educational content for students and entertaining videos from The Fashion Awards,” said Caroline Rush, British Fashion Council CEO. In December, the organization used Shorts and longer YouTube videos to promote its 2022 Fashion Awards. It posted videos of performances by musicians ShyGirl and Jessie Ware, exclusive coverage of the red carpet, and interviews with guests including Stefflon Don, Florence Pugh and Tilda Swinton. The Shorts garnered 2,000 views, on average.

“Shorts are the perfect [platform] for teasing, amplifying and echoing big moments like fashion shows and tentpole campaigns. They drive discovery of your long-form content,” said Clarke. “Fifty-nine percent of Gen Z — already the world’s largest generation — use short-form video apps to discover things that they then watch longer versions of. Therefore, Shorts can help fuel a virtuous cycle of engagement between brands [and consumers].”

Hair stylist and television personality Jonathan Van Ness launched his hair-care label, JVN Hair, in August 2021. In the 18 months JVN Hair has been on YouTube, it’s amassed 230,000 subscribers and 51 million minutes of watch time on the platform.

Teresa Lo, global vp and gm of JVN Hair said, “Within YouTube, JVN builds YouTube Shorts hair-tutorial content and posts about promotions, which brings new audiences into the channel. By supporting YouTube Shorts with long-form content and YouTube’s Community Tab – where brands can engage with users through polls, GIFs and video – JVN is able to drive these new audiences through the purchase funnel.” This layered approach to YouTube has resulted in the platform being JVN Hair’s top organic social driver for traffic and revenue. In the three months since JVN began using YouTube Shorts, the videos have attracted 1 million views.

“From an organic perspective, [brands] have up to 60 seconds to engage audiences within Shorts. Plus, the ‘subscribe’ button is prominently featured, making a channel’s longer-form content more discoverable,” said Clark. “From an advertising perspective, brands adding vertical creative assets [in the form of Shorts] to their YouTube strategy see up to 20% more conversions per dollar. They’re essential to drive shopping behaviors.”