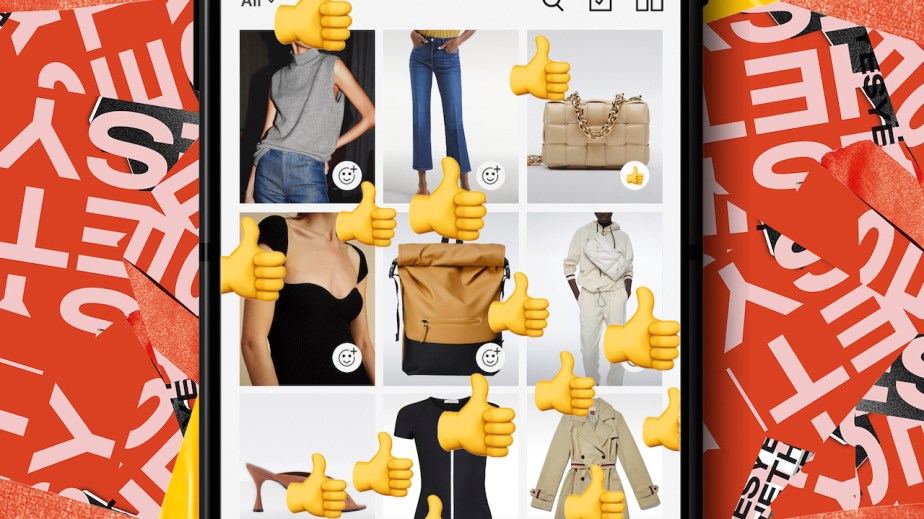 With new social feature, The Yes aims to bring back shopping with friends

Fashion brands and shopping platforms are making it easy to shop with friends, no trip to the mall required.

As social platforms infringe on e-commerce territory, online marketplaces are clapping back with competitive social products meant to draw in friends versus followers. The latest includes 10-month-old The Yes, which on Tuesday added a social component to its AI-driven fashion marketplace. On top of being able to invite friends to view their “Yes lists,” or liked items, they can now collect their feedback on the pieces via five emojis. They include a thumbs-up, a thumbs-down and a face with heart eyes, among others.

“We started to think about, what else can make shopping better online, especially since you can’t go offline?” said Julie Bornstein, founder and CEO of The Yes, of the mid-pandemic launch. The feature was also inspired by the way people view what others are buying on Venmo and by the popularity of emojis on platforms including Instagram, she said.

After a text-based transaction of inviting and accepting between friends, they’ll be notified of each others’ in-app feedback through notifications. They’ll also be notified when friends like products, prompting the opportunity to provide their input.

To get the feature off the ground, The Yes will promote it organically through Instagram posts, emails and app notifications to its users.

In the six months following The Yes’ launch, users had entered 7 million “Yes” and “No” votes on pieces, which train the platform’s algorithm to serve up styles they’ll love. The Yes now sells more than 200 fashion brands, ranging from designer to contemporary to mass, including Zara. It houses the second-largest fashion assortment online after Farfetch, according to Bornstein.

“Every month, we build a set of new features,” she said. The new social component is one of many social sharing features the company plans to release this year. It has three “big new ideas” set to launch in the next 3-4 months, one of which relates to social shopping.

Bornstein declined to elaborate on future plans, but said, “The idea of seeing products on people who are your size, and how they’re outfitting them, is incredibly helpful when deciding if you’re going to buy something or wear something. We believe that’s a problem worth solving, and we’re working on it.”

Currently, the data that The Yes shares with partner brands includes “Yes” and “No” votes on products, among other points. Bornstein said that if the feedback between friends proves useful to brands — for instance, if the percentage of “frowny faces” and “positive faces” corresponds with that of “Yes” and “No” votes — that data may be shared.

The Yes’ launch is on-trend: In December, e-tailer Verishop launched Shop Party on its app, allowing groups of up to five people to chat and view each other’s carts while shopping. Likewise, five-month-old tween brand Woodley + Lowe is gearing up to release a “reimagined ’90s shopping experience” on its e-commerce site through a functionality that lets shoppers consult with each other on potential buys.

“With Gen Z, peer-to-peer [advice] is so much more important,” compared to recommendations from experts or celebrities, said Rachel Thebault, co-founder of Woodley + Lowe.

In step, tech companies are increasingly sprouting up to come to the aid of both retailers wanting to connect friends and friends wanting a second opinion as they shop. New York Fashion Tech Lab alum BuyWith, launched in 2017, is behind e-commerce software that enables live broadcasting and interactivity of online shopping sessions. In March 2020, co-founder and CEO Adi Ronan said the company was seeing a boost in business from brands and retailers. Timberland and MAC are among its clients.

There’s also NewNew, which launched in September 2020, that offers polling and invite-only chat groups around specific topics. A spokesperson said users have been creating groups with friends and custom poll groups centered on fashion and beauty products they discover, love and hate. To date, the company’s been backed by Andreessen Horowitz, Founders Fund and Will Smith, among others.

That’s not to mention the many companies and tools that have launched to connect influencers with followers as they shop, and also browsers to video reviews by everyday shoppers. The former includes Amazon’s launch of Amazon Live in July, and Facebook and Instagram’s release of livestream shopping in August. The latter includes the Google Shopping Feature formerly called Shoploop. Back in 2014, Sephora launched Beauty Board, to let its audience upload and shop each other’s beauty looks. The feature evolved to be called Gallery in 2017. Sephora declined to comment on current engagement.

According to Bornstein, Instagram’s experience isn’t catered to the fashion shopper. “It’s great for impulse buying. Plus, it works for a certain need states and certain price points, and it’s great for inspiration. But it’s not the solution for when you want to invest in clothing, when you want to shop and buy,” she said.

Overall, the concept of virtual shopping with friends, though thriving in Asia, is still in its infancy in the U.S., making related investments risky. Case in point: Social shopping app Dote abruptly shut down in January 2020. In April 2019, the company boasted 3.2 million, mostly Gen-Z users and $23 million in venture backing. It had just launched Shopping Party, a Twitch-style offering allowing shoppers to host-15 minute shopping events for friends and followers to watch them shop and weigh in on purchases.