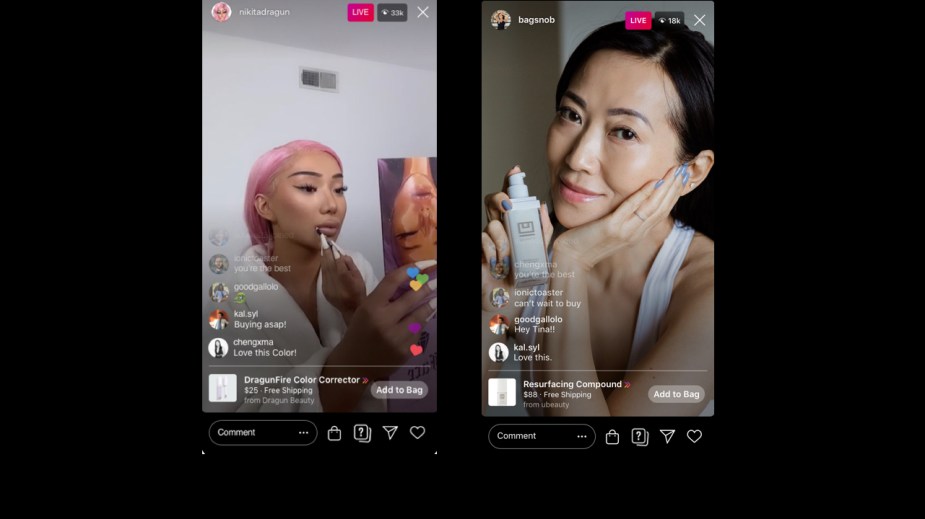 After a surge in Instagram livestreams since the start of Covid-19, shoppable capabilities have finally joined the live experience on the platform.

Connected to Instagram Checkout, the Instagram Live Shopping feature quietly rolled out in beta in June to a select group of users chosen by the platform and was announced by Facebook on August 25 along with additional developments of its commerce features. Influencer-founded beauty labels Dragun Beauty and U Beauty were among the first to host shopping-enabled livestreams earlier in the summer. Beauty brands’ foray into livestream commerce comes as a growing number have been leaning into Instagram Checkout, which Facebook has announced will come out of beta, along with Live Shopping, within weeks.

“There’s an immediacy for people who want it right away,” said U Beauty founder Tina Craig, who promoted the brand’s Resurfacing Compound on her @bagsnob account in her first shoppable livestream on June 25. In order to attract users to watch, she said in an Instagram post that she would be revealing her second product ahead of its launch, the Super Smart Hydrator that ultimately launched on September 1. She also promoted a 20% discount off the Resurfacing Compound, which sells in three sizes from $88 to $228. In an Instagram message after the livestream, she posted that the discount would be extended by 24 hours on Instagram Checkout, saying many viewers were unable to check out during the live.

Beauty influencer Nikita Dragun, meanwhile, attracted nearly 43,000 of her 8.3 million followers to a July 9 Live Shopping video for her Dragun Beauty brand’s DragunFire Color Corrector, which featured a beauty tutorial. The livestream drove 33,000 product page impressions, and 5,000 products were added to viewers’ shopping bags, according to an Instagram spokesperson.

“We also lean heavily into other IG shopping features, such as product [launch] reminders,” said Dragun, who said she “literally broke the record for number of launch reminders set” and sold out of the product “within a couple of hours.”

Craig said that for U Beauty, viewer numbers “were higher than usual.” Although she didn’t provide exact sales numbers, she stated, “We did really well.” She compared the event to her prior experience selling a handbag line on HSN. For Instagram, she noted the importance of doing a combination of sales-driven and content-driven livestreams.

“It’s a really powerful tool,” she said. “There’s a fine balance of not feeling like you’re constantly trying to sell something every live.”

Livestream shopping is already wildly popular in countries in Asia, especially in China, where it reached $61 billion in sales in 2019. Brands have begun to experiment with it in North America during the pandemic, with L’Oréal Group and Estée Lauder Companies brands adding shoppable livestreams to their websites. Clinque has been especially active, bringing in celebrities such as Emilia Clarke to participate.

But livestream shopping is still in its infancy in the U.S., and Instagram’s feature remains basic while in beta mode, allowing only one item to be featured at a time. Craig hopes for more features to be added in the future to make the experience more seamless, including allowing more than one product at a time to be featured and giving multiple users the ability to log in on the backend (so a second user can do the work of adding the items while the speaker is talking). She also noted that Instagram should make it easier to discover lives on centralized fashion and beauty channels featuring scheduled programming.

For U Beauty, the next shoppable live is scheduled for September 9; Nikita Dragun did a second Dragun Beauty live shopping video on July 31 for a liquid lip color launch.

“Live shopping will definitely be a part of our ongoing organic strategy,” said Dragun. “I love using it in both planned and more surprise ways.”

“We’ll be doing them regularly,” said Craig of Instagram Live Shopping events, emphasizing the importance of adding unique content to attract users. “Right now, there’s been a sort of a live fatigue. I really believe in making lives and events something really special.”