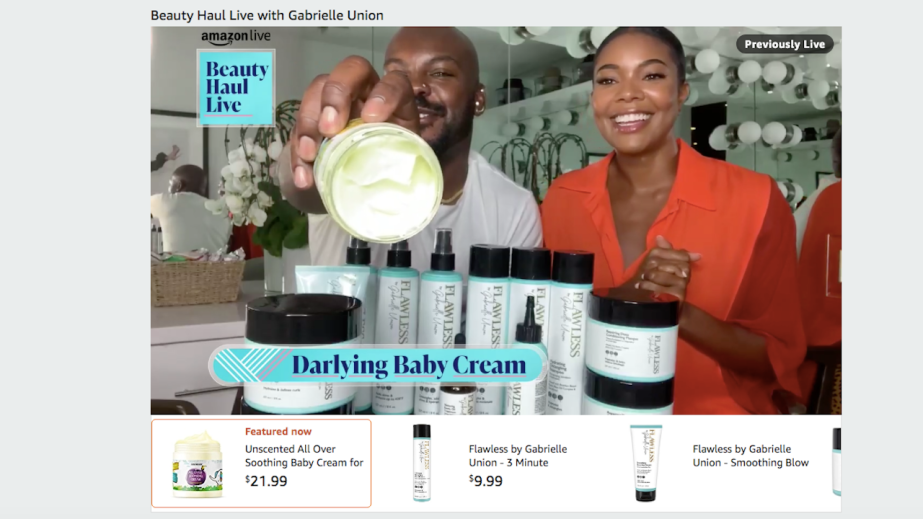 From Gabrielle Union to Jessica Alba, beauty brand founders are getting on board with Amazon’s livestream shopping function.

In the past few months, a growing number of beauty brands have created Amazon Live shoppable videos as livestreaming adoption has surged during the pandemic. Attracting viewers through celebrity and influencer appearances as well as special discounts, beauty brands are using Amazon as they experiment with several new livestream shopping formats for a North American audience.

On September 25, beauty brands including Flawless by Gabrielle Union, Honest Beauty, Cetaphil, Neutrogena, Elemis and Follain participated in Amazon’s Beauty Haul Live event. The 11-hour event, which included hundreds of livestreams, drew viewers with celebrities and influencers, as well as more than 70 special offers. The livestreams were promoted on participating brands’ and influencers’ social media accounts as well as through Amazon press outreach. Amazon’s spokesperson could not provide viewership.

As part of the event, Gabrielle Union appeared on a livestream with her hairstylist Larry Sims to promote her newly launched Flawless hair-care brand, as well as other Black-owned beauty and personal care brands including Mented Cosmetics, Honey Pot and Darlyng & Co. Products in the Amazon livestreams appear underneath the video and are highlighted when they are mentioned. Users can then click through to their listings to shop directly on Amazon. Flawless’ livestream earned nearly 100,000 views, according to the brand, after being promoted on the Flawless Instagram account.

“This pandemic is really driving more people to virtual,” said Karonda Cook, strategic brand consultant for Flawless by Gabrielle Union. “The future potential is endless [for livestreaming]. It really allows brands to connect with their consumers.”

Also hosting an Amazon livestream was Jessica Alba, who was the host of one promoting her brand Honest Beauty, along with her mom and actress Lizzy Mathis. Influencers also hosted multi-brand livestreams promoting product listings from a range of different brands’ official Amazon shops. Makeup artist Gabriel Zamora did a makeup look featuring products by brands including Anastasia Beverly Hills, Revlon and LORAC, while former Bachelor contestant Ashley Iaconetti promoted brands including Dermalogica and L’Oréal Paris.

NYX Professional Makeup, meanwhile, hosted a livestream with beauty influencer Karen Gonzalez showing a fall makeup tutorial. According to Yasmin Dastmalchi, the brand’s svp of U.S. marketing, Amazon Live gives the brand “the opportunity to create engaging content that support our efforts in recruiting, learning and connecting to multiple audiences from all sorts of backgrounds.”

Amazon Live has an official programming schedule with talks by celebrities and public figures like Chelsea Clinton and Mindy Kaling. It has been ramping up beauty programming, also showcasing skin-care brand Bolden on September 30 as part of its Women of Color series launched on September 18. In addition to its official Amazon events, the e-tailer has been developing tools to allow anyone to host their own livestream. It launched the Amazon Live Creator app in February 2019 for brands, and opened it up to members of its Amazon Influencer Program in July 2020.

Some beauty influencers in the program are now streaming beauty content regularly on Amazon via multi-brand tutorials in the style of YouTube beauty vloggers. They earn affiliate revenue for purchases made. Carla Stevenné of Beauty by Carla livestreams between two and three times a week, while Helene Desmettre of The French Glow does so between four and five times a week.

Amazon has been offering resources, including podcasts and webinars, to encourage influencers and brands to use the feature. It recently hosted a webinar encouraging brands to use livestreaming for Amazon’s upcoming Prime Day event from October 13-14.

Beauty brands are experimenting with a range of different livestream shopping platforms as the format is becoming more familiar to a U.S. audience. NYX, which hosted a shoppable Amazon livestream in May this year, has also been hosting shoppable livestreams on its website, as have other brands in the L’Oréal Group portfolio. Estée Lauder Companies brands including Clinique, Bobbi Brown and La Mer have been doing the same. Flawless by Gabrielle Union is also planning to utilize Instagram’s newly introduced shoppable livestream feature.