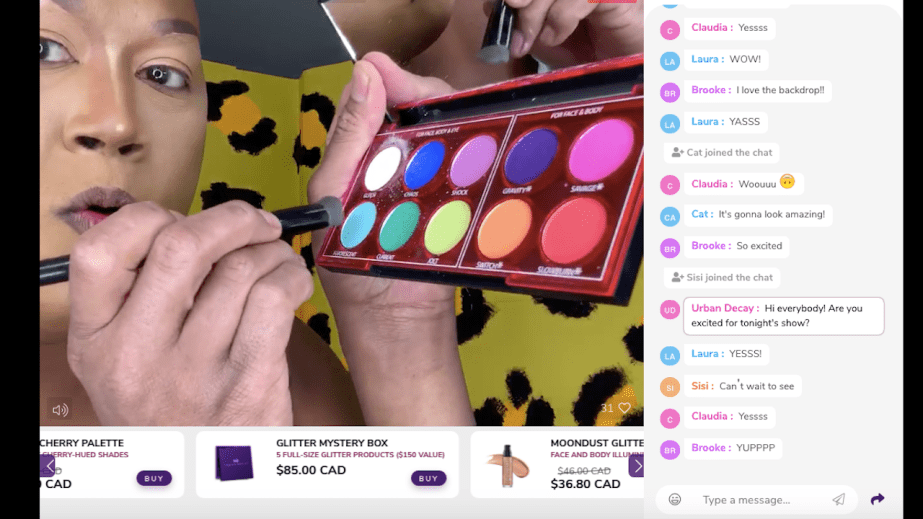 The beauty industry is moving fast to incorporate shoppable livestreaming into U.S. e-commerce with the onset of Covid-19. But as Instagram Live currently does not have shopping capabilities, brands have been turning to other platforms to integrate shopping links into their livestreams to connect content and commerce.

Like Estée Lauder Companies, L’Oréal Group brands including Urban Decay, Lancôme, NYX Cosmetics and It Cosmetics have been offering shoppable livestreams on their brand sites in North America during the pandemic. Working with shopping platform Livescale, Urban Decay and Lancôme held livestreams before the pandemic on their Canadian sites. But many, including Urban Decay’s U.S. site, NYX Cosmetics, Kiehl’s and It Cosmetics first hosted these events after the quarantine began in March. Examples of livestreams include Urban Decay’s Pride livestream makeup tutorial with Canadian drag queen Sofonda Cox on June 30 and Kiehl’s upcoming July 8 skin-care tutorial, both of which are listed as offering discounts and giveaways.

NYX Cosmetics has also hosted shoppable livestreams for Pride. On April 24, the brand’s global head of education, Mark Anastasios, did a live tutorial, offering free shipping for purchases through the website for the rest of the day to anyone who tuned in the whole time. That was followed by a May 20 Pride makeup tutorial livestream with Matt Bernstein that featured products throughout the livestream.

“Like everyone else, we definitely had to take a step back and evaluate how to navigate everything when we first went into quarantine,” said Yasmin Dastmalchi, senior vice president of U.S. marketing at NYX Professional Makeup. “Within weeks, our in-person events were shuttered, and plans changed in an instant. We had to adapt our marketing approach immediately.” She noted that in addition to live shopping on its site, the brand will be testing live shopping on Instagram next month.

Livescale is one of several livestream companies that have seen an increase in new clients: It has seen a five-fold uptick in business inquiries since March. Founded in 2016, Livescale has been increasing its e-commerce partnerships. In addition to working with Salesforce Commerce Cloud, it  launched a partnership with Shopify on June 25 for North America, becoming available on the Shopify App Store for merchants.

Livestreaming use by brands has skyrocketed during the pandemic. For shoppable livestreams, Estée Lauder Companies works with Swedish platform Bambuser, while social networks have also seen a surge. In addition to Instagram Live, brands are starting to become active on TikTok’s livestreaming feature, which allows users to buy virtual “gifts,” hinting at a future with e-commerce functionality that is already offered on its Chinese counterpart Douyin. Facebook Live is also being adopted by brands, as well as TV shopping networks QVC and HSN.

According to Livescale founder Virgile Ollivier, the conversion rate for its clients’ shopping events averages of 9.5%.

“We discovered that bringing engagement and livestreaming [together], offering the capacity to interact with the host and providing a seamless checkout experience were the key elements of success in livestreaming commerce in Asia,” said Ollivier.

Skin-care brand Shani Darden held its first livestream with Livescale on its site in late May, featuring an esthetician giving a skin-care tutorial.

“This is something that we really started to look more closely at during the pandemic,” said Crisanta German, senior director of marketing at skincare brand Shani Darden. She noted that the brand sees the platform as especially useful for tutorials. “You remove all that friction with having to go search for the product online by having the product within the module itself,” she said.

In addition to the shopping feature, site livestreams also have technical advantages over Instagram Live at the moment.

“Instagram Live has been having a lot of platform issues because there are so many people that are doing lives at the same time; we’ve been trying to diversify the platforms that we’re using,” said German, who noted that Shani Darden’s site livestreams have had clearer images and no delays.

Another selling point for site-integrated livestreaming is the fact that brands do not have to rely on an external social platform for access to data on engagement and conversions.

“Data and ownership of the audience is key today for e-commerce brands, because they need to bring some information and knowledge about their customers to serve them better,” said Ollivier.

But not all beauty brands are completely sold on livestreamed shopping for North America, as a Kiehl’s spokesperson said it is not a high priority.

“For industries like makeup and color, livestreaming is just going to grow and grow,” said German. “Watching someone do a makeup tutorial live and being able to interact with them and ask questions is something that you can’t do on a static YouTube video.”

Ollivier predicts that “live shopping is going to grow faster than expected because of Covid[-19].” “We’re quite sure that the level of views of live shopping in the coming months and years will be similar to Asia,” he said.

“The in-virtual life approach is one we will keep long-term,” said Dastmalchi.