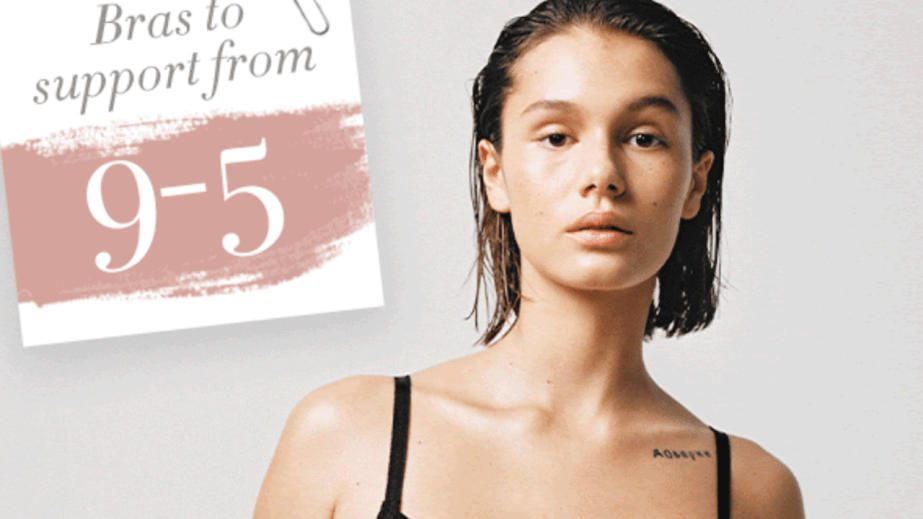 Fashion Briefing: Bra brands want you to go back to work

Bra brands want you to go back to work

Heading back to the office?

That was the subject line of a customer email sent by lingerie retailer Journelle on Friday. Those who opened it saw the header “Bras to support from 9-5,” followed by images of five bra styles, each containing an underwire.

“First it was dating, then travel, then bridal. And now we’re ready to address the return of normalcy at work,” said Guido Campello, CEO of Journelle and lingerie brand Cosabella. “People are relaunching a routine that involves getting up earlier and taking the subway. Or they’re doing interviews. The Great Resignation is real.”

As such, he said, there’s set to be a quick ”pullback into sophistication,” despite workers’ early efforts to keep it comfortable and casual on their return to the office. “As people get back to seeing the same people every day, they’re not going to want to keep wearing the same black shirt.” Journelle is marketing and merchandising accordingly.

Workwear and comfort wear have long resided on opposite ends of the clothing spectrum. That was evident in working women’s notorious, pre-pandemic habits of keeping their high heel collection under their desk and taking off their bra within seconds of getting home. Campello said bralettes first started to become popular four years ago. But, until 2020, women typically referred to them as their “weekend bra” or “Sunday bra.”

Working from home served as permission to remain comfortable throughout the workday. And as women traded “hard pants” for leggings and sweats, they also abandoned bra styles with wires and padding in favor of bralettes, sports bras or nothing at all.

For many workers, tides are now turning, to some extent. Both Campello and Heidi Zak, co-founder and CEO of ThirdLove, said bralettes are set to remain popular. But for many women, putting on a more supportive bra, much like wearing makeup, offers a level of polish or confidence they still want for their at-work self. Other brands are betting on that, too.

Slowly but surely, people are going back to the office. In February, Pew Research Center reported that, of workers who said their job can be done at home, 59% were doing so all or most of the time, as of January. That’s a decline from October 2020, when 71% claimed to do the same.

As such, for the next 4-5 months, Journelle plans to focus its marketing on “getting back to basics,” spotlighting work-perfect bra styles that are smooth, wired, flattering and “sexy enough,” thanks to offering lift. That’s what women will be looking for, as they get back to wearing silk blouses, button-downs and trending bodysuits, Campello said.

In preparation, Journelle’s stocked record quantities of these styles. In the last three months, it’s introduced four new brands focused on “everyday office basics” that have since been fast sellers, Campello said. In the same timeframe, it’s also added seven “skin” colors to its Victoire style, an underwire bra that’s been 2022’s best seller to date.

Zak said that, while wireless bras were popular during lockdown, the company is “seeing the balance tip back toward wired bras, as women are once again seeking more support.” Customers are now stocking up on classic wired bra styles, she said. In March, the company saw a “notable increase” in the number of customers buying two or more of these bras at a time.

For its part, Cosabella’s current top seller is its Never Say Never balconette bra. Incorporating both an underwire and stretch lace fabric, it strikes a good balance in offering both support and comfort. Sales of the style have tripled in the last two months.

“[Sales of] wired styles are really coming up, but comfort is still the keyword,” Campello said. “We’re trying to make underwire, structured and supportive bras comfortable, across the board.”

Other bra brands have very similar goals, based on the homepages of their e-commerce sites. Many are hyping bras that are both supportive and comfortable – some wireless, some not. Cuup leads with “We support you,” linking to all of its bras. Its Scoop style claims to provide “enough support to wear all week, but soft enough to forget that you’re wearing anything.” True & Co. is prioritizing its Softform Bra that “supports without restricting movement.” And Lively is leveraging current work life lingo, promising “the hybrid bra you’ve been dreaming of” before linking to its full array of bra styles.

Overall, underwire bra sales have grown since 2020, and brands are ramping up their advertising spending for the category, said Kristen Classi-Zummo, fashion apparel analyst at NPD Group. But, she said, brands hoping to increase sales of underwire bras to pre-pandemic levels will face an uphill climb.

Wardrobes, as a whole, have become more casual. What’s more, after trialing wireless bras for the first time during quarantine, many women have concluded that some are, in fact, supportive and safe for work. Brands are increasingly rolling out styles meeting these criteria. And industry-wide data shows that women are now investing in wireless bras over other bra styles due to their versatility, Classi-Zummo said.

In 2021, wire-free styles made up over half of the dollars spent on non-sport bras. And sports bras continued to outpace non-sports bra growth.

Of course, brands making restricting-by-design shapewear are in the same boat as those behind structured bras. For shapewear brand Shapermint, which drove 20% of the shapewear market in 2020, its sales are on the rise and its leadership team expects that to continue. As such, they’re increasing their ad spending. A significant portion of those ads center on “the promise of truly comfortable shapewear,” said Massimiliano Tirocchi, CMO of Shapermint parent company Trafilea.

In 2021, shapewear sales were up 41% year-over-year, but they were down 9%, compared to 2019, Classi-Zummo said. Exceptions were styles women potentially deemed more comfortable alternatives to traditional bras: Shaping tanks and camis were up 19%, versus 2019.

At Victoria’s Secret, bralettes start at $25, wireless T-shirt bras start at $35, sports bras start at $40, and push-up bras with underwires start at $45. But considering their comparatively more complicated design, traditional wired styles don’t necessarily have higher margins. Brands’ current, dedicated marketing of the category is instead about winning women’s business when they move on from their pandemic bra wardrobe.

ThirdLove launched loungewear, sleepwear and activewear during the pandemic, though Zak said that “bras have always been, and will continue to be, the core of [the] business”

Similarly, Journelle and Cosabella sell underwear and loungewear, among other products. However, bras have continued to drive a large portion of their sales, at 50% and 40%, respectively.

Both Cosabella and Journelle are in growth mode: Cosabella sees a 35% increase in annual sales, like clockwork, Campello said. Meanwhile, Journelle, which was investing in stores ahead of 2020, bounced back to 2019 numbers in 2021. Campello owed that to people getting organized and refreshing their underwear drawer. Now, 2022 has the potential to be its best-ever sales year, he said.

Many brands specializing in undergarments are leaning into new demand. According to a spokesperson for retail platform Leap, the company signed Lively, Hanky Panky and Negative Underwear as new clients within the month. In mid-March, it opened a ThirdLove store in Venice, and it’s getting ready to open another store for the brand, in San Francisco.

Moving forward, Campello said, lingerie brands hoping to compete for sales in the wired bra category, specifically, will need a solid plan. The bras have around 30 components, with wires and padding, among other details, often being produced in Asia. To avoid the potential impact of an escalating tariff war, he’s currently shifting production of the styles to Mediterranean countries within Europe. The move will be complete by June.

“The workspace mentality is going to be part of people’s dress culture,” Campello said, adding, “And women are the bosses, right?”

Shapewear is having an identity crisis

When Spanx launched the shapewear category in 2000, it was a pretty straightforward proposition: undergarments providing a smooth, sucked-in effect and, therefore, more confidence while wearing body-con styles. But today, “shapewear” brands include styles that could – and arguably should – be described as activewear, dayware and even athleisure. For example, styles by Lizzo’s’ new “shapewear” brand, Yitty, announced on Wednesday, include sweatshirts and leggings in neon-bright shades. Meanwhile, Kim Kardashian’s Skims now sells swimwear styles and backs a product category dubbed “clothing and lounge.”

As Guido Campello, CEO of lingerie companies Cosabella and Journelle, put it, “Shapewear is a much bigger word than it is a business right now. It’s very catchy. And people claim this monster brand that’s developed in Skims is a shapewear brand, but it’s not a shapewear brand. It’s [a brand that uses] soft fabrics. There’s nothing shapewear about it. [Shapewear] has become one of those catchall words and allows people to feel like there’s an extra function with their underwear. And ultimately, the real shapewear isn’t something that people are gravitating to right now. It’s not dead, but it’s just not what it was.”

Spanx sold a majority stake in the company to investment firm Blackstone in October, at a $1.2 billion valuation.

Kristen Classi-Zummo, fashion apparel analyst at NPD Group, confirmed that shapewear sales are down, compared to 2019. But, she said, that excludes shaping tanks and camis “that are more comfortable and easy to wear.”

“You can wear these styles to shape and also to be seen,” she said. “Women are wearing them as tops with their favorite straight-leg jeans and even sweats.”

Massimiliano Tirocchi, CMO of Trafile, parent company of shapewear company Shapermint, also pointed to the new wearability of shapewear styles. “Consumers are purchasing more of the styles that give you the right control, with a medium compression, and are comfortable enough to be worn during the entire day.”

If non-restrictive shapewear is not an oxymoron, you could’ve fooled me.

Nike’s interactive manufacturing map is a poor example of corporate transparency. The company’s interactive map on its corporate site is meant to provide transparency into its manufacturing processes. For example, it shows every factory where Nike products are made, along with data related to those factories. But it’s full of errors, including some data that would be illegal if true. For example, it states that the average age of employees at its Sri Lankan factories is 13 years old.

“We’re at the beginning of the next renaissance of plus-size fashion,” according to Nadia Boujarwah, founder and CEO of Dia & Co, a fashion e-tailer catering to women sizes 10-32. Old Navy recently laid the foundation for such a renaissance by launching inclusive sizing, pricing and merchandising across its women’s product portfolio. Of course, not every brand can afford to make such an investment in the category — and doing so isn’t needed to forward progress, Boujarwah stressed.

Brands took different approaches to tackling the NFT opportunity during Decentraland’s Metaverse Fashion Week last week. For example, Tommy Hilfiger set up shop to sell phygital items, in the form of sets including NFTs for avatars and their physical counterparts.