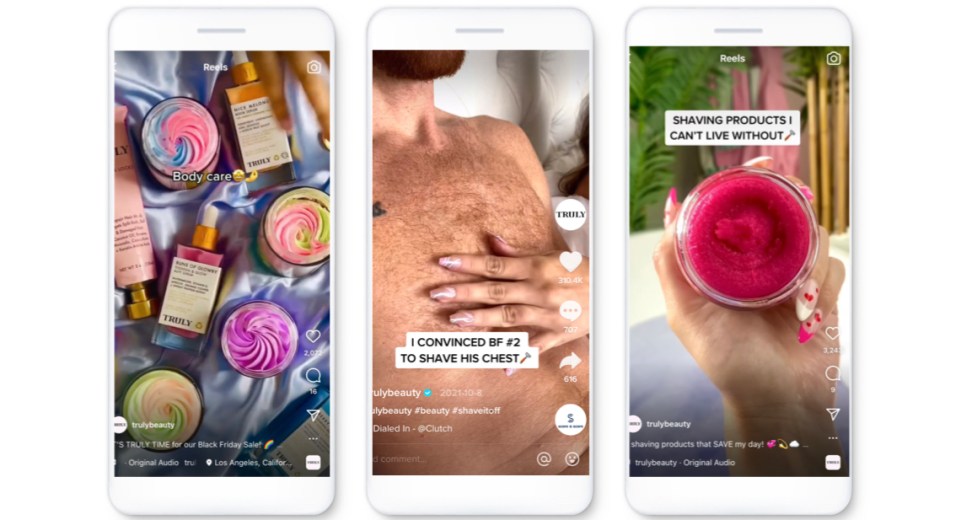 Beauty & Wellness Briefing: TikTok and Reels have brands finding a balance between ‘unhinged’ and polished content

For this week’s Beauty and Wellness Briefing, we’re looking at how brand strategies differ on TikTok and Instagram’s Reels. Also:

As Reels takes over Instagram users’ feeds in a bid to compete with TikTok, brands are navigating how to adjust their pivot to video across the two different platforms.

After Adam Mosseri, head of Instagram, announced in December that Reels would be Instagram’s biggest focus for 2022, brands had no choice but to adapt their content. Those with a solid TikTok plan in place may have a leg up on creating short videos, which they often repurpose for Reels. But brands are realizing that both TikTok and Reels have unique characteristics when it comes to format and audience.

“Instagram overall is just trying to be this Swiss Army knife of a social media channel, and Reels is right now the main fork in that. They’re just trying to really push for it,” said Tyler Moore, social media manager at Truly Beauty. The body care brand was one of the first beauty brands to hit over 1 million followers on TikTok but still considers its social strategy to be Instagram-first. Instagram is still Truly Beauty’s “biggest community” and where it posts the most, said Moore. He added that it’s also the brand’s biggest social platform for driving revenue.

Last year, Truly shifted its Instagram content to focus on Reels. While it originally had a content plan of posting two photos a day and one video, it changed course to two videos and one photo.

“It’s a great moment in time to be on Reels, because Instagram is really pushing it. They want to make it happen,” said Evan Horowitz, CEO of advertising firm Movers + Shakers, which is behind viral TikTok campaigns for brands such as E.l.f. and NYX Professional Makeup. “It’s definitely an easy win for brands right now, but that’s not going to last.”

Movers + Shakers currently does not produce any Reels-first short video campaigns, instead opting to create TikTok content and repurpose it for Reels.

“We definitely see Reels as a secondary platform,” said Horowitz. The agency views Reels as a way to get “extra mileage out of what you’re doing on TikTok.”

“[Reels] hasn’t come into its own enough yet for us and our clients to really prioritize a lot of Reels-first work,” he said.

Brands have noticed key differences between the platforms, as content on Reels often still maintains the polished “Instagram aesthetic” many TikTokers have rejected.

“On TikTok, we can be fully unhinged,” said Moore, who noted that videos with outlandish skits, such as a video of a girl shaving her boyfriend’s chest hair, tend to do well on the platform. The brand’s videos created for the TikTok audience focus on funny sketches and “chaotic” scenes, he said. “Sometimes, they’ll perform so well on TikTok that we take them over to Instagram, but the Instagram audience isn’t so much of a fan of the content.”

This is due in part to the age differences of the audiences. Millennials using Reels “are a little bit more serious about social media content and messages behind it,” said Moore. “Gen Z is a little more playful, and they get the jokes.” According to data from Forrester, Gen-Z teens use TikTok more frequently weekly than they use Instagram. The brand has started to create different types of content with Reels in mind. According to Moore, the Reels videos are “a little more polished,” “less skit-like and “very visually appealing.”

“We want the aesthetic to be very top-notch,” he said.

Reels “still feels a bit incongruent, because some of it is really low-fi TikToks; they’re very trend-driven and sound-driven,” said Horowitz. Meanwhile, Reels-specific videos are often made up of “aesthetic-driven content,” such as visually appealing slideshows and lifestyle shots.

According to Moore, Truly’s brand posts tend to get more engagement on TikTok. An experiment by Hootsuite that placed the same videos on TikTok and Reels also found that TikTok videos have higher organic views.

But when it comes to advertising, brands may have an advantage on Instagram, which rolled out Reels ads worldwide in June 2021. An experiment by advertising automation firm Creatopy found that the same 15-second ad posted to both Reels and TikTok earned almost triple the impressions on Instagram, with a reach of 389,000 on Reels and 199,000 on TikTok. The Reels ad ended up being significantly cheaper, with a CPM of $1.67, compared to $4.38 for TikTok. According to Csilla Borsos, a PPC specialist at Creatopy, the firm is running more experiments to see if different ad formats perform better on each platform.

“If you decide to run ads on both platforms, you should definitely tailor your content type accordingly,” said Borsos. “On TikTok, it has to be a funnier approach, with the human in the center, and not necessarily focusing on the quality of the video, but on what it is about.”

Although Reels has ad capabilities, it still does not have the sponsored viral challenges that gain massive visibility for brands on TikTok. That’s because TikTok is more “participatory,” while Reels is “still more for watching,” said Horowitz.

Brands are still waiting to see which direction each short video platform goes when deciding where to spend their marketing resources. But they see continued relevance for both platforms in the future.

“Instagram is going to make Reels work, because it’s important to the survival of the business, and they have the resources,” said Horowitz.

Turns out it’s a good week for any brands associated with the name Harry: Shaving startup Harry’s has become one of the most popular brands for body wash at Target.

Tretinoin gets trendy: The prescription skin-care product is now a skin-care status symbol, thanks to skinfluencers and telemedicine.

Milk Makeup CEO Tim Coolican is on the most recent Glossy Beauty Podcast.

Estée Lauder Companies reaches settlement with MAC Cosmetics makeup artists who lost their jobs based on a computer algorithm. A BBC documentary featured the experience of three former makeup artists for MAC Cosmetics who were subjected to a video interview using AI technology from Hirevue, which analyzed their facial expressions and answers. According to a Personnel  Today article on the incident, they were “made redundant” (in American terms, laid off) and initially “required to reapply for their positions,” despite the fact that they had not received communication about any performance issues. After losing their jobs due in part to the computer’s automated judgment, the makeup artists took legal action against the company and received an out-of-court settlement. According to the BBC, “race, gender and emotion can be misinterpreted by some facial analysis technology,” and “voice transcription services still struggle with accuracy,” especially when it comes to accents. ELC claims that “using the Hirevue process in tandem with human decision-making produces fairer outcomes and we stand by it.”

The Act has had beauty industry support. In partnership with the National Urban League, Color Of Change and Western Center on Law & Poverty, Dove, owned by Unilever, co-founded the CROWN Coalition to advance the Act in 2019. Dove’s advocacy for the act was led by Esi Eggleston Bracey, the evp and COO of beauty and personal care at Unilever North America.

When a receptionist — called “first-impressions coordinators” in Glossier parlance — came to work in a flannel shirt and tennis shoes with her hair in braids, her boss took her to the side and reprimanded her. “She told me, ‘I need you to dress more in the Glossier way,'” the receptionist, who is Black and who later left the company, recalled. “I was just like, ‘What are you talking about?’ And she was like: ‘I think you know what I mean. Just look around.'”

Glossier responded that “this behavior is not reflective of our company values.”

The BI article is the latest in a series of articles examining Glossier’s business decisions and internal culture, following a January scoop by fellow Digiday Media publication Modern Retail that the cult beauty brand laid off a third of its staff. Other findings: The Play sub-brand was shut down after a series of pivots in its direction, and Glossier scrapped its Facebook-esque social commerce platform to which it had dedicated significant resources. Looks like laying off over 80 employees has made a lot of people eager to talk.