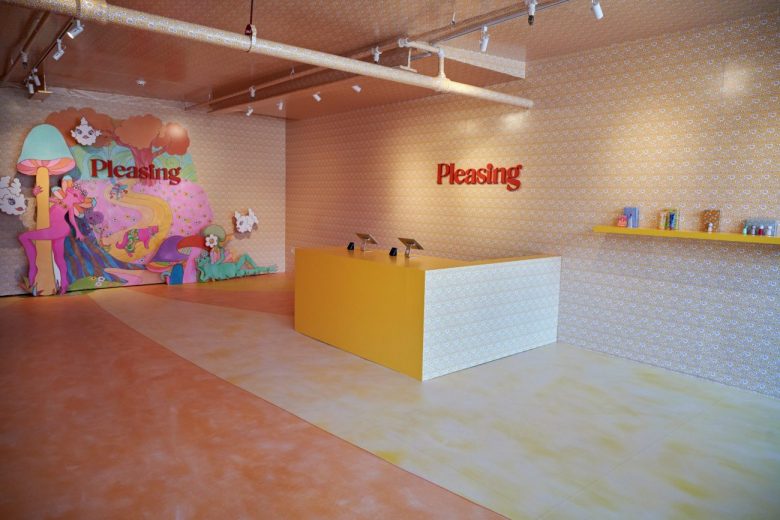 So I went. I arrived at 345 Broome Street a little after 10 a.m. on March 15 to preview the space as press, six hours before it would open to the public. I found around 10 people, mostly women and young, already waiting. I spotted Pleasing merch and Harry Styles tour apparel.

When I stepped into the space, it felt quite bare. The back wall (pictured above) is a psychedelic tableau — you’ll surely see it all over social media. To the left is a rack of gender-neutral merch in pink and blue and yellow. To the right, a tiny shelf that features the six products in the new drop: four new shades of nail polish, an exfoliating serum and a hand and nail balm. Other than the cash register, the space leaves room for a crowd, which it will need. The pop-up’s lines stretched multiple city blocks, proving the power of Styles’s brand, even without him physically present.

Though I’ve reported on celebrity beauty brands for years, it still fascinates me to see how fans receive them and how much they do — or don’t — care about them. In Pleasing’s case, the answer is a lot.

I spoke to four fans outside the store, who had at least seven hours of waiting ahead of them, about why they were there. Two were there together but had become fast friends with the other two. My first question for the group was why they were not in school. “I did, in fact, email my directors that I would be missing class today,” said Pip Jones, 18.

“So, what brings you here?” I asked, prepared, but not fully for the emotionality of the responses.

Feldman had purchased the first “drop” in its entirety: a $140 set including four nail polishes, a dual-ended lip and eye pen, and an illuminating serum. “I’m really privileged that I could afford that, without it being a stretch. It’s a lot for the whole thing. But I don’t regret it,” she said.

The new group of friends was ready to spend more, too. Ali Bebry, 21, had intentionally kept her nails unmanicured so that she could use one of Pleasing’s new shades upon purchase. There are four new shades — a pale green, a beige-pink, a bright true red and a holographic glitter. The set of the four will cost $65.

I also asked if it felt cliché to see another celebrity beauty brand or if their love for Styles was enough to differentiate Pleasing from the pack. “It can be kind of cliché when celebrities release brands,” Bebry said. “But I massively appreciate the effort put into Pleasing to kind of separate from [Styles]. Obviously, people know about it on a mass level because he’s behind it. And now with Mick Fleetwood … wow,” she said, referring to the Shroom Bloom campaign starring the musician. I wondered aloud if this crowd was too young to know Fleetwood, but I should have known better. They followed Styles to his musical idols and followed suit in fandom.

“It’s nice to know he’s working with an ethical supply chain, sustainable materials and smaller artists — and the nail artists he works with to do advertisements are all smaller creators,” Bebry said. “It’s not just something where it’s him on a picture holding a bottle of nail polish saying, ‘Find my brand.’ It’s him putting his time behind a brand that means more than just him.”

The longer we spoke, it was hard not to buy into their enthusiasm. Parasocial relationships aside, even the skeptic in me was moved by their belief in Styles and the way he had inspired them through his music, advocacy and earnestness. During his recent tour, he made constant headlines for helping fans come out and telling a fan not to text a guy who was not nice to her.

“It’s so exciting to be a Harry fan. You meet friends and everything, but he inspires me every day to be a better person. Like, ‘‘Treat People With Kindness,'” Jones said, before adding, “He advocates for everybody. He advocates for human rights. I feel lucky to be a fan and lucky to live in a city where we get opportunities like this.”