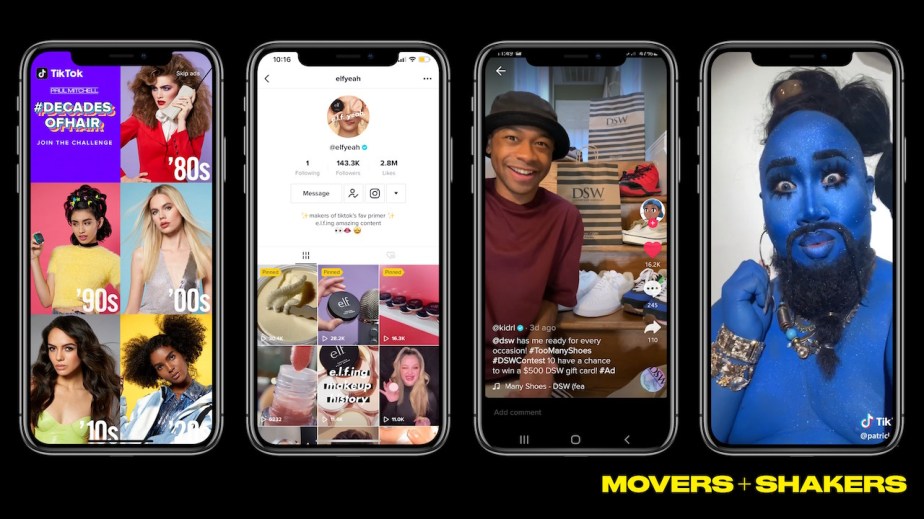 The TikTok whisperers: Creative agency Movers + Shakers on how to earn billions of views

A high school reunion is normally a chance to see an old crush or learn who peaked early in life, but for one boutique creative agency, it was the start of what would become the most popular U.S. TikTok campaign to date.

In 2019, the CEO of Movers + Shakers, Evan Horowitz, ran into the vice president of E.l.f. Cosmetics, Gayitri Budhraja, at their 20-year high school reunion in Los Angeles. “[Budhraja] was impressed by the business that they had created in bringing brands to life through music and dance,” said E.l.f. CMO Kory Marchisotto. Horowitz co-founded the company, which focuses on music-centered campaigns, in 2016 with Broadway performer and current company CCO Geoffrey Goldberg. They started out making musical campaigns for YouTube, Instagram and Facebook. At the time that Budhraja and Horowitz reconnected, Movers + Shakers had not yet ventured into TikTok.

E.l.f. was “super attracted to the idea of using music to express their brand,” said Horowitz. “They’d never done that before, and they were interested in TikTok because E.l.f is a very visually disruptive brand. They love to be first to market.” As they worked together on the concept for the musical campaign, “we all put two and two together,” he said. “TikTok is a platform that’s all about using music and dance.”

And so the #eyeslipsface campaign was born, receiving over 5 billion views and becoming the most viral U.S. brand campaign on TikTok in any category, beauty or otherwise. The success of that campaign — the first major beauty campaign the company had done on any platform — has propelled Movers & Shakers to become an agency heavily focused on TikTok. It has since seen high demand for its services, going on to work with NYX Cosmetics, CVS Beauty and Paul Mitchell, and E.l.f for two additional campaigns. And its racked up staggering viewer and engagement numbers each time.

“We’ve been growing exponentially,” said Horowitz. “And we still have to turn away brands. When we started on TikTok, you could you could count on two hands how many brands were active on the platform. Every month, we’ve seen more interest in people getting on the platform, so it’s become a lot more crowded, for sure.” He also noted that slots for challenges are limited in number and harder for brands to secure as more brands become interested in them.

Movers + Shakers’ most recent TikTok campaign created for E.l.f., #elfmagicact, launched on July 23. It features an original song called “Magic Act” by M. Maggie, who also created the song for E.l.f.’s second campaign and NYX’s #butterglosspop campaign. Featuring top TikTok influencers including Chase Hudson, Leilani Green and Lauren Godwin, among others, the campaign has reached 1.7 billion views and 750,000 videos have used the campaign hashtag. With a “shop now” button on the campaign page, it has also led to a sales boost of E.l.f.’s Poreless Putty Primer, said Marchisotto.

Original music is the agency’s key to creating a viral TikTok campaign.

“From the beginning, a lot of our campaigns were about: How do we bring a brand to life through music? How can music be part of that storytelling?” said Goldberg. “For TikTok, obviously music takes on a life of its own. And it’s not just music for the sake of storytelling, but music on TikTok is part of pop culture.” The “Eyes.Lips.Face” song for E.l.f.’s first campaign, which was created by Holla FyeSixWun, Grammy-winning producer iLL Wayno and Republic Records, hit No. 4 on Spotify’s global viral list when it launched.

Movers + Shakers works with a network of artists, music producers, performers and vocalists.

“Because of this network, it allows us to really choose the perfect songwriting team and vocalists for any specific projects that we have,” said Goldberg. “We’ll start with trying to understand what’s the goal of the campaign, what’s the brand voice, what kind of music do we want to create for that. Then we’ll work with the artists that we have on a roster and through our network to build out that sound together.” In addition to hip-hop artists, the brand has also worked with musicians to create Broadway musical-style songs.

While original music is nothing new to advertising, songs written for TikTok aren’t the typical jingles of the past. “Jingles weren’t trying to be on a Spotify playlist,” said Horowitz.

With so many brands flooding the platform, Horowitz said that now is the time to act: “By 2021, pretty much all the brands are going to be there. A brand like E.l.f. that has been on the platform for a year is just light-years ahead. in terms of understanding its success and engaging with consumers there. There’s still a window of opportunity, but it’s closing before it just becomes another mainstream platform.”