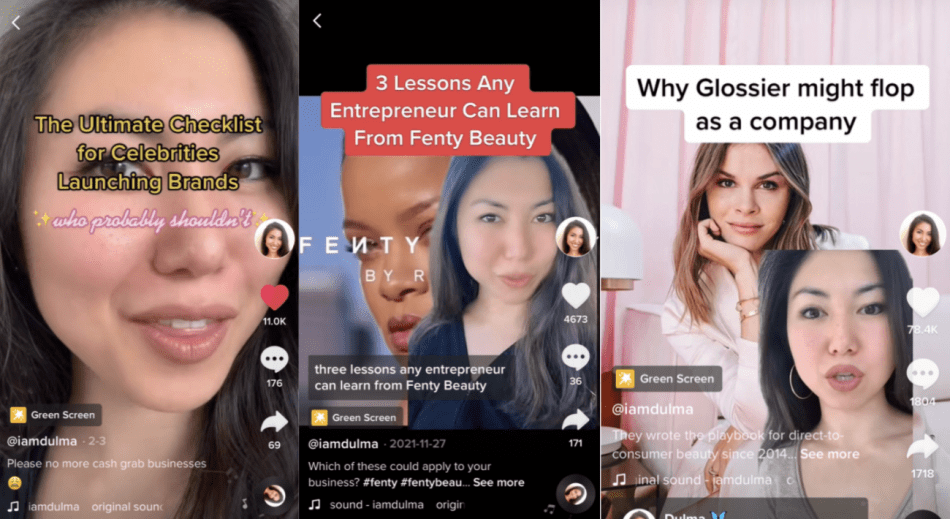 By now, we’re all aware of the current “vibe shift” underway.

This shift in aesthetics has gone hand in hand with a move from Instagram to TikTok that has been well-documented and discussed on Glossy and beyond. (See some examples: here, here and here, to start.)

With a change in aesthetics comes a change in tone, and right now, that means radical transparency — and not in the way DTC brands once tried to define it.

People follow influencers for different reasons, but the glitz of seeing someone’s highlight reel has, for many viewers, worn off. People are searching for more transparency. (That’s part of why so many influencers are now building brands.)

This desire for no-b.s., tell-it-to-me-straight content helps to explain the rise of a new type of influencer. For example, there’s the fashion influencer who doesn’t care that she doesn’t meet conventional beauty standards or unabashedly films in front of a messy bedroom.

Perhaps the most interesting manifestation, however, is the rise of the “business influencer.” I’m adopting this as a general term to describe people who use TikTok to host their ongoing masterclasses of sorts. A personal favorite is Dulma Altan, who goes by @IAmDulma on the app. Her bio brands her account as such: “TikTok B-School for women 🎓.” She has 51,000 followers and has amassed over 1.4 million likes on her content.

Her videos, which she started posting purely for fun, span topics including the difference between a founder and a CEO, in-depth analyses of brands like Glossier and Pleasing by Harry Styles, and bold statements, as in “8 celeb brands that won’t last.”

Altan is a 29-year-old graduate of Brown University and an entrepreneur. She shuttered her first startup, a fragrance discovery company called Potion, and now focuses on Makelane, which is an online masterclass for female entrepreneurs. Her TikTok quickly accelerated her career and her personal brand. As the social media platform has grown, Atan has received inquiries from fellow entrepreneurs who either want her advice or want toto hire her as a consultant.

She does not consider herself an expert on beauty, but is instead well-versed on DTC. “It’s more of a fascination with the art of crafting a brand and storytelling,” she said. “Beauty as an industry is so amenable to that.”

Altan got her start in a way that, even after a relatively brief time spent chatting on Zoom, feels extremely true to who she is. She grew a following on TikTok after challenging herself to create content on the platform for 100 days. Initially, she hopped on trends, but her TikTok audience remained stagnant. Her roommate, who manages YouTube creators as a job, gave her some valuable advice in the form of a simple question: “What do you actually want to post about?” Altan’s response was, “​​I want to nerd out about business and brands,” but she didn’t think there was an audience for such content on TikTok. “I was like, how do I find the intersection of what works on TikTok and what I like to talk about? I saw that a lot of big accounts were talking about the Kardashians, so I thought, ‘OK, I’ll talk about the Kardashian brands,” she adds.

In October 2021, a video Altan made about Kris Jenner’s life got 60,000 views. Many videos later, all posted on the same day, she rolled out “7 embarrassing Kardashian business flops you might not know about,” which got 2.4 million views. From there, the growth was fairly immediate, Altan recalled. “I used celebrity as a Trojan horse for talking about business on TikTok.” From there, she went to “Skims and Spanx and female-founded brands, in general.” Content about Glossier also performed particularly well, Altan said. A November 2021 video she created titled “Why Glossier might flop as a company“ has over 615,000 views. Altan said, “Executives from consumer brands or investors tell me they found me through my Glossier videos.”

Altan’s audience is split between industry folks and consumers. On one hand, entrepreneurship (especially when it involves a bit of scandal) has gone mainstream — just look at some of the most-talked-about new television shows. “The Dropout” tracks Elizabeth Holmes’ journey from entrepreneur to scammer as the founder of Theranos, while “Super Pumped” looks at Uber, and “WeCrashed” shows the fall of WeWork. According to Altan, “There are a lot of normal people who don’t have businesses or don’t even have an aspiration to start a business, but they’re really interested in my content. People are starting to get fatigued by a lot of companies that are more hype than substance.” For example, videos where Altan names celebrity products that strike her as cash grabs are sure-fire hits. This post is captioned “Please no more cash grab businesses 😩.”

On the flip side, she also believes TikTok has barely tapped into its potential as a B2B resource, though this may change quickly as it prepares to introduce 10-minute videos. This move has been controversial, but Altan is a fan, because “I have a lot to say.”

“Most people think, ‘[Tiktok] is just lifestyle influencers talking about funny things and doing dances.’ But actually, because the platform matures year over year, we’re gonna start to see a lot of more business content on TikTok.”

An all-encompassing guide to a vibrant new economy: the world of influencer-founded brands.

Queen of the headband, Jennifer Behr, tapped hairstylist Nai’vasha for a collaboration of dramatically powerful headpieces. The duo has worked together before, namely on custom hair accessories for Alicia Keys at the 2020 Grammys. The collection, which launched on Wednesday, was inspired by and celebrates “the idea of the female warrior – a muse of strength and beauty,” according to the brand. Prices range from $98-$2850.

For its first collaboration, Fempower Beauty (which, on Instagram says it is “healing the harms of the beauty industry with luxury products and services that affirm and uplift”) teamed up with influencer Blair Imani (481,000 followers). Imani co-created its newest launch, the Smarter Lip Sets. There are six of the double-sided lip products, each featuring a matte and dewy color. Each comes with an affirmation, like “I am abundant,” “I am loved” or “I am human.”

Why is everyone becoming a redhead?