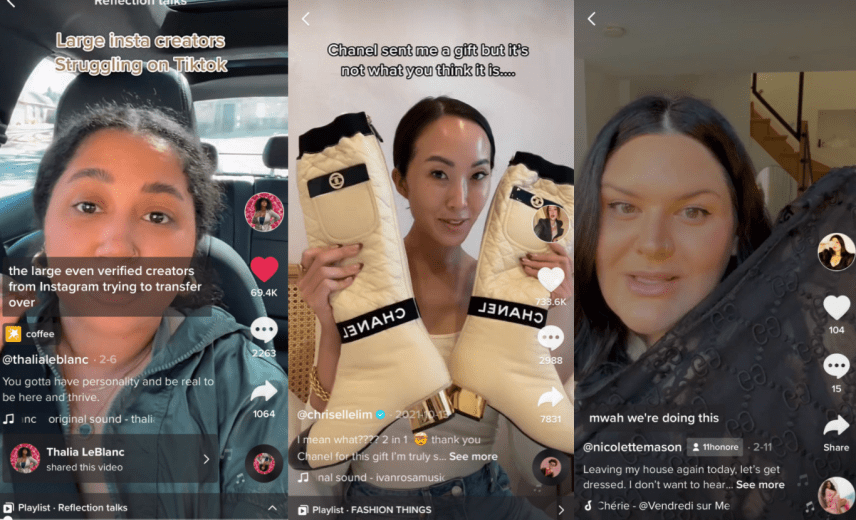 We’re approaching the second anniversary of Covid abruptly changing our lives and the world. For many, the past two years have delivered periods of immense isolation that have been alleviated, at least in part, by turning to social media for a feeling of connection and community.

In short, it hasn’t been a time to view the world through rose-colored glasses. Covid’s countless impacts will one day fill books — but one most relevant to the beauty and fashion industries, and the influencers in both spaces, has been the meteoric rise of TikTok. With it has come shifts in how we communicate and what we look for from influencers.

Broadly speaking: There is more room for comedy, there is less room for perfection. You can cry on camera. And in some circles, you could say the flat lay is dead.

So what does this mean for the millennials — specifically, the creators who invented “creating” as a career — and did it all on Instagram.

Before I give off the impression that TikTok has entirely democratized influencer culture, it’s important to note that, unfortunately, that is not the case. In 2021, the top earners on the app were still primarily thin, white, conventionally attractive influencers. They included Addison Rae and Charli D’Amelio.

Still, TikTok does paint life more realistically, overall. A big reason is that Gen Z is unafraid to showcase imperfection and emotion.

Thirty-year-old Thalia LeBlanc has been creating content on various social media platforms for the past decade. Though she has just over 22,000 followers on Instagram, her TikTok following has ballooned to 487,000 followers since June 2020.

I found LeBlanc through a video she made speaking about why she believes so many Instagram influencers have not been able to successfully transition to TikTok. We hopped on Zoom to further discuss the topic. “A lot of large creators on Instagram —even the verified ones, the OGs in the game — are struggling to transfer over onto TikTok because it’s just a totally different platform. It requires a lot more authenticity, transparency, vulnerability. And on Instagram, especially with beauty and fashion creators, they’re so used to making these perfectly curated aesthetic feeds. All their posts are perfectly planned. There are even apps to plan how the grid is gonna look,” she said.

Of course, that’s not to say there aren’t Instagram-based influencers who are also authentic. They just may have a different set of skills than those that TikTok requires. Nicolette Mason (211,000 followers on Instagram) has been blogging since 2008 and on Instagram since its launch in 2010. She said she loves TikTok as a consumer and is particularly a fan of fashion and beauty industry critiques on the platform. It’s come to take on the role formerly held by “a lot of long-form media,” she said. “[That content is] now being packaged into these great three-minute videos.”

As a creator, however, she said, “It’s definitely not my platform — at least, not yet. And I’m very self-aware of that. A big part of it is because I come from a writing and publishing background,” she said. Mason had a print column in Marie Claire for five years. “Video, video editing and recording is not necessarily my skill set.”

Of course, it doesn’t help that Instagram is increasingly trying to emulate TikTok by pushing Reels on creators. (The app has been prioritizing Reels via its algorithm.) Mason said that, when she does make Reels, they often don’t perform well, nor are they what her audience wants to see. “The pressure and rush to homogenize all content and to make the platforms similar does a disservice to creators. It also does a disservice to their audiences that are not necessarily looking for the same types of content,” she said.

Julianne Fraser, founder and CEO of influencer marketing agency Dialogue New York, echoed the sentiment that “realness” is what resonates on TikTok. “Tiktok emerged during the pandemic, answering calls for more real, relatable and authentic content from the creator community,” she said. “Veering away from Instagram’s polished and aspirational content — which triggered people stuck at home and unable to live adventurously — Tiktok videos [instead] go viral based on creative formats, humorous topics and relatable realness.”

Mega-influencer Chriselle Lim is one of a small group of “OG influencers” (she started her blog in 2011) who has exceeded her own Instagram following (1.4 million followers) on TikTok (2.8 million followers). That is thanks, in part, to the playful, fictional “rich mom” character she sometimes plays on the app.

“I’ve always been an early adopter because I’m always curious. So I just downloaded it. And I just started testing it out. And I was like, ‘OK, this is cool. But I don’t know if I can commit to this right now.’ But it was when I went to fashion week — in February of 2020, before the world shut down — that it blew up for me,” Lim said. “[The TikTok kids] called me the rich mom. The community on there didn’t know me from Instagram. They’d be like, ‘Who is this rich mom? Why is she at fashion week?’” Lim said she gained thousands and thousands of followers at rapid speed.

She thought it was hilarious and “just went with it,” she said. “The kids still call me Rich Mom, like when they see me on the streets in Paris. That’s like my name there,” she said, speaking to the app’s power.

“When we went into lockdown, I took that rich mom narrative and built up these funny skits for about a year. And people were looking for entertainment sources of sarcasm; they wanted to laugh. It was easy for me, because I was being silly; I was being myself, and people thought it was humorous. And so it took off during Covid,” she said, noting that she has since mostly abandoned the persona.

Still, she attributed her success to the fact that she was genuinely having fun. “That’s the key. If you’re having fun and not putting that much thought into it, and it feels effortless, that’s what TikTok wants. They really can tell when it’s coming from a place of authenticity and being yourself, versus spending hours on it and curating it. For the most part, that doesn’t resonate with the TikTok audience. For some of my best videos, I just turn on the camera and just talk. Those are the ones that have millions and millions of views, because it’s authentic. That’s the biggest difference of being able to grow a TikTok following, versus on Instagram.”

There’s a mindset switch required, Lim continued: “When you’ve been doing Instagram for so long, your mind naturally goes into a place of perfection, like, ‘How do we curate this?’ So you have to undo and unlearn a lot of things that you were taught. And that’s hard for a lot of OG creators.”

This week, we’re covering just about everything in the new Barbie Style collection. For the capsule, Barbie Style (an Instagram account with 2.2 million followers, celebrating Barbie’s iconic sense of style) partnered with six female-founded brands. The products include the cutest Barbie-pink Larroudé heels and matching clutch; a candle in a pretty-in-pink vessel by AAPI-owned Nette that’s appropriately called “Dream Land” and a hot pink fleece from Dudley Stephens. Best of all, Mattel will donate 5% of the collection’s proceeds to the Barbie Dream Gap Project.

Not one, not two, but three “celebrity beauty brands” launched this week. You can read our coverage of Scarlett Johansson’s The Outset below. On Thursday, Gwen Stefani’s new makeup brand, GXVE, made its Sephora.com debut, and supermodel Winnie Harlow launched Cay Skin on Wednesday. The collection of SPF products will launch at Sephora later this month.

Scarlett Johansson on her new skin-care brand, The Outset

Beauty influencers are getting into NFTs and the metaverse

The lifespan of a micro-mini trend

How beauty products get picked for your favorite on-screen characters