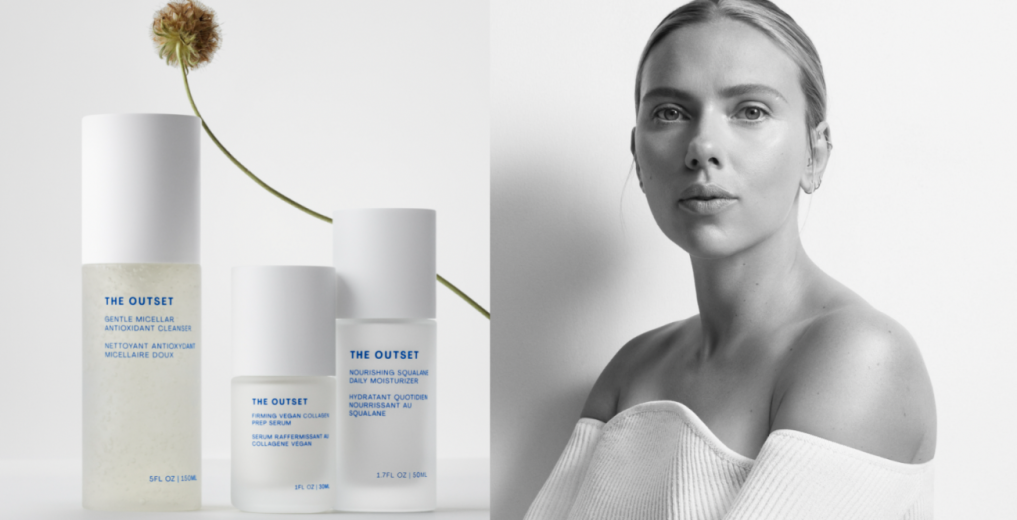 Scarlett Johansson on her new skin-care brand, The Outset

On Tuesday, Scarlett Johansson joined the ranks of many A-list stars by adding “beauty brand founder” to her resume. But unlike many of her peers, Johansson — who, notably, does not have social media — has spent considerable time talking to media about the launch. She will appear on the Glossy Beauty Podcast next week and, this week, she’s spotlighted on the beauty podcast Gloss Angeles. Her Vogue interview about the brand went live last week.

The brand is called The Outset, and its white and navy packaging is minimal and laidback, matching Johansson’s approach to skin care. She co-founded the brand with entrepreneur Kate Foster, though she had been working on it for years before meeting Foster. They are building the brand independent of, say, a L’Oréal, but as WWD reported, they have funding from The Najafi Companies, which also financed Beach House Group, the brand incubator behind Tracee Ellis Ross’s Pattern among others.

Initially, Johansson said on Zoom, “I was encouraged by people in my business to license my name and work within a larger corporation. That’s just because, from other people’s perspective, it seemed like a massive undertaking to just start without any kind of infrastructure in an industry totally unfamiliar to me. And that definitely would have been easier.”

But after meetings with a number of major potential partners, Johansson realized that such a partnership would relegate her to the kind of things she wanted to avoid in her new endeavor. “[I would be] inheriting the same thing I was trying to get away from, which were shareholders and the responsibility to [meet] other people’s standards of success. I’d be working with people who were simultaneously working on other brands and trying to differentiate from those brands,” she said.

After an encouraging conversation with a consultant for one of those aforementioned big companies, she decided to go for it on her own. “It just felt like it would be more rewarding in the long run to take my own path,” she said.

Johansson struggled with acne from a young age, from the moment she was “pubescent,” she said. “[I was] hyper-aware of how the way my skin looked on any one day affected my sense of well-being. And maybe because I’m in the public eye, it was more amplified in a way,” she said. Still, she believes skin care should be simple and approachable, and according to internal research done by her team, so do many others.

In a survey of 500 participants reflective of the average U.S. prestige skin-care customer, The Outset found that 96% are
generally happy with their skin, 80% “want a simple routine,” and 80% want “clean skin care that works.”

Putting out new products is counter to the notion that we have enough available, and Johansson acknowledged that the space is crowded.  To that end, she said, “We are about paring back and returning to the essentials. This mindful approach is carried through the whole line, whether it’s [in] our sustainability or the causes that we support, like Dress For Success and One Tree Planted.”

Many consumers have become wary of celebrity brands — just look at the comments on a Trendmood Instagram post. So, in order to succeed, those behind the brands need to think (far) beyond their famous founders. That’s why The Outset’s most essential characteristic is its focus on “simplifying and demystifying clean beauty,” Foster said.

“We learned that customers were really struggling to find clean products they want and clean, nontoxic products that are also effective,” she said.

In the development process, the duo considered more experimental product formats, like a self-warming mask. “I forgot to tell Colin [Jost, her husband and “SNL” star] that it was self-warming and he thought his skin was melting off,” Johansson said. Funny anecdote aside, it served as a reminder for Johansson that the most important thing is to first nail those daily-use products.

“Our, tagline is ‘begin again,'” she said. “It’s like every day is an opportunity to start fresh. And when I think about skin care… The first person you see is yourself, and every day, you have the ability to reconnect with yourself and state your intention, refocus and restart and recharge. And I hope that’s a moment that people take with our brand.”