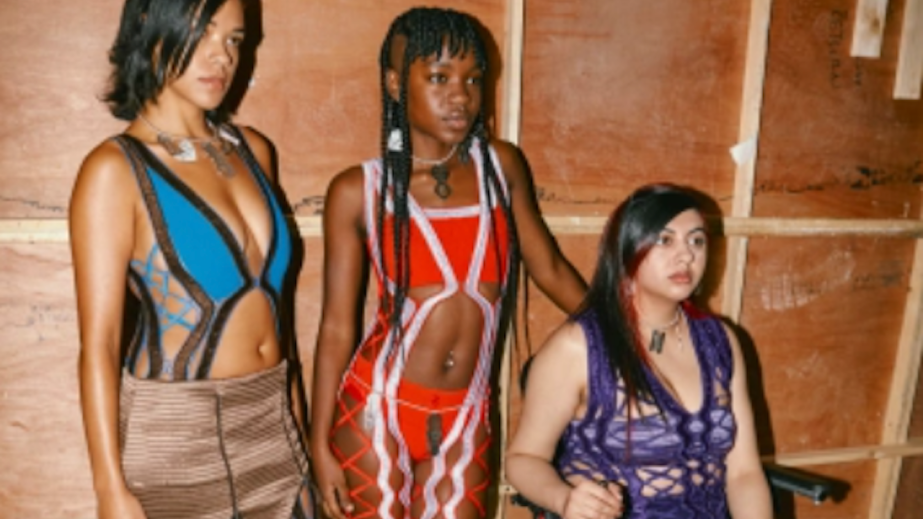 LFW Briefing: Richard Quinn’s homage to the monarch and the future of showrooms

With Quinn receiving the inaugural Queen Elizabeth II Award for British Design back in 2018, the first part of his show was a tribute to the monarch: Mourning black pieces, veils and crowns were presented in an all-black room.

In addition, the day featured two Greek designers, First was the 4-year-old brand Eftychia, which has become known for relaxed tailoring. It introduced denim to its collection this season. The second, Di Petsa, has been creating custom “wet-look” dresses for customers and celebrities like Kylie Jenner and Gigi Hadid since its inception in 2019. The styles remain the core of its business.

Other newcomers included Susan Fang, whose signature is joyful tulle collections. She became the first Chinese designer to collaborate with H&M on a dedicated collection for the Chinese market in January. Meanwhile, Chet Lo’s collection featured wearable suits and accessories, building on its pointy knitwear loved by Lizzo. And Sinead O’Dwyer presented commercial plus-size clothing on one of the most diverse casts at LFW this season.

Designer Max Zara Sterck, known for her cutout tops, hosted a digital presentation to mark her brand’s first season in wholesale. “I moved the core of the business from London to Amsterdam, and I am slowly expanding the team,” she said. “Before, I only made custom pieces. This year I officially opened my webshop and, since then, I’ve received orders from women of all ages internationally.”

The last designer of the day, Richard Quinn, went from being the go-to designer for printing textiles for houses like Burberry and JW Anderson to launching a wholesale business and a stream of collaborations; the brand’s collaborated with Liberty department store in London, U.K. high-street brand Debenhams and Tommy Hilfiger, with whom the designer created a collection earlier this month. As with other LFW designers, Richard Quinn has a growing luxury client base in the Middle East and hopes to expand more into lifestyle categories in the future.

Other big names on Tuesday included Emilia Wickstead, who showed her spring 2023 collection vi a runway show in her brand’s new store on London’s Sloane Street. The flagship store, which opened in August, is set to be a central hub for the brand, whose private bridal and luxury customers make up a significant portion of the business. And the store’s location and showroom, offering dedicated appointments, are likely to attract new local luxury customers to shop the brand.

“It was always my intention that we would do an event here with a film screening,” said the designer. “I’ve loved filming and directing our [digital] shows because the films become global, everyone sees them. However, that doesn’t mean we won’t do a [physical] show again.” The Emilia Wickstead spring 2023 collection, inspired by Man Ray and his muse, included new tulle bags and an expanded collection of shoes and practical silhouettes, going beyond the brand’s signature dress range.

“We’ve got these transparent gauze shopping bags, which you saw piped in satin on the runway,” said Wickstead. “We’ve also got a bigger array of shoes, so a much bigger and wider range of styles. And we’re adding underlayers, with the satin bras shown under the dresses.”

She added, “The brand is always shifting to make sure we fit different kinds of customers.”

The Emilia Wickstead brand includes bridal wear, homeware and casual wear, including a denim range that the company will be expanding in the coming year.

For emerging designers, showrooms and catwalk shows can be an expensive cost to take on. Irish designer Colin Horgan decided against doing a catwalk show. He instead worked with creative technology collective The Immersive Kind to showcase his spring 2023 collection, titled “Imposed Faction,” in Spatial, an exhibition-specific metaverse space. There, buyers and press were able to get up-close looks of the distortion-inspired catwalk looks, the pieces’ technical craftsmanship, the hair and makeup looks, the bustling backstage, post-show interviews and related playlists.

“[Spatial] allowed me to reach more press and buyers and give that bespoke experience that can’t be replicated with a physical show,” said Horgan.

The designer said that the platform’s included wholesale management software also proved helpful and will likely prove a valuable tool for designers more comfortable with managing the creative side of their company, versus the business side. “[With it] I can see what stores have ordered what [pieces], and it gives a very clear breakdown of the sales and the key pieces that were sold,” he said.

Aileen Carville, CEO of creative metaverse companies SKMMP and Asset Haus, coordinated the metaverse experience on behalf of Horgan. “The virtual showroom is the most portable way to set up and start selling at the start of fashion month,” she said. “Pre-orders and appointments can be made as soon as the collection is launched.”

Once a collection is uploaded to a virtual showroom, the assets needed to make B2B sales and fuel PR are automatically generated, Carville said. The idea hints at the showroom of the future, where automation and technology will be part of the selling process from the beginning.