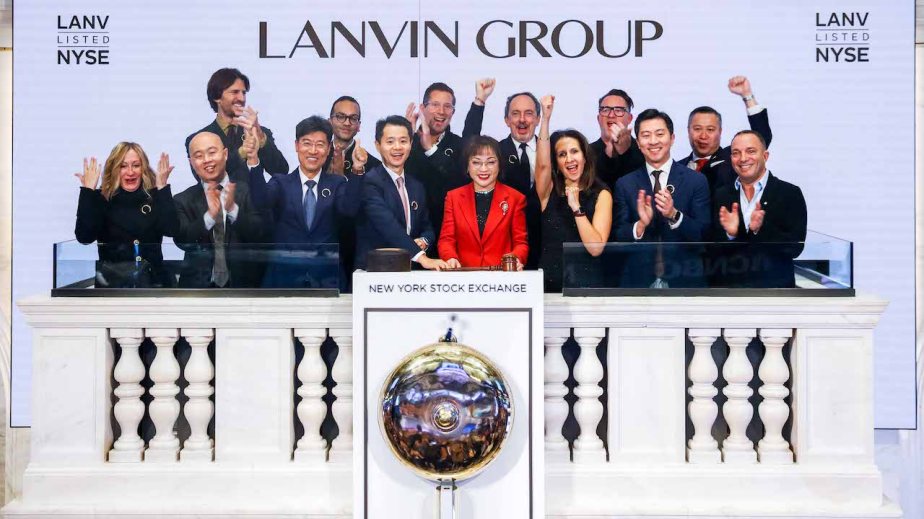 On Thursday morning, Lanvin Group executives, board members, shareholders and business partners lingered on the New York Stock Exchange trading room floor following the ceremonial ringing of the bell announcing the company’s public status, achieved through a SPAC listing. As they watched the stock price inch up — reaching $22.81, an increase of more than 130%, at one point — excitement was in the air.

That was even as red text dominated surrounding screens and reporters’ phones lit up with notifications from news sources citing the DOW’s fall by more than 300 points. It eventually closed out its worst day in three months.

But Lanvin Group and co. held hope that the company would hold up as an exception, on many counts.

Seeing the stock hit the +30% mark early on fueled buzz: One executive pointed out that Zegna, the last fashion company to go public, in December 2021, closed its first day of trading up just 4.2%. Another noted that “the SPAC market has been terrible for the last six months,” and that “most SPACs have entered the market at 80% down.” One worker said the milestone moment of launching on the NYSE on a high note served to stamp the Group’s positioning as the “biggest luxury conglomerate to come out of Asia.” Joann Cheng, Lanvin Group chairman and CEO, later stressed to Glossy that Lanvin Group is not an Asian company, but rather a global company, regardless of its Shanghai headquarters. China only accounts for 10% of the Group’s revenue.

But attention around the state of the $10 stock soured by the day’s end, with shares closing at $7.37, or down around 26%. It wasn’t surprising, solely based on the market’s recently erratic state. By Friday, the stock had rebounded to $10.

Cheng’s leadership was arguably proven on Thursday, sticking to a “let’s-wait-and-see” response throughout early interviews and a press conference involving questions about the stock’s early traction. And she exuded confidence when drilled about the current state of Lanvin Group’s brands and their direction from here.

Lanvin Group, known as Fosun Fashion Group until October 2021, owns French couture house Lanvin, American luxury company St. John, Austrian hosiery company Wolford, and Italian brands Sergio Rossi and Caruso, the latter of which specializes in men’s suiting. It acquired footwear brand Sergio Rossi in 2021. Together, the brands are expected to do about $425 million in sales this year.

The main ideas in Lanvin Group’s post-IPO plans are expanding its brands’ retail footprints, elevating their digital presences and entering them into new product categories. Cheng said ready-to-wear-focused Lanvin will set its sights on shoes and leather goods, for example. In addition, she called the U.S. and China “low-hanging fruit” for the Group’s brands, considering the amount of business both markets have driven for competitors while only making up a low-double-digit percentage of the company’s total sales.

Earlier this year, Lanvin Group revealed a goal of becoming profitable by 2024.

Rather than immediate gains for Lanvin Group investors, Cheng set expectations around longer-term growth, fueled by increased operational strength and the brands’ established equity. Investment in the Group’s current portfolio is the priority, she said. Additional brand acquisitions are of interest, if the company is positioned to go there.

“We are not a short-sighted management team that wants to drive short-term value,” Cheng told Glossy.

In a meeting room preceding a noon press conference, David Chan, Lanvin Group executive president and co-COO, described the company as “lucky” and “fortunate,” as he listed recent, positive news developments for fashion brands, particularly those targeting Asian consumers. Among them were the retirement of China’s zero-tolerance Covid policy, the “easing” of the U.S.’s Consumer Price Index, and the signed agreement between the U.S. PCAOB and Chinese authorities.

Regardless of economic changes, Lanvin Group’s established roadmap will remain intact, Cheng said. On the same note, she was sure to state that the “IPO is not a purpose” of the company, but rather a milestone, allowing it to stay its course.

Along with Lanvin Group launching on the NYSE under the ticker LANV, Thursday marked the company’s merger with the Primavera Capital Acquisition Corporation SPAC and a raise of more than $150 million in fresh capital. “It’s enough for us to operate the brands until our profitability,” Cheng said. She also shared that a majority shareholder had converted a loan into equity, making Lanvin Group debt-free.

Cheng took on the role of Lanvin Group CEO in 2018, following the acquisition of Lanvin by Fosun Fashion Group. It was a smooth transition from her leadership position at parent company Fosun International, an international investment conglomerate. Before working for Fosun, she held positions in accounting and finance.

Of course, a firm plan isn’t always the right plan. And while Cheng has a clear vision for growing Lanvin Group and strengthening its luxury positioning, its effectiveness remains to be seen. In talking with the Group’s various brand leaders, it was clear that they’re along for the ride. But it was also apparent that they’re entering new territory. Bets are being made, and there’s much work to be done.

Wolford co-CEOs Silvia Azzali and Paul Kotrba both admitted that hosiery, Wolford’s specialty, is “not a big growth category.” As such, it’s leaning into leggings, launched as part of a new athleisure offering in 2020. According to Azzali, leggings are a part of Wolford’s DNA, as women’s legs are the company’s expertise. But, while they’re “selling very well,” she said, and something new for the company, they’re not a new concept for consumers.

Along the same lines, St. John deputy CEO Andy Lew addressed the fact that his company is known for women’s power suiting, at a time when a business formal uniform has fallen out of fashion. To balance out its product assortment, St. John introduced a line in November called the Foundation. Its focus is everyday wardrobe essentials that can be mixed and matched with dressier pieces. Denim, T-shirts and even a jean jacket are among included pieces, ranging in price from $200-$1,900.

For its part, Caruso has benefitted from being unpopular, in the traditional sense, CEO Marco Angeloni seemed to say. The company’s spent “zero” in communications and marketing in the last few years, as “word of mouth” through the buyers and sales associates at its 200 specialty retail partners have worked to drive sales. Its biggest markets, based on revenue, are the highly competitive Italy and Japan. “We’re men’s best-kept secret,” Angeloni said.

While Lanvin Group brands’ equity and DNAs are strong, as noted by Cheng, providing newness is sure to become more important for them, particularly as the Group goes after Chinese consumers, known for their love of novelty.

The Lanvin brand is already making good progress on that front.

“The work has begun in reframing the product, repositioning the brand in the global marketplace and poising it for the kind of growth it deserves,” said Siddhartha Shukla, deputy gm of Lanvin.

The brand is relocating its Madison Avenue flagship in April, simultaneously introducing a larger, more focused “boutique” store concept. Lanvin’s Rodeo Drive store will be refreshed with the concept by early 2024, followed by others. In addition, the brand has plans to expand its retail footprint in the U.S., Shukla said. It currently has seven stores in the states and 27 worldwide.

Cheng hinted that attracting bigger-name creative directors to Lanvin Group brands is a goal. “[Going public] will get us more exposure … which will help us recruit talent,” she said.

For one, Lanvin creative director Bruno Sialelli is relatively unknown. As the Financial Times noted, in 2021, the Lanvin brand reported revenue of €73 million, just one-third of its sales when Alber Elbaz was creative director in 2011.

In the immediate future, St. John and Sergio Rossi have plans to lean on celebrities and edgier brands to drive buzz. Robert Muzingo, St. John’s head of e-commerce and online marketing, said St. John’s spring campaign will focus on values, with screenwriter Shonda Rhimes as the face. In February, 70-year-old Sergio Rossi will have a presence at Area NYC’s fashion week show, which will showcase the brands’ collaboration, according to Sergio Rossi CEO Riccardo Sciutto.

Overall, Lanvin Group brands are preparing to hit the gas — but they’ll do so responsibly, Shukla stressed. How they’ll fair remains unclear — but the same can be said of any fashion brand in the current landscape.