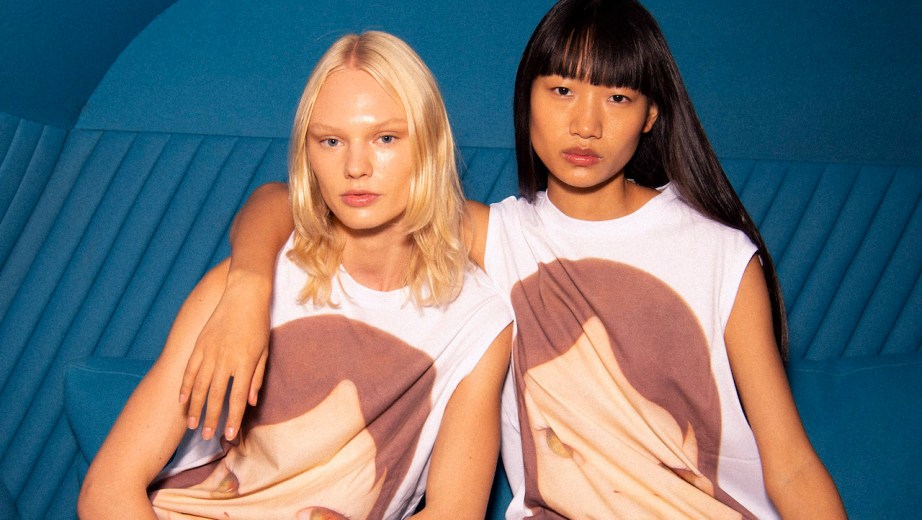 The second collaboration between Stella McCartney and Japanese activist-artist Yoshitomo Nara launched earlier this month with a focus on connecting with young generations.

Available through March 2023, the collaboration’s included styles combine Stella McCartney’s signature silhouettes and sustainability credentials with Nara illustrations reflecting his go-to themes of youth and rebellion. With the designs, the brands aim to reach Gen Z through shared passions in the activism and aesthetics featured. Anti-war messaging, including “No war” and “Stop the bombs,” plays out throughout the gender-neutral collection, on styles including sweats, sweaters and pajama-inspired separates. Also included are Nara sketches of children, animals and children dressed as animals.

“In this collection, we engage with not only our own core values related to environmental awareness, but also with the ever-so-present cheeky manner of expression found among today’s youth,” McCartney told Glossy. “Yoshitomo Nara is a master of provoking thought through very idiosyncratic design choices and motifs, much in the way favored by today’s youth.”

She added, “The rise and prevalence of social media in today’s youth culture has given us a generation of young people who are far more informed on the issues than ever before. This consciousness, particularly with respect to environmentalism, is inspiring and emboldening for designers such as myself, who have fought over the years to raise awareness of these key issues.”

The fashion brand and artist first teamed up for a spring 2021 collection, which marked Nara’s first-ever collaboration and sold out. The new collab, priced from $390 for a T-shirt to $1,790 for a cardigan, will be complemented by pieces featuring Nara’s work within Stella McCartney’s core spring 2023 and kids’ collections, both available early next year. The collaboration is currently being sold on Stella McCartney’s e-commerce site and in select stores.

It’s not the first collaboration Stella McCartney has orchestrated with young consumers in mind. In August 2019, it announced a collection of ready-to-wear and accessories created with Taylor Swift that was pegged to the artist’s “Lover” album release. In October 2021, the brand introduced a sustainable, gender-neutral collection featuring prints by three young designers.  A collection with Disney’s “Fantasia” followed in April 2022. And that’s not to mention the brand’s long-term activewear collection with Adidas, allowing aspirational shoppers to wear its logo for a lower price.

“In my collaborations, I am always inspired by individuals with a passion for change and the fearlessness to go their own way,” McCartney said. “This shared kinship of boldly forging ahead is what I look for in a collaborator, and I have had the privilege to have found it with so many inspiring thought leaders.”