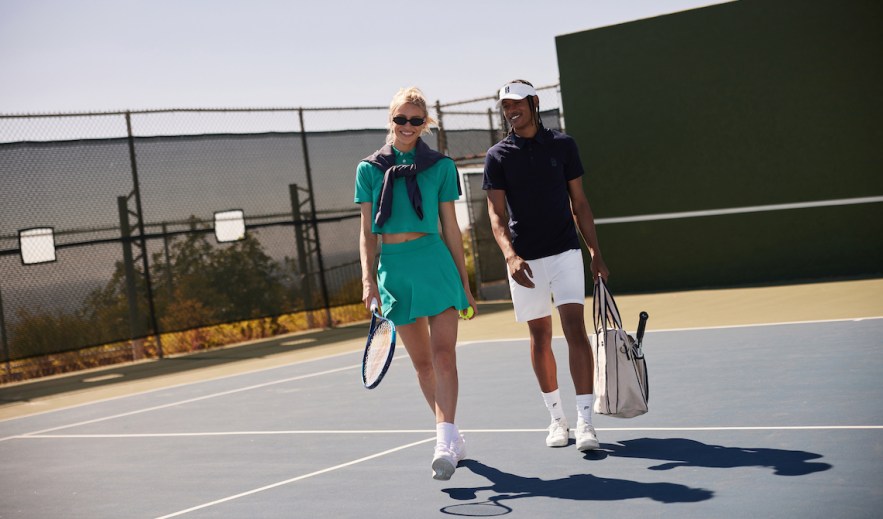 Fabletics is the latest fashion brand to embrace tennis

Either through short-term collaborations or permanent lines, Louis Vuitton and Lululemon are just a couple of the brands that have recently gotten in on the sport. The latest brand to jump on board is Fabletics. The activewear brand launched its first official tennis collection on May 12, a co-branded line of apparel with the tennis company Universal Tennis, which runs the UTR Pro Tennis Tour. Both brands will market the line through their various marketing channels including in-store events. Fabletics will be the official outfitter and sponsor of the UTR Pro Tennis Tour.

Ryan Heller, chief marketing officer of Fabletics, said one area the brand is exploring is sponsorships with athletes, though it has not named any specific athletes as ambassadors yet. “The high-performance brands [like Nike or Adidas] have snatched up the big names, but tennis still has a lot of white space,” he said.

The Fabletics line includes skirts, shorts, sweatpants, polo shirts, T-shirts, sweaters and a visor, ranging from $18-$60. This price point puts it slightly below similar tennis offerings from Nike. Styles from Nike capsule collections with tennis stars like Naomi Osaka and Rafael Nadal sell for as much as $100.

Tennis is just the latest in Fabletics’ focus on new categories after launching lounge in December 2021 and swim in March 2022. Fabletics wants to expand into any category where it sees the potential for growth.

“We listen to our consumers and pay attention to what’s happening in the world,” said Heller. “All the category expansions you see from us are because people have asked for it. Some have developed over a year or so, and some have been quicker. Tennis took probably about a year-and-a-half from beginning to end [to launch].”

Heller said category expansions, particularly in athletics-adjacent areas, are likely to come in the future as part of the brand’s future growth strategy.

Tennis has garnered a lot of attention, thanks to a spike of interest during the pandemic. In 2020, the sport grew in popularity more than 22%, and it grew by 27% in 2021. In April, fashion brand Sporty & Rich dropped a tennis-inspired collection, Lululemon launched a tennis category in late March, and Louis Vuitton previewed a tennis collection called “Match” in April that includes a bag with a tennis ball as a zipper pull. On Monday, Michael Kors dropped a collaboration with Italian sportswear brand Ellesse featuring tennis apparel and a tennis-themed campaign featuring Emily Ratajkowski.

New brands devoted to tennis apparel have launched in the last year like Furi Sport last July and Jgame in late April. Existing tennis giants like Lacoste have seen growth, due to the renewed interest in the sport. Lacoste’s parent company, Maus Freres, made more than $5 billion in the first year of the pandemic, up from $3.4 billion pre-pandemic, more than half of which came from Lacoste.

“The pandemic has been kind to tennis,” said Robert Aldrich, Lacoste’s North American CEO, speaking to Glossy in March. “It’s been one of the beneficiaries of the pandemic. It’s a socially distant sport, you can do it and still be safe.”

In fact, 21 million Americans began playing tennis for the first time in 2020. Since then, tennis stars have become bigger celebrities. For example, Naomi Osaka became an in-game fixture in Fortnite, joining the likes of Lebron James, and has struck major fashion deals with Louis Vuitton, Nike and Comme des Garçons. And tennis-influenced styles are noticeable even outside of tennis-specific collections, like UpWest’s athletic tank dress.