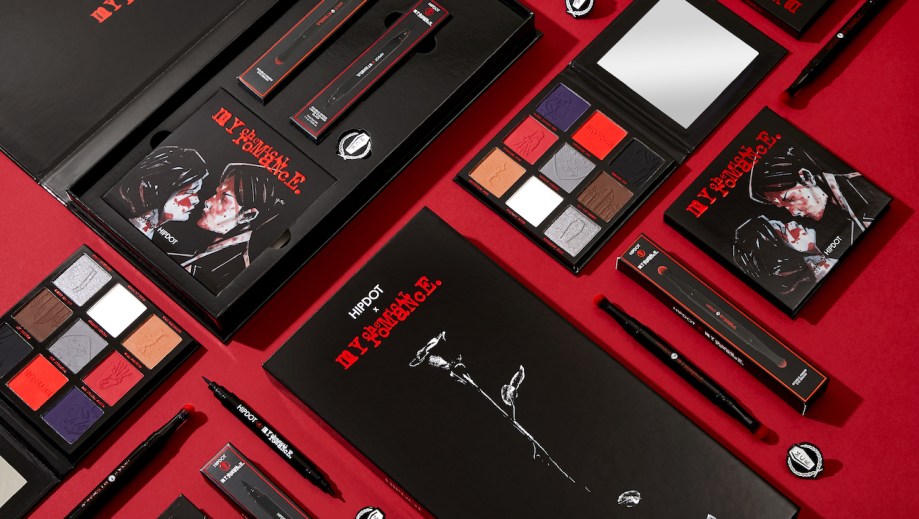 In the last three years, beauty brand incubators have had a fascinating run.

Behind-the-scenes companies like Maesa and Luxury Brand Partners have spurred much of the excitement in the beauty and personal care industries as of late, and they’re taking market share as a result. Think of Patrick Starrr’s One/Size, developed by LBP, and newcomer SOS Beauty’s Shani Darden Skincare. Conglomerates have now adapted this model and set up their own versions in-house, and more incubators are debuting with their own special take. For instance, Maesa considers itself a modern CPG company, while Luxury Brand Partners wants to be the de facto seller of beauty brands to strategics. Of the lot, HipDot’s approach is likely the most irreverent.

HipDot co-founders Jeff Sellinger and Mo Winter only began selling beauty products online in March 2019 (they duo worked together at Disney and Shopkick, a shopping rewards app). Their target: millennials. And their offering started with HipDot branded eye palettes that were clean, vegan and cruelty-free.

Last week, HipDot launched its My Chemical Romance collection, in collaboration with the rock band, on its own DTC site. It will land at Ulta.com and HotTopic.com by the end of the week. Though the mid-aughts punk group hasn’t released an album since 2010, when the My Chemical Romance brand was announced on HipDot’s Instagram, emo comments flooded a December 9 post.“Will actually die if I’m not able to purchase this,” read one comment. Another with a black heart and prayer-hands emojis read, “Prays there’s enough in stock for all trying to buy.” HipDot only has 166,000 followers on Instagram, but the video views in the first detailed MCR post were well over 178,000. Another video post that featured an “Emo Challenge” for fans to show off their beauty and fashion transformations saw more than 121,000 views. The collection sold out in three minutes, according to HipDot.

“Our minds work a little bit differently than what other people are thinking. For us, the new rule is that there are no rules,” said Sellinger of the the company’s brand ideas.

My Chemical Romance may not be TikTok “it” girls, but they do have a deep, rabid community — Sellinger said that ultimately matters more, as beauty launches have to elicit an emotional reaction today.

“It’s not like we did a bunch of surveys and said, ‘This is what people are talking about,’ to decide what to launch,” he said. “We’re not trying to follow here.” He added that, despite the strong TikTok buzz around the punk rock band (the hashtag #mychemicalromance has 363 million posts on the platform), those comments had little to with the actual product launch; it had been in the works for more than a year.

Sellinger said that HipDot has seen a 300% increase in revenue this year; it received a $2.5 million seed funding round from Foundation Capital, Founders Fund and Ludlow Capital in 2019.

You could be forgiven for not knowing who or what HipDot was, out of the gate. You’re likely more familiar with the company’s sell-out SpongeBob Squarepants collection. The collection launched last summer, timed to the 20th anniversary of the “SpongeBob Squarepants” show. The My Chemical Romance beauty brand is one of the many out-of-the box followups since. The company is also responsible for a Tapatío-themed beauty lineup, that debuted in October (it has since sold out), as well as pop singer Kesha’s brand Kesha Rose Beauty that came out in December 2019. HipDot has two under wraps culty brand launches set for spring 2021; it will also add product extensions to the HipDot brand, Kesha Rose Beauty and Spongebob Squarepants next year.

Geovanna Waters, HipDot svp of sales and operations, said the My Chemical Romance collection was initially timed to the band’s tour in September that sold out in six hours. “It was supposed to honor the band and [that angsty spirit] it stood for. Obviously, with Covid, the band and we decided that we still wanted to do something cool for the fans,” said Waters. Hero products are eyeliner, which the group is known for wearing, as well as a bold eye palette. All items are stamped with MCR’s identifiable imagery.

In the case of the SpongeBob Squarepants collection, Sellinger said he had a long relationship with Viacom and thought the character’s bold colors would lend itself well to a makeup collection. HipDot sold the line on Ulta.com, Rileyrose.com and its own DTC site. A year and a half later, Sellinger said that Spongebob is talked about every four seconds on social media, based on HipDot’s findings. With its latest installment of the SpongeBob offering that launched in October 2020, HipDot sold additional highlighter and eyeshadows palettes exclusively on Ulta.com.

Ulta.com has been a key partner of HipDot since the first Spongebob Squarepants collection, but Waters said HipDot explores different retail partners per brand. For example, HotTopic.com was a sought after channel for My Chemical Romance. HipDot is exploring going into more stores with its product next year, with Ulta’s shop-in-shops in Target as a hopeful objective.

“The conversations I’ve started having with the retailers is around if there’s a white space and how I can fill it for [them]. HipDot is obviously DTC and we have a customer base there, but there are so many more customers that Ulta can bring us. I think a store partnership is all about allowing us to expand our customer base and our brand awareness,” said Waters

While nostalgic and character-inspired beauty launches have offered excitement to the suffering makeup category this year, HipDot’s founders said the company is not based on gimmicks — but rather die-hard communities.

“A lot of the time, beauty brand launches that are supposed to feel like an influencer or a celebrity don’t feel like the real person at all. That’s not really fair to the fans. We try to give them exactly what they want,” added Waters.

Sellinger continued, “There’s a lot of saturation and competition in color cosmetics, and Covid is still [impacting] supply chain and manufacturing. Our ideas are out there, and it’s about being extra, so we’re not going to put something out that’s not good enough. We aren’t going to cheat ourselves.” — Priya Rao, executive editor

Deal to Know About: Hydrafacial’s SPAC

Ahead, Clint Carnell, HydraFacial CEO, explains what made him decide on a SPAC versus an IPO, what the new capital will be used for and why expanded distribution is on the company’s radar.

Why did you decide to partner with Vesper Healthcare to go public?
“I was taking the company toward the traditional IPO and had built up the talent on the team to do so, and I thought it would be an incredible public company. Brent had come to us when he was at Allergan, and back then, it didn’t work out. This time when he approached us, it gave us a faster route to go public and more access to capital. It couldn’t have lined up better. Everyone has a SPAC right now, and in my personal view, it’s a good vehicle. If you have the right sponsor, if they understand what they’re acquiring and those interests are aligned, then it’s good business. I think of Hydrafacial as the first beauty health company, and Brent understood that. He wants to super charge us.”

Tell me what you mean by the phrase “beauty health”?
“Hydrafacial serves as a foundation for whatever else you’re doing in other categories, whether you want Botox or laser filler treatments, or you are buying products at retail. We are a bridge between what is happening at Sephora and in plastic surgeons’ offices, so we don’t see ourselves as having any direct competition. We offer treatments and sell products, but it’s not like you are choosing a Hydrafacial versus doing Botox. It doesn’t work like that.”

You were private equity-backed; why is the injection of capital so useful now?
“International expansion is clearly one of our key strategic initiatives. We are early days in Shanghai and Tokyo, and we haven’t touched the rest of Japan or China. We’re early days in France, Italy and Spain, but not [yet] in South Korea or Brazil. We want to have additional touchpoints for the consumer and for providers. We’re also working on ‘Project Casa,’ a home device that will tie the consumer in their home to their professional in that market. It’s more of an always-on, one-to-one relationship to their aesthetician, because in our mind, the aesthetician is the influencer in these women’s lives.

We’re also looking at macro trends and innovation that we have to ensure that we’re not just leading, but participating in what’s going on. Clean beauty is one of our initiatives, we have a CBD product coming out, and we’re looking toward sustainable packaging for our products. We know millennials and Gen Z don’t want to purchase from any company, but they want to purchase from a brand they have a relationship with. So we’re trying to use our technology and our amazing treatments to develop a closer relationship — that is very important to us.” –Priya Rao

Beauty brands ramped up their DTC capabilities this year.

Strategic buyers are expected to return to M&A.

Recycled plastic won’t save the environment.

The latest subscription box is solely focused on moms.