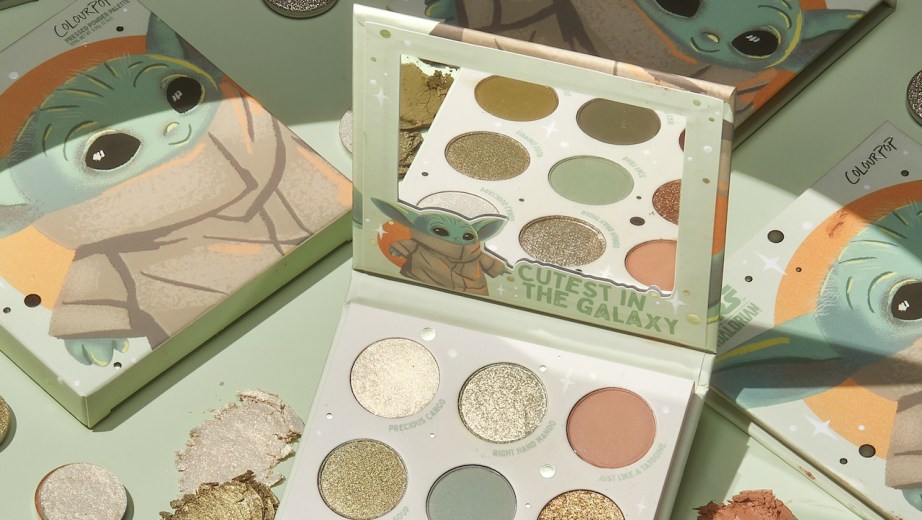 He’s tiny, he’s green, he can move things with his mind — and he is driving a buying frenzy for beauty and fashion brands.

As holiday retail remains lackluster this year, Baby Yoda — who is not actually called Baby Yoda, but rather The Child from the Disney+ “Star Wars” series “The Mandalorian”– is popping up in product collabs across beauty and fashion that quickly sell out. Fans are rejoicing this year; Disney was said to have missed out on $2.7 million by not releasing Baby Yoda merch when “The Mandalorian” debuted in 2019. The adorable creature is providing a sales boost to consumer brands as they seek out ways to drive emotional connections with consumers through their favorite characters, movies or shows.

ColourPop, for example, will be relaunching its The Child eyeshadow palette for Black Friday, after selling out of its first drop on its October 29 launch date. With the hype level of a coveted streetwear collab, commenters on Twitter stated that they were waiting upward of 30 minutes to purchase the palette online. ColourPop declined to share how many palettes it originally sold or will be selling.

Baby Yoda is appearing on a range of other fashion and beauty products this holiday season, including Adidas sneakers, a Pandora jewelry charm and lip balm, among others.

Paul Southern, the svp for licensing and franchise at Lucasfilm described The Child as an “instant pop culture sensation,” via email, stating the company is offering “something for everyone” with licensing deals in a variety of different sectors ranging from mass to luxury.

Adidas dropped its Mandalorian sneaker collection online on November 4 and is also sold out of its Baby Yoda sneaker, named the Superstar The Child Shoes. The $90 sneakers were made available exclusively to the brand’s Creators Club loyalty members and have been sold for up to $178 on StockX since selling out. Other shoes in The Mandalorian collection, meanwhile, are still available for sale on Adidas’ site. The character has been popular with the hypebeast crowd — BAPE released a capsule collection of Baby Yoda T-shirts in February. Sold for $115, the shirts are valued at around $200 on StockX today. A rare Baby Yoda T-shirt by Chinatown Market, meanwhile, is listed for $500 on Grailed.

Baby Yoda is also a hit with jewelry items. He appears on a $55 silver charm, as part of Pandora’s “Star Wars”-themed jewelry collection. Meanwhile, an extremely limited-edition set of 100 “Baby of the Force” necklaces by The Dan Life released on April 24 sold out — they retailed for $450 each. Two out of the three “The Child” necklaces by Star Wars Fine Jewelry — a new brand launched this month — are also sold out, including a $399 white diamond silver necklace and a $599 white diamond 10-karat gold necklace.

“Everyone loves The Child,” said Alex Fogelson, the co-founder and CEO of Taste Beauty, which launched a Baby Yoda lip balm in October. “It’s certainly having a pop culture moment.” Targeted toward tween and teen customers, the brand produces a wide range of products with Disney. It “certainly accelerates the marketing and the awareness, and we are able to tap into these pop culture moments that we see in the marketplace and in media,” he said.