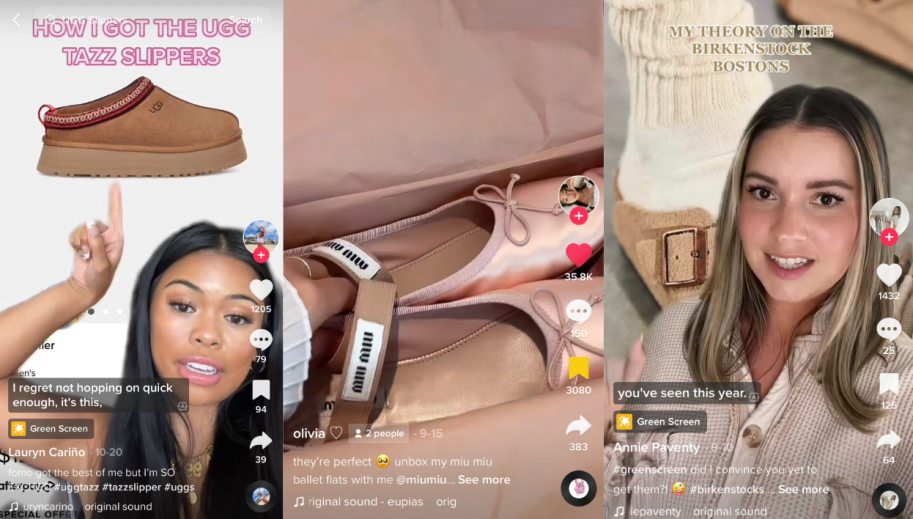 Unlike 2020, and to a certain extent 2021, 2022 has been a year of, well, wearing shoes. In 2020, new boots sat, soles unscuffed, as people’s lives changed overnight and staying home for months at a time became standard. But this year, with more people commuting and traveling, shoe trends came back.

Below, we’re looking back on the shoes that made their mark on the year and unpacking their popularity. Many are impossible to get your hands on, given their current cult status.

According to reporting by The New York Times, the Birkenstock Boston saw double-digit sales growth this year. While some find the shoes to be ugly, many considered them the most desirable shoes of the year. Global fashion shopping app Lyst dubbed it the shoe of 2022 on its “Year in Fashion” report, which analyzes shopping behavior and searches of over 200 million customers across Lyst and Google, plus product sales, views and social media coverage. This was thanks, in part, to “it” girls like Kendall Jenner and Emma Chamberlain embracing the style. Bostons were so popular, those who had them were able to sell them for double their retail price via resale platforms including Poshmark. On TikTok, the hashtag #birkenstockboston has 98 million views. Many of the videos show off happy customers unboxing their Bostons or recording “get ready with me” videos showing how they style their Bostons. The most desirable shade is the taupe suede, which is currently sold out in all but one women’s size on Birkenstock’s site.

TikToker Annie Paventy (@anniepaventy; 243,000 followers) made a venn diagram, in September, explaining her theory as to why they’re so popular. In short, she said it’s due to the fact that they’re versatile, comfortable and viral on Pinterest. As Beth Goldstein, footwear and fashion accessories analyst at NPD put it, “Even amid the dress shoe popularity this year, clearly, casual comfort still rules.”

Gigi Hadid and her loyalty to this Ugg slipper with a chunky platform have undoubtedly contributed to its popularity. “This is an update to iconic Ugg items, tapping into both the comfy/cozy demand and the chunky/platform trend,” Goldstein said, adding that it’s also seen a spike in popularity thanks to social media. The Tazz in the popular Chestnut color is currently sold out on Ugg’s site. The hashtag #uggtazz has 14.5 million views on TikTok, where you’ll find videos of creators reporting on where they were able to find it. TikToker Lauryn Cariño (31,000 followers), for example, paid $80 over the retail price to get her hands on the Ugg Tazz, via StockX. According to StockX, the Tazz was one of its best sellers over Cyber Weekend.

Adidas Sambas are another example of a shoe that is in no way new, and yet, you’d be hard-pressed to successfully find a pair in your size. Like both Birkenstock Bostons and the Ugg Tazz, Sambas ranked high on Lyst’s annual report. On TikTok, the hashtag #adidassamba has 60.9 million views. Of the classic sneaker’s current moment, Goldstein said it “demonstrates that younger consumers continue to gravitate toward heritage products, even if they didn’t experience their original popularity firsthand.” That indirect nostalgia is a theme that comes up often in Glossy Pop stories, particularly those focused on Gen Z behavior.

The fact that style icons including Bella Hadid, Kendall Jenner and Dakota Johnson have embraced the shoe, which originated in 1949, has also given it a lift.

Nike Dunks, particularly the black and white ones nicknamed “Pandas,” were ubiquitous in 2022. TikTok sneaker account @soleretriever made a series of videos in which it simply counted how many people wearing Pandas it spotted while walking around NYC — one such post can be seen here, with the count totaling 15. Dunks are popular in other colors, too. Like the Samba, they’re not a new style — they date back to the ’80s. It seems retro sneakers have some of fashion’s most impressive longevity.

After years of Chelsea boots and other ankle styles dominating the fashion conversation, knee-high boots and over-the-knee styles are booming. For example, just two weeks ago Larroudé and Jennifer Fisher launched a collaboration, centered on a $635 pair of super-high leather boots with a 3.8 inch heel, available in four colors. Nearly every pair is already sold out. According to Goldstein, “in the last 5 months, knee-high sales are up 20%, versus the prior year, while ankle boot sales are down slightly,” demonstrating a shift. That said, fashion’s current move away from skinny jeans does not lend itself well to high boots, which are hard to wear with baggier jeans.

Ballet flats were one of TikTok’s greatest fashion obsessions in 2022, gaining popularity in tandem with the larger #balletcore trend, which has 202 million views on TikTok. For those who could afford them, Miu Miu’s nearly $1,000 version was the pair to get. Goldstein noted that “the Miu Miu [shoe] brought buzz to the category,” which will likely “continue to see growth in 2023.”

Is the secret to youthful skin a roll of $8 tape?