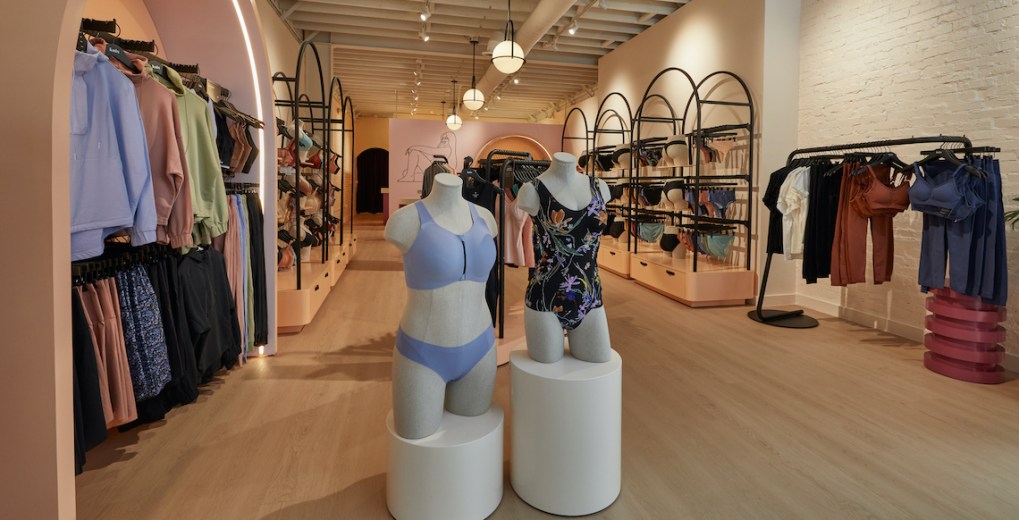 Canadian underwear brand Knix is making its foray into U.S. retail, with three stores set to open this fall.

CEO Joanna Griffiths said the brand was close to signing a lease on its first U.S. store in February 2020, but decided to hold off a few months — a move the team was thankful it made when the pandemic broke out in the U.S. a month later. But success at the company’s two Canadian stores in Toronto and Vancouver, which saw sales exceeding pre-pandemic levels and brought in $50 million in revenue last year, led Griffiths to pick up her U.S. retail ambitions. In May, the company raised $40 million in funding, saying at the time that it would use the money to expand its North American retail fleet.

“The Santa Monica store is a community store, on a main street in the middle of a neighborhood,” Griffiths said. “In San Diego, the store is part of an outdoor mall, testing the outdoor footprint in a high traffic shopping mall to see how that works for discovery. The San Francisco store is in a smaller shopping center, so it’s a bit of a hybrid of the other two.”

The format for each store also differs. For example, the Santa Monica store is 2,500 square feet, with an additional 2,500 square feet of outdoor space for community events. The San Diego store is 3,000 square feet and puts more emphasis on experiential components. Art from Los Angeles artist D’Ara Nazaryan is on display in the store.

The idea is that by testing out different store environments, Knix can gain intel on how to best proceed with its U.S. expansion. The variety of the first three stores also reflects an ongoing uncertainty in the retail market about what stores will survive. Major shopping malls like American Dream have suffered, while outdoor space was highly desired in the early throes of the pandemic.

“When we first started looking at stores, there was chatter about great deals and getting them for cheap,” Griffiths said. “What we discovered is that, in central locations where foot traffic is high, the rents are basically what they used to be. Landlords are still very protective of the destination they’ve built, and they’d rather let a place sit empty for a few months for a higher lease than rent it cheaper.”

Those high-traffic mall areas, especially in tourist-heavy areas like New York City and Los Angeles, suffered the most during the pandemic. A lack of tourist foot traffic and revenue made them less appealing than more reliable, local-focused stores in the last year, said Marshal Cohen, NPD chief retail industry advisor.

“Tourists play a huge role in retail for cities and areas that thrive on them,” said Cohenr. “Some stores went from being A stores [highest volume] to C stores [lowest volume] during the pandemic and even now in the recovery period.”

However, Griffiths did say there’s been some leniency from California landlords in terms of lease lengths. She declined to disclose the rates.

While Griffiths said Knix may branch out into other geographic areas of the U.S. soon, the focus will remain solely on California, based on e-commerce data showing that Knix already has an audience there.

“We have 15 key markets in the U.S. that we want to hit with retail eventually,” Griffiths said. “But, we wanted to go with a geography cluster first, so we could set up a team and service those stores effectively.”