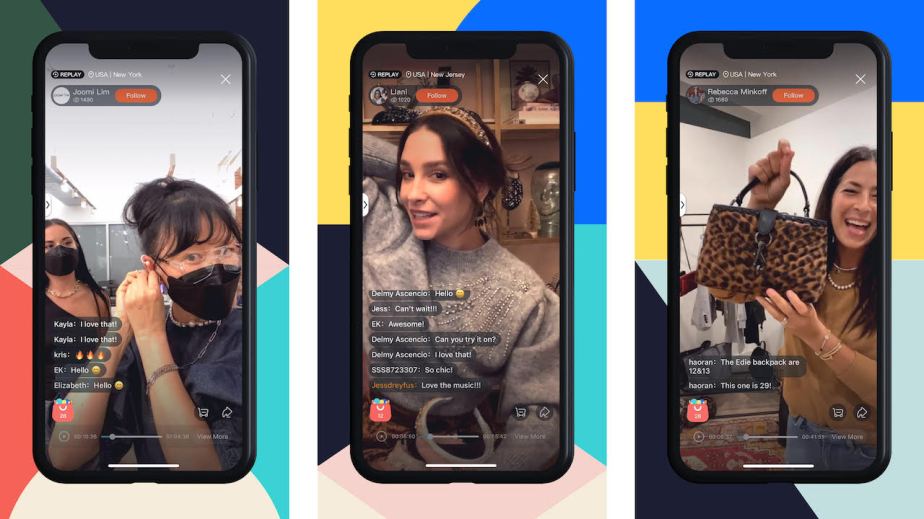 In today’s Fashion Briefing, fashion founders break down their 2021 strategies for emerging and age-old sales channels.

To launch in the U.S. market with a bang, livestream shopping app ShopShops teamed with Rebecca Minkoff, who’s used the app to reach Chinese consumers since 2018.

“Like anything new, it takes a minute to get it rolling, and then explodes,” said Minkoff. “We always like to be first movers, knowing that something like this is going to take a minute to build.”

To kick off ShopShops in the states, the platform hosted a holiday shopping event over four Saturdays, starting on Thanksgiving weekend. Each featured female founders of brands including Cynthia Rowley and Wander Beauty, in addition to Minkoff. Minkoff’s dedicated event was the most watched, attracting more viewers than an average livestream in China, said Wu. It saw repeat viewers and repeat shoppers, and had an average watch time of 10 minutes. The average watch time for ShopShops livestreams in China is eight minutes, said Wu, noting that there are 700-800 per month.

Judging from Chinese shoppers’ adoption of livestreaming, Wu said its “real” spike in the states won’t be until 2022. Livestreaming in China first began to catch on through Alibaba’s Taobao platform — it launched a QVC-style show “Taobao Live” in 2016, which Wu compared to “Amazon Live,” that started in February 2019. Despite the TikTok-inspired U.S. launch, Wu said most livestream shoppers across markets are millennials, with millennial moms being a primary target.

Livestreaming is now a habit in China, with local shoppers expanding their use beyond exploring new products to now, shopping familiar brands. And, in addition to apparel (50% of sales), they’re now using it to shop for beauty products (25%) and fashion accessories (25%), too, said Wu.

The livestreaming market in China doubled in 2020, driving an estimated $125 billion in sales, according to Coresight Research. For its part, 5-year-old ShopShops saw 20-30% growth, doubling sales in January and February and seeing a resurgence in the fourth quarter. Throughout the year, luxury brands hosted events on ShopShops resulting in sales in the five and six digits, and some boutique designer brands drove up to $10,000 per week, said Wu.

Rebecca Minkoff said the sales resulting from livestreaming in the brand’s New York and Los Angeles stores in 2020 surpassed the projected in-store sales for the year. With each livestream the brand hosts, traffic to its e-commerce site doubles.

But, American brands’ lack of familiarity with the concept is holding it back with local consumers. Even Rebecca Minkoff mentioned “tapping out” during the two-hour tutorial that’s part of on-boarding with ShopShops. Wu said, along with updating all featured copy to be in English, the functionality of the U.S. version of ShopShops had to be simplified for the local market — for example, it facilitates fewer “gamification rewards” for shoppers. A different payment process and unique merchandising tools were also incorporated.

Early feedback from U.S. clients has highlighted hesitancy of shoppers to buy via the ShopShops platform. For example, brands with physical retail have reported shoppers coming in with screenshots from livestreams asking to see the featured item firsthand.

Even so, Wu said the company is seeing its user growth in the U.S. double every week. In the first half of 2021, its goal is to secure and activate 100 retail vendors.

For brands, success on the platform depends on them establishing familiarity among shoppers via regularly scheduled livestreams featuring a consistent and relatable host. ShopShops helps by employing a roster of hosts who inevitably become influencers — in the U.S., it’s hired 10 hosts in New York and is actively recruiting three for the West Coast market, said Wu. To gain the attention of their customers, founders often host their brands’ first livestreams.

When Minkoff launched with ShopShops, she announced the first livestreams on Instagram, Facebook and Twitter, and featured a podcast about it “so that people could begin to understand the live shopping experience,” she said. She then hosted livestreams at 6 p.m. on four consecutive Saturdays, which were also streamed on Instagram for maximum visibility. To make a purchase, viewers had to access the ShopShops app.

Though Instagram has since launched livestream shopping — which Minkoff uses, among other livestream platforms — Wu said she doesn’t see it as competition. “In China, there are multiple players in the market,” she said. “And with ShopShops, people aren’t scrolling to relax; they’re looking with the intent to shop and be entertained through shopping.” In addition, she said, ShopShops provides data that the social platforms don’t, including the followers and sales driven by a livestream.

It also provides more guidance. Wu said long livestreams are best, as they allow shoppers to pop in at their convenience. Chinese brands often host four-hour livestreams, while Minkoff’s are typically 45 minutes to an hour. Across brands, 20 products are showcased, on average, though one Chinese brand managed to feature 125 items in two hours. In addition, featuring livestream-exclusive products, offers and giveaways is key to securing regular viewers.

Minkoff said livestream viewers are engaged, typically asking “a ton of questions,” seeking details on fit or advice on styling, for example. “You’re never going to get on a PDP page,” she said.

Rebecca Minkoff plans to ramp up its investment in livestreaming, in both China and the U.S., in 2021.

“We’re extraordinarily bullish on it,” Minkoff said. “With the growth and explosion of people shopping on e-commerce, this is set to be the next boom. And we want to be wherever [our shopper] is.”

Physical retailers are evaluating and elevating their in-store offerings to ensure they can compete with the new online experience.

“We strive to offer a fresh perspective each time a client walks into our store and browses our website,” said Laure Heriard Dubreuil, founder and chief executive of luxury boutique The Webster. “The Webster was created to be a place where clients can dream.” The 11-year-old company, which opened its eighth store in 2020, reportedly had its most successful sales month in September and saw total sales growth last year of 10-20%.  As of July 2020, its online and in-store sales were “very close,” according to the company.

“We pride ourselves on knowing our clients can depend on us to surprise them each season by adding emerging designers and launching new verticals — like beauty, most recently,” said Heriard Dubreuil. “They look to us for inspiration through the way we merchandise — for example, with unexpected pairings of heritage brands like Chanel sitting next to new designers like Marine Serre.”

Rotating experiential components “that appeal to clients in the most sensorial way” are also crucial to bringing shoppers back, said Heriard Dubreuil. The Webster has hosted art installations and pop-ups, and recently started incorporating computer-generated imagery and AR elements in its stores. Its newly opened L.A. flagship features a digital art wall streaming commissioned works of artists. “I see the two worlds of physical installs and virtual reality colliding together on a more regular basis,” she said.

In addition, she noted the importance of developing “genuine relationships” with clients. She said that, in addition to being entertained, shoppers across channels want education about what they’re buying, including information on a brand’s sustainability efforts and values.

Revolve is thriving, even without Coachella.

Brand collaborations are set to hold strong in 2021.

Coco and Breezy on their trial-and-error approach to growing a fashion brand.