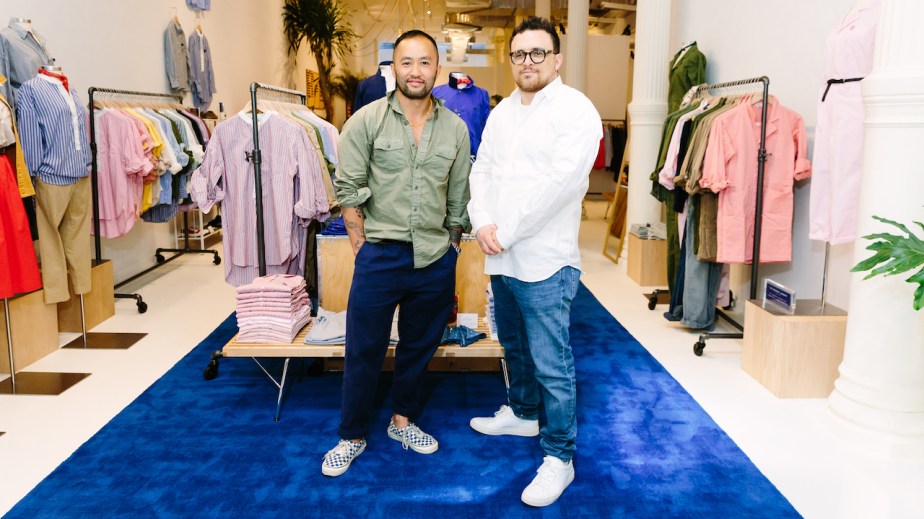 ‘Opening a huge gate’: After growth on e-commerce, Alex Mill sets its sights on physical retail

Four months after Alex Mill’s relaunch — which included a new website, new product categories and fresh creative direction from former J. Crew and Madewell design lead Somsack Sikhounmuong — the brand is getting serious about its growth and is looking to brick-and-mortar.

This week, the brand opens its first physical retail location, a pop-up in NYC’s SoHo neighborhood that will be open for six months. It’s promoting the store through Instagram and hoping to attract new customers through a series of events to be held at the store.

The brand started in 2012 as the brainchild of Alex Drexler. Drexler’s father, Mickey Drexler, is an investor and strategic partner in the brand. He’s also the former chairman and CEO of J. Crew. While Alex Mill was chugging along for seven years selling men’s shirts and tees, Alex felt it was time to go beyond the basics. At around the same time, his father introduced him to Sikhounmuong.

“We had a nice following in men’s tees and shirts, with limited selling through some men’s boutiques like Stag, Barneys and Mr. Porter. It was primarily a wholesale business,” Alex said. Partnering with major retailers like Barneys has been a key strategy for the brand to gain name recognition among shoppers.

In February 2019, the brand relaunched with Sikhounmuong at the creative helm. Sikhounmuong brought visions of an expanded product offering, including adding women’s clothing to the business, that didn’t stray too far from Alex Mill’s original mission: You don’t need more clothes, you just need the right clothes. Along with Sikhounmuong, Alex Mill brought in other J. Crew alumni, including marketing director Justin Shu and former head of PR Katie Reppert.

In the following months, Alex Mill has seen steady growth from its e-commerce business, across both men’s and women’s. The brand declined to share specific sales numbers. Three of the brand’s key pieces, including its women’s jumpsuit, women’s work jacket, and its men’s pleated chinos, have sold out online. The women’s jumpsuit, which retails for $178 and comes in three colors, sold out within two weeks. Alex Mill worked quickly to restock the jumpsuit since it was in such high demand, using a waitlist to gauge how high demand would be.

Among signs it was time to get into physical retail: Customers kept knocking on the door of the company’s corporate headquarters (a short walk from the new retail location), thinking it was a the brand’s store and wanting to shop. The office is simply a showroom, open to customers by appointment only.

“We always wanted to connect with the customer and have a space where they could come, visit and experience the brand, not just digitally. We sell to some stores right now, like Net-a-Porter and Goop, but we wanted a place where [customers] could see the full collection,” said Alex.

“Although e-commerce is really important, people still want a physical space to try stuff on, to feel stuff. A lot of what we do has to do with the wash and the color. You can’t always get that on the screen. I think you have to try it on. You have to feel it and see how it drapes,” said Sikhounmuong.

Inside the brand’s first retail location, shoppers can find all of its latest styles and also a handful of partner brands. For example, Sikhounmuong said Alex Mill doesn’t make women’s denim at this point, because other brands are already out there making denim for women really well. Rather than launch a new product category, the brand chose to stock denim from partner brand B Sides. The same applied to its shoes, from Marais and Bata Heritage, and its swimwear, from Birdwell. There’s also a small collection of vintage finds from Front General Store in Brooklyn, which the brand started out selling through Instagram to its nearly 20,000 followers.

At the end of the day, the Alex Mill team is hoping to use the new retail location (and any future locations, although the brand declined to share a roll-out plan) as a way to learn what customers like and don’t like, and what they want to see more of.

“To now have a store, it means the customer can walk in and we can help them style something or answer a question. Or our sales people can get feedback like: This is fitting well, or this is not. That’s opening a huge gate to give us a different level of customer service, which we’re really excited about,” said Sikhounmuong.