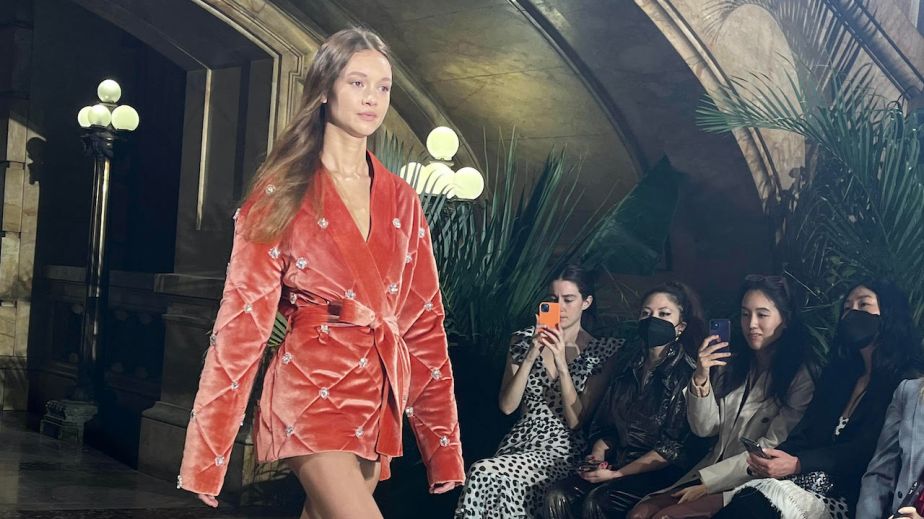 Across the shows, designers were eschewing stuffiness and formality, in favor of looser gatherings with a focus on joy and happiness. Several designers characterized their presentations as “celebrations” and an antidote to the somewhat depressing atmosphere of the last few fashion weeks, disrupted by the ongoing pandemic.

“The most important element for us was that we just wanted to party,” said Amy Smilovic, creative director of Tibi. On Monday, Tibi will host a combination of virtual film and in-person presentations. For Smilovic, joy was a key theme.

“It’s become so sad recently,” she said. “Not only do you not leave NYFW happier, you leave actually sadder. So I just wanted to make something happy. It’s a party where you feel immersed in the collection.”

Glen Proctor, one half the twin brother designer duo behind the accessories brand BruceGlen, shared a similar sentiment.

“One of the things we wanted to push was the idea that #fashionisfunagain,” Procter said. “That’s a hashtag we use a lot. The fashion industry can be very stuffy, very exclusive and not inclusive. We wanted to establish a brand that anyone could wear. There’s really a need for that right now.” 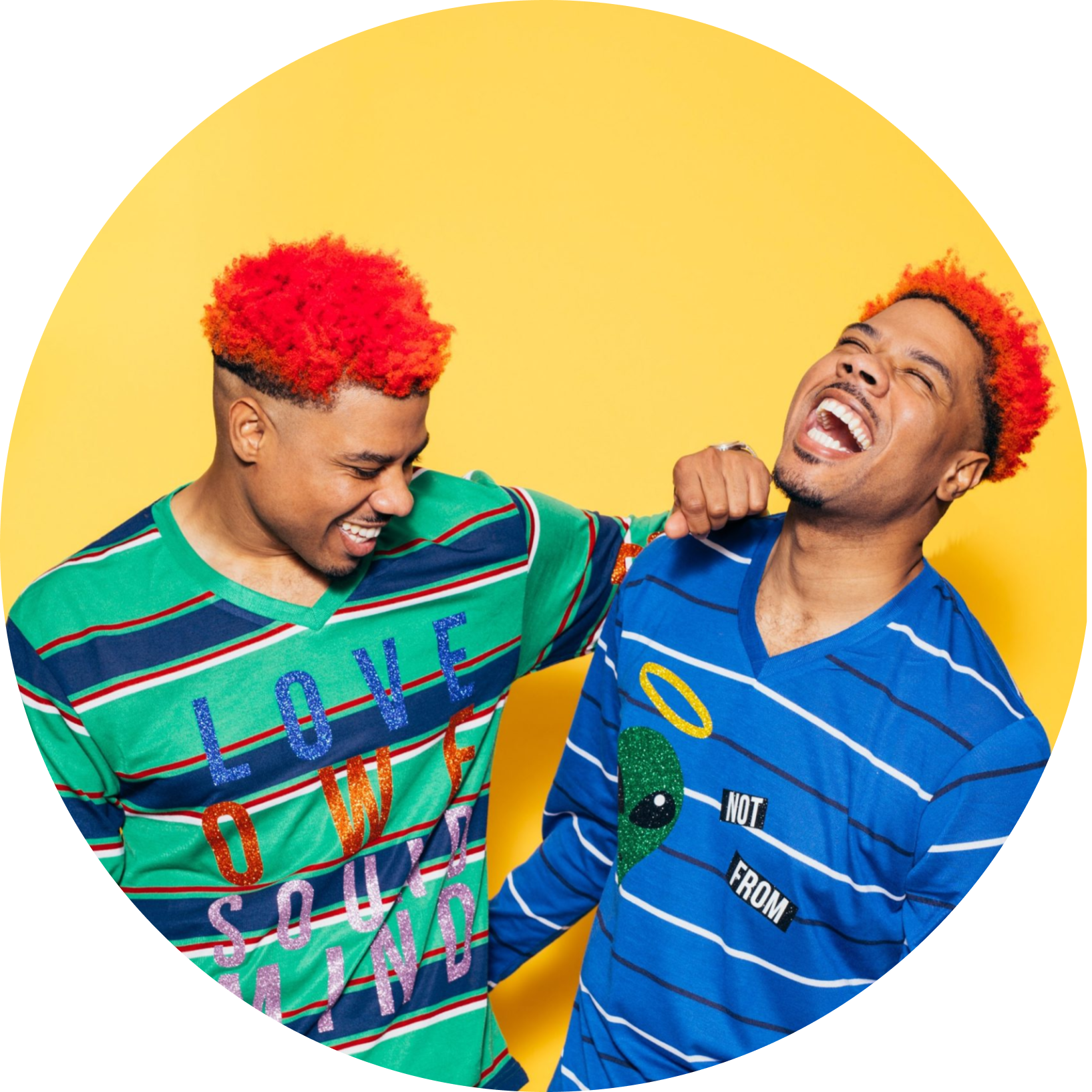 One of the things we wanted to push was the idea that #fashionisfunagain. The fashion industry can be very stuffy, very exclusive and not inclusive. We wanted to establish a brand that anyone could wear.
Glen Proctor, Co-CEO of BruceGlen

The idea that NYFW could alleviate the doldrums even extended outside of the runways. Athleisure brand Alo Yoga is the “official wellness partner” of NYFW: The Shows. The brand held an NYFW mental health “wellness sanctuary” during NYFW this morning, which will run through the weekend, offering guided meditation to NYFW attendees.

It’s Good to be Back

While this season’s NYFW saw a good number of cancelations, just like September’s, it also saw some brands coming back for their first in-person show in years.

Patricia Bonaldi, the Brazilian couture designer behind PatBo, spent a full year working on the collection she showed this afternoon. It’s only her second show ever, since she only started doing RTW in the U.S. five years ago. For her, being back in-person was an emotional moment.

“I made all these clothes in my hometown in Brazil,” she said. “I spent the last year of my life working on this, so getting to show it here in front of everyone is very special.”

Her show, held at the Surrogate Court on Chambers Street — where, a fellow audience member informed me, they film “Law & Order: SVU” — was packed. Influencers like Nicky Hilton and Olivia Palermo filled the front rows. It was a throwback feeling to the pre-pandemic days of NYFW. For Bonaldi, the designs were a throwback as well.

“Twenty years ago, I started with handmade gowns,” she said. “It wasn’t until I started selling in the U.S. that I started to do a lot of beachwear, resortwear. But my background is in couture. And this is what I love to do: to mix a little sexiness of beachwear and resort with couture. It feels good to be doing that again.”

Chelsea Hansford, creative director of Los Angeles lifestyle brand Simon Miller, said she finds in-person presentations, press days and shows are the best way for her to communicate what she wants to do with her collections.

“This is the first time we’re back in New York in two years to get back to the market,” Hansford said. “We love to show things in person. Meeting with the editors and influencers and press, and seeing them in person, it’s so much more impactful. Showing the world of the brand is really important. That’s what I’m excited about.”

Twin brother designers Bruce and Glen Proctor relaunched their brand, BruceGlen, with an accessories focus in 2019 and have swiftly established themselves as designers to watch. Their bags and accessories, which are sold in Saks Fifth Avenue and Bloomingdale’s, have earned them an Elevate grant from Stitch Fix and recognition from Vogue, Nylon and Cosmopolitan.

Prior to their very first NYFW show, on Tuesday, the brothers spoke with Glossy about what the show means to them and what paths new designers can take to grow.

Give me a quick history of the brand.

Bruce Proctor: We relaunched the brand in 2019, but we actually first started it way back in 2006.

Glen Proctor: It started as a ready-to-wear collection. We did a few seasons and sold at some boutiques, but ultimately, we just couldn’t sustain the brand. We went back to working full-time for other, mostly urban brands. We designed for Marc Ecko, Sean John and Nicki Minaj. We freelanced for a while, and then ultimately, we decided we missed having our own brand. We relaunched as an accessories brand with the Grenade bag. That was the launch product. That really took off. We showed our first collection in 2020, and it’s just been growing ever since.

How important is NYFW for new or up-and-coming designers?

Glen Proctor: For us, it is really special. We moved to New York 16 years ago, we loved fashion, and we’d go to NYFW back in the day.

Bruce Proctor: That’s how long ago this was: They were still doing it at Bryant Park.

Glen Proctor: We’d pick out our outfits and go stand outside the tent and try to meet people. And after a couple of seasons, it got to be a little discouraging. It felt so unattainable. How does it happen? How do you become a part of CFDA’s Fashion Week? It doesn’t happen. It was a dream we put away, because we thought we couldn’t have it.

Bruce Proctor: But this year, it all just came together, and here we are. So I think NYFW is very powerful, at least in the sense that you feel like you’ve made it.

What’s your theme for the show? What did you want to do with it?

Glen Proctor: We wanted to do something special. We lost our mother around eight years ago. And to put it lightly, we had some traumatic incidents happen to both of us in the last few months, and it’s just been a difficult time. We were thinking about our mother and the lessons and ideals she instilled in us, and it just felt right to do something honoring her. So the collection is inspired by her; it’s called Look Mom. And the whole show has some storytelling in it that’s inspired by her.

You were the recipients of a Stitch Fix grant a few weeks ago. What will you do with that grant money and opportunity?

Bruce Proctor: We’re super excited to be a part of this — [it involves] some amazing designers, lots of sustainable designers especially. To be on the Stitch Fix platform is huge already, in terms of exposure. The grant also comes with mentorship, though, and that’s been just as valuable as the money. [You get] so many great connections with other designers, with buyers and creatives.

Glen Proctor: The money will mostly go toward production. We are growing our wholesale a lot and, if you’ve done it, you know the retailers want big orders that cost a lot of money upfront. A lot of times, when you see young designers go down, it’s because they overextended themselves with big orders for retailers. So the money is allowing us to grow that side of the business.

What do you see as the best path for growth for rising designers today, in terms of DTC and retail?

Glen Proctor: Both department stores and DTC are super important. We started in 2019 as DTC-only, and we made great margins on our handbags, which we could keep at a good price. That’s the benefit of DTC. But honestly, being in Saks Fifth Avenue or Bloomingdale’s just brings us to a whole other audience. The downside is that, a lot of times, it can be a while before you get paid for a big wholesale order. DTC helps us pay the day-to-day costs, because we get a payout from Shopify every three days, while wholesale helps us with discovery and these big orders.

So both are important. DTC is good to get yourself established. Again, I think going too big too fast on wholesale orders can be really tough.

Tomorrow, NYFW mainstays including Dennis Basso and Altuzarra will show their collections, along with Eckhaus Latta and its “10 Years of Eckhaus Latta” show at Spring Studios. The Black in Fashion Council will host a Discovery Showroom with 10 exciting Black designers that will run through Wednesday.