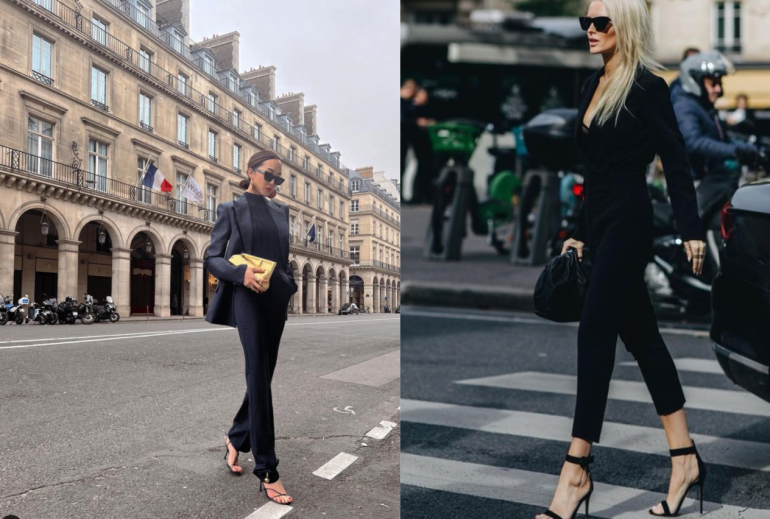 It’s strange to recall the early days of street style. Think: The Sartorialist, All The Pretty Birds, Tommy Ton. The sites were essentially blogs. Most of the influencers were, in fact, fashion editors themselves: Kate Davidson Hudson, Kate Lanphear, Giovanna Battaglia, Anna Dello Russo. A few influencers, as we know them today, were getting front-row seats — and ruffling feathers in the process. Think: BryanBoy, Leandra Medine…

Many of these sites pre-dated Instagram, which launched in 2010. For example, The Sartorialist launched in 2005, the same year Tommy Ton created Jak & Jill, his own blog.

Last season, as showgoers reconvened after lockdowns, the front rows were flooded with a new kind of influencer: the TikToker.

At its best, street style serves a purpose. It’s not just to drum up envy in the viewer, but it’s also to inspire. And, if the featured pieces are tagged or otherwise identifiable, it can spur significant sales. All of these factors have transformed the meaning of street style.

“Street style is more relevant now than ever before,” said Chriselle Lim, influencer and entrepreneur. Lim has been attending global fashion weeks for the last decade, give or take. “When I first started, there was street style happening. But it was focused on what the big editors and the big fashion houses were doing, versus on the people who were attending. But now, it’s quite the opposite. I think what’s happening now is that people are looking at the street kids and the showgoers, at what they’re wearing, and really figuring out how they can also adopt more of a street style look.”

According to Kate Davidson Hudson, who is now the editor-in-chief of LuisaViaRoma’s magazine, LVR, “The impact of social commerce cannot be underestimated.” She referenced a January 2022 Accenture report, which stated, “Social media shopping is projected to reach $1.2 trillion USD by 2025.” It’s currently valued at $492 million USD, “so it’s growing at a compounded rate of 26%, primarily to Gen-Z and millennial shoppers,” she said.

To seize that opportunity, LuisaViaRoma has introduced Visual Search Functionality, an enhanced search tool that allows shoppers to find pieces emulating their favorite looks, by uploading a photo. “It takes the friction out of searching for the street style looks we see in our social media feeds,” Davidson Hudson said. “It’s another way to tighten the loop between aspiration and access, which editorial street style content and social content are so great at cultivating.”

Street style’s appeal has always stemmed, at least in part, from being more accessible than the often out-of-reach, less wearable looks that go down the actual runway. And, according to both Lim and Davidson Hudson, its impact has been so great that street style often now inspires the runway, rather than the other way around. “In some cases, the street style influencers and photographers are now just as directive as the runways and the established publishing media houses.”

Lim also spoke to the shift that has occurred over the last decade. “[Ten years ago,] everyone was looking at what these big houses were creating, and we were taking trends and adapting those for the street.… But now, it’s quite the opposite. Fashion [fans] look at what people are wearing on the street.”

She cited the new Fendi sneakers as an example of a fashion house borrowing from street style. “That wouldn’t have happened 10 years ago,” she said.

It’s all part of the continued democratization of fashion. Where once, street style coverage was ruled by a select few aforementioned photographers, today, anyone with an iPhone can be a street style photographer. “These random people who have access to a camera … are quite talented. They can snap a photo of you and tag you on Instagram — this now happpens all the time — and the next season, I’m working with them as my in-house photographer, because I love their work.”

In The DMs with TikToker Audrey Peters

Today is the official first day of fashion week! Tell us what you’ve been up to.
Yes! I’ve been to a couple events. I went to Snapchat’s fashion week kickoff dinner and the Daily Front Row party last night. It felt amazing to be back at events. Today, I got my hair done in the morning, andI’ll be shooting content this afternoon then heading over to the Rodarte presentation!
Ooh! What have you been wearing? We know you’re a shoe girl — send us some pix!

Do you plan all your outfits in advance? And do you DIY it?
I plan some in advance, while others are totally spontaneous! Everything is DIY, unless it’s a very formal event.
What are you most excited for this fashion week?
I’m SO excited to be going to events again. The winter has been so cold and depresso, and it’s been so amazing seeing everyone in the industry. I mainly see all my friends who are content creators at functions, so it’s been so fun reconnecting with everyone — and, of course, capturing fire content.
Do you think the fashion industry is really embracing TikTok now? What’s it like being a TikToker at NYFW?
The new wave of content creators is slowly taking over, and they’re mostly coming from TikTok, without a doubt. Years ago, YouTubers were shamed and ridiculed for attending events like fashion week, then Instagrammers got the heat. Now, TikTokers are definitely getting criticism for our attendance. But I’m a believer that no attention is bad attention, so I’m living for it.
Haha, I love that! Any standout moments or people you’ve been excited to see, so far?
I got to meet Chriselle Lim, which was such an amazing moment for me. Years ago in high school, I started a fashion blog because I’ve always been obsessed with internet culture, and I got bullied for it. But I didn’t care, because women like her, Aimee Song and Chiara Ferragni were my inspirations. To meet one of the people who inspired me to start my current career was such a full-circle moment for me.

These are the fall 2022 top color trends from New York Fashion Week.

New York Fashion Week is all about emerging talent.