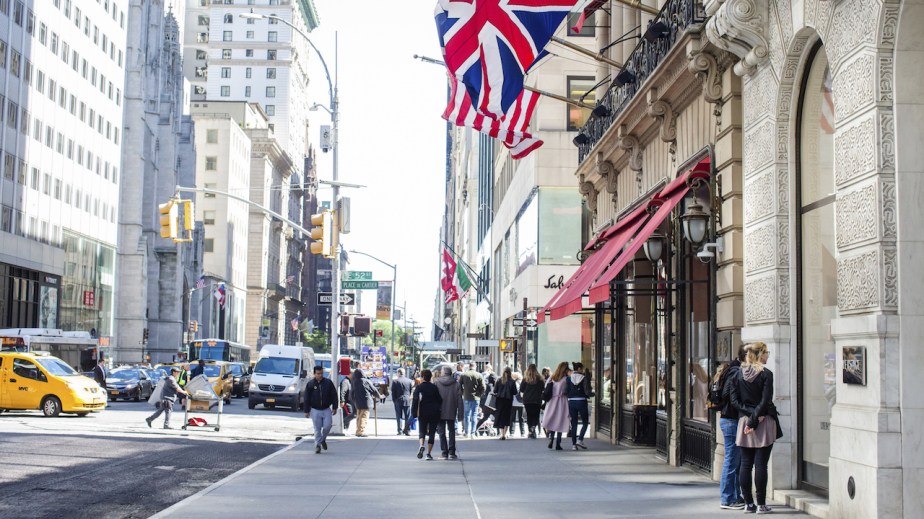 ‘No place will be more expensive’: Buoyed by big retail launches, Fifth Avenue looks to make a comeback

In the past year, the New York retail landscape has been through a lot — Fifth Avenue included.

There have been major retail closures from big brands, from the casual, like Gap, to the high-end, like Tommy Hilfiger and Massimo Dutti. Flagship stores in areas like Fifth Avenue and Madison Avenue have been closing left and right. But Jerome Barth, newly appointed president of the Fifth Avenue Association, pushed back on the idea that Fifth Avenue is facing any sort of retail pressure. It already boasts experiential retail, which is resonating with consumers — and he’s betting that more, unique experiences will keep shoppers coming back.

“I think Fifth Avenue is in a time of tremendous opportunity,” said Barth, who was named president in April. “But retail everywhere is changing. Entire brands are created without any physical presence. The investors here are putting a lot of money into refurbishing buildings for the next generation to occupy. More of the brands here are doing things around experiential retail — David Yurman is an example of a company that has an exciting new store coming soon — and I think that’s the best way to capture consumers today.”

Barth, who has worked in business development across the city, from the Times Square Alliance to the Bryant Park Corporation, pointed to Apple and Nike as two examples of the area’s retail ascendance. Apple closed its Fifth Avenue store, which was its most profitable in the world, in 2017, keeping it closed until just last month when it reopened with a new look. Similar renovations are underway at Rolex, Tiffany & Co. and the building once occupied by Gap (which is currently without a tenant).

Nike’s massive Fifth Avenue flagship store — six floors and 68,000 square feet — is the latest in a string of big athleisure brand launches on Fifth Avenue, starting with Adidas in 2016, Lululemon in 2017 and Puma this year. When Puma’s two-story, 18,000-square-foot store was first announced in August, CEO Bjoern Gulden called Fifth Avenue “a prime Manhattan location, that will allow us to connect with both our U.S. and international customers.”

All of these launches and reservations can be taken as retail’s acknowledgement that the modern upscale retail neighborhood has to offer something new and unique. Hudson Yards has put a focus on bringing in digitally native companies, while Chelsea’s Meatpacking District has used events to revitalize retail, but Fifth Avenue has yet to institute similar changes. According to PYMNTS, retail vacancy on Fifth Avenue jumped up from 17% to 25% between 2018 and 2019, and rent prices have fallen by 11% to compensate.

Barth said that his plans to keep retail on Fifth Avenue on track come down to two things: working directly with landlords, stakeholders and tenants to improve the public spaces of the area, and maintaining and cultivating Fifth Avenue’s reputation as a prestigious shopping hub.

But if Fifth Avenue, or New York retail in general, wants to ensure that it’s filling up empty spaces, landlords need to become more flexible with the kinds of stores and tenants they accept and the terms they offer them.

“Retail has become a very difficult landscape to navigate,” said Scott Stuart, CEO of Turnaround Management Association. “Brands are over-expanding, and leasing costs and rents have gone up. Retailers have started to think non-traditionally to get by. Landlords used to have the upper hand and could charge whatever they wanted, but now companies can sell online or go elsewhere, so the landlords don’t have that advantage. They still need to fill space and high rent prices aren’t sustainable.”

Barth pointed to the openings of stores like Nike and Puma in the traditionally luxury-focused neighborhood, and the focus on experiential retail that comes from Apple, Nike and Rolex as examples of how Fifth Avenue is staying modern. He said that landlords don’t necessarily need to lower prices, just be more accepting of outside-the-box thinking.

“If we’re successful at what I’m trying to do, then no place in the world will be more expensive than this,” Barth said, referring to the question of rent prices. “Fifth Avenue should be for brands who are leaders in the world, and they should create a halo effect that brings up everyone around them. In New York real estate, there will always be a conversation around rent prices. Rolex, Tiffany, Nike and Saks just spent a fortune on the renovation of their stores, and they’re doing a lot of cool things with personal shopping. I think it’s clear that the landlords are becoming understanding of how things are changing and more open to more modern stores.”