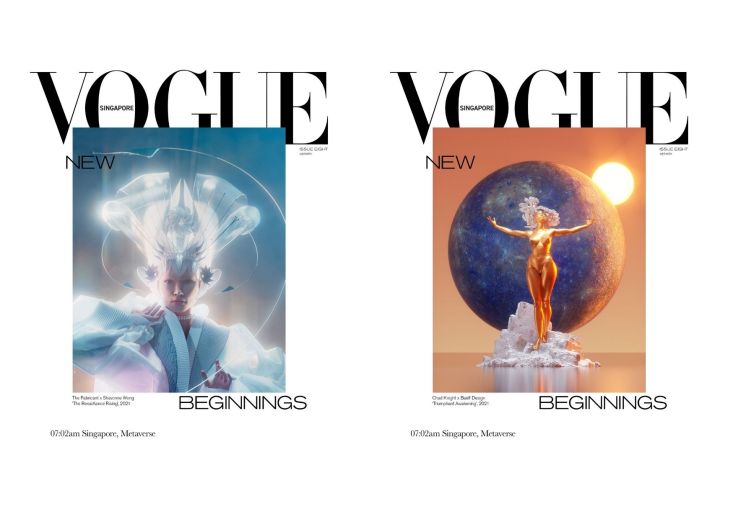 While print publishing and technology have been on opposing ends of media for a long time, some fashion magazines are now dabbling in NFTs as part of a longer-term strategy.

Within the fashion industry, NFT activity has largely been driven by brands. But some of the superbrands of the fashion industry lie in the media space, with titles like Vogue and Dazed attracting a loyal following equal to some luxury players. Vogue alone reported a global web audience of 56 million people in 2019. The media space also includes the work of notable photographers like Ellen von Unwerth, many of which have been working in fashion for over 30 years and have collections that offer an unfiltered look behind the scenes of the biggest fashion moments.

Titles like Vogue sit on a repository of images that can be turned into a valuable catalog through NFTs. However, to make sense, the NFTs have to engage the reader in a new way. While legacy titles like Vogue U.K. and Vogue U.S. may have difficulty engaging audiences within the NFT space, the ever-growing roster of Vogue international titles means there are some that are nimbler and more open to new formats. Norman Tan, editor-in-chief of Vogue Singapore, is very familiar with the space.

“[With NFTs,] we didn’t want to do what we always do with Vogue, which is: You do a photograph, look at the top photographer, the top model, throw on a beautiful dress and then shoot it — which is very analog — and then mint afterward,” he said.

Vogue Singapore is a young title, only launching during the pandemic with its “Arise” headline in September 2020. In three collectible covers, it featured Singaporean model Diya Prabhakar photographed by Bryan Huynh, with a CGI floral illustration by Rodolfo Hernandez; Chinese supermodel Jū Xiǎowén photographed by Gregory Harris; and Japanese actress Nana Komatsu photographed by Fish Zhang.  In both print and digital, the covers heavily integrated technology, including with QR codes and AR and VR content.

On November 10, Vogue Singapore’s latest issue launched a non-fungible token (NFT) drop of two digital-only Vogue covers on the crypto marketplace Opensea. The first was created by metaverse artist and Nike 3D designer Chad Knight, along with designer Jamela Law and Lionel Wong of Singapore-based design firm Baëlf Design. The animated cover created by the three designers was called “Triumphant Awakening.” NFT artists The Fabricant and Shavonne Wong created the second programmable cover, called “The Renaixance Rising.” The featured lighting on the page changes depending on the time of day. “That’s the beauty of digital fashion,” said Tan. “It doesn’t have to be realistic, and it doesn’t have to abide by the laws of physics. You could be anywhere in the universe or in your imagination.”

For Tan, the integration of digital is also a logical move. The population of Singapore only counts 5 million people, making it one of the smallest in the world and not a center of garment production. However, the population is still interested in luxury and technology. “It surprised me many years ago when I first visited this country that everyone carries a designer bag, whether that’s Chanel, Hermès, Prada or Gucci. It’s rare to find something that comes from an independent designer.” The auction for the NFT covers started at 12ETH each (approximately $38,000). Vogue Singapore also released eight other NFT’s. Vogue, the NFT artists, NFT marketplace Brytehall and cryptocurrency exchange Binance will share revenues from the NFT sales.

As the interest in the digital art space has ramped up and digital designers are creating garments for the industry, a new field is growing that opens up a new realm of creativity for the fashion media space. Vogue Singapore hopes to expand on that even beyond digital creators. “I don’t want the NFT issue just to be a flash-in-the-pan and we never come back to it,” said Tan. “With] what we’ve been doing in the last year, everyone knows that Vogue Singapore has a passion for this [NFT] space. For next year, we are going to be introducing a contributing metaverse editor. With every issue, we will invite an expert in the metaverse space — he or she could be a creator or a writer or collector. This person will act as a bridge with Vogue Singapore and educate the Vogue fashion reader about what is topical in this universe.”

The NFT covers currently on auction spotlight the interactive elements of collectible covers, which can be personalized in the future. Vogue International is already working on more NFT magazine covers for upcoming issues of Vogue Brazil and Vogue Arabia, showing that the media company’s appetite for digital is not slowing down.

Cathy Hackl, industry expert on the metaverse, said that for fashion brands, NFT’s offer a way to extend past the 2D world they produce. “They can become fashion houses, create their own worlds and engage their community in a completely new way,” she said. “NTFs give fashion media a new monetization opportunity and should be seen as a store of value that will increase the value of media companies. The IP they have been creating for a long time becomes an NFT-able asset that now doesn’t live in an archive but can actually generate value.”

Other publishers are also entering the space. ES Magazine, the weekly lifestyle and culture magazine from the Evening Standard, released its very first NFT magazine cover art (and the first NFT cover in the U.K.) in September. Thematically, it was designed to amplify BIPOC and non-binary voices across music, art and fashion, and highlight the face of LGBTQ+ poet and model Kai-Isaiah Jamal. It is currently available to view at the Annka Kultys Gallery until it is auctioned off; proceeds from the sale of the piece will support surplus food charity The Felix Project.