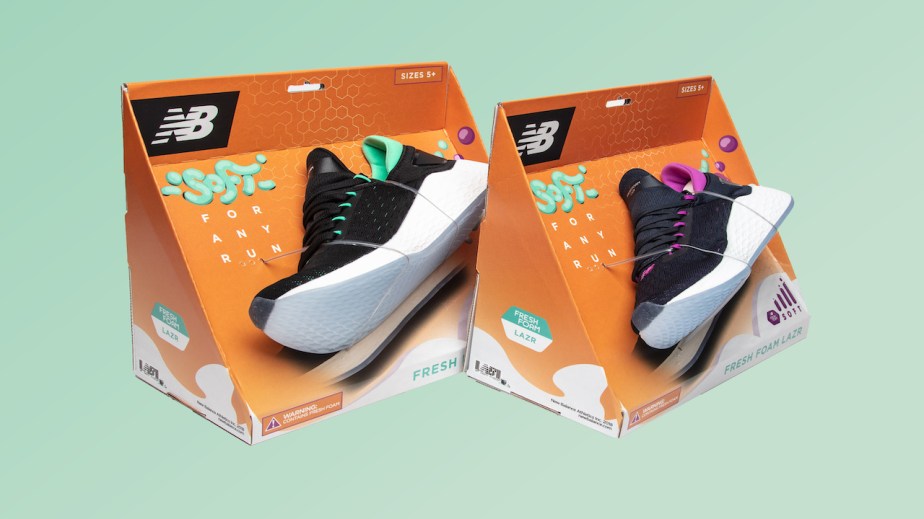 When New Balance launched in January the fourth iteration of its line of Fresh Foam shoes, the brand had two main targets: First, it wanted to reach a group New Balance refers to as “game changers,” which are high school and collegiate athletes who like to run but don’t count running as their main sport. Second, it wanted to expand its reach from “game changers” in the U.S. to those around the world.

In its quest to become a more global brand and connect with young athletes, New Balance decided to create gamified mobile ads, served programmatically through Snapchat and Instagram. That insight led New Balance to partner with ad platform TreSensa to create the in-app ad, disguised as a game called Cloud Jumper, to promote the shoes.

Using a third-party tool called Hookit, which measures the value of all the content the brand creates, New Balance found that positing illustrations and animations to social media always drew high levels of engagement (mainly likes and comments) for the brand, especially among its target demographic for the Fresh Foam line.

“When you begin to look at enough content over a long period of time, we are able to see the traits that pop most consistently on our most engaged content,” said Ian Fitzpatrick, head of digital marketing at New Balance. “Even outside of this game-changer consumer, when we look at someone who is more style-focused, animations and illustration styles drive a really high engagement for us.” Plus, because most younger consumers tend to be mobile- and digital-first, Fitzpatrick said it made sense to create something animated that would live on mobile.

In the game, players tried to move an animated, bouncing bunny character vertically up their screens, using purple clouds, pillows and New Balance-branded trampolines to propel it. TreSensa co-founder and CEO Rob Grossberg said the team was very conscious about the illustrations it used for this game, picking a character and items (like clouds) that would also educate consumers about key product attributes. On the New Balance website, the brand describes the Fresh Foam sneakers’ “unbelievably soft and light foam” and states that it gives runners “a cloud-like feel to your run and workout.”

When users lost the game, they were presented with two choices: to play again or visit New Balance’s mobile commerce site. While New Balance said it’s still too early to tell how the Cloud Jumper game has impacted sales, “early signs have been very strong,” Fitzpatrick said. The game did, however, generate a 5% click-through rate to New Balance’s mobile commerce site, although the brand did not specify what typical posts generate. “Given that this is a game, click-through wasn’t really the overarching goal. Instead it was building broad-based global awareness to the platform among game changers,” he said.

Of all global consumers served the ad, 20% engaged. Roughly one-third of those played all the way through. Additionally, TreSensa reported an average of 22 seconds spent with the game. “For a very hyper-casual game mechanic like this, where a user could actually play two to three times within that timeframe — because it’s hard and you lose pretty quickly — those results are really good,” said Grossberg.

Plus, Fitzpatrick said at least 12 markets outside of the U.S. opted to run with the creative on their various social media platforms (New Balance Canada and New Balance Mexico, for example). For Fitzpatrick, that was a big win.

“Finding something for a brand like ours that both the U.S. and the Chinese market can both get behind and find success in, that’s a huge win. Any time we can hold hands and show up like a global brand, it’s a good day,” Fitzpatrick said.