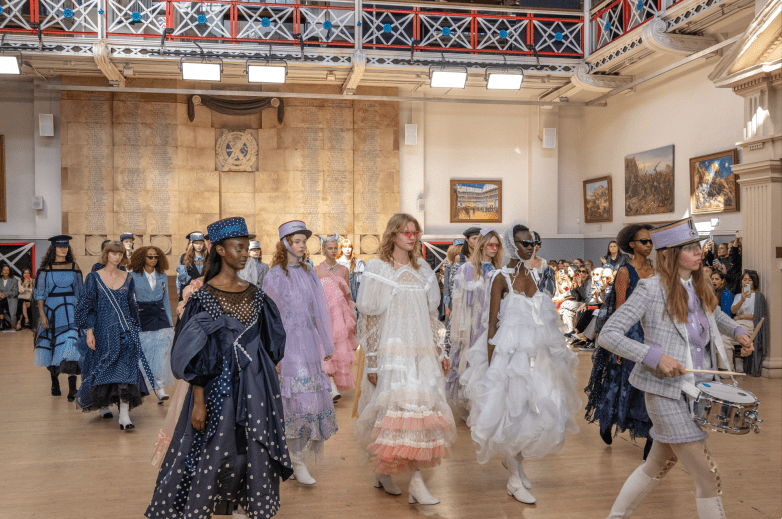 LFW Briefing: ‘The week carries on’

With Queen Elizabeth II’s funeral scheduled for this coming Monday, many designers and brands, including Burberry and Raf Simons, have moved or canceled their shows. However, the sentiment from several designers remains staunchly British: Keep calm and carry on, as the business of fashion keeps running.

Harris Reed, one of the most promising young designers on the LFW fashion scene, was also one of the first designers to show, on Thursday evening. Reed’s first runway show featured his structural circle gowns that subvert the tropes of a debutante ball. It was also the runway debut of his bridalwear that is becoming a bigger part of the brand’s business. In the run-up to his show, the designer shared an Instagram Story stating that “the show must go on.”

Patrick McDowell, who held appointments on Friday as his show was moved to October, dedicated his collection to Her Majesty, Queen Elizabeth II with his collection entitled “Marie Antoinette goes to Liverpool.”

“Creativity is very resilient. As we’ve seen in the last two years, we’ve continued to be resilient. Although this was a little bit of a shock, everybody banded together and has been very supportive of each other,” he said. “That’s how the modern fashion industry is: supportive, nurturing and sustainable. Maybe it’s good practice for everyone to be a little bit more future-facing and resilient?”

Tributes to the monarch defined the collections of many designer collections on Friday, including Paul Costelloe and Bora Aksu in the afternoon. Irish-born designer Paul Costelloe is one of the most established designers on the London Fashion Week roster, with a career that spans 30 years. He had store locations in Paris, Milan and the U.S. before becoming the personal designer to Diana Princess of Wales from 1983 until her death.

“​​It was a modern attempt at bringing fashion into this new era,” he said of his brand’s spring 2023 collection.

Discussing the Queen’s passing, Costelloe said, “​​It’s been a moment in history, and everything is part of that moment, including this fashion show. We wanted to keep it very lowkey and ensure respect. My sons and daughters sang ‘Jerusalem,’ which is a very important piece of music here in the U.K., and reflects on our sadness, but also joy.”

Turkish designer Bora Aksu placed black bows on the seats of his show, in tribute to the Queen. “We thought that, because of the mourning period, the show would also be canceled. But there was so much work that had gone into it, and we were thinking, ‘Actually, the Queen would have wanted us to carry on,’” he said. “We can still show respect while showcasing our work.”

The collection was a reflection of a world in turmoil, which has become a frequent motif of LFW as more designers engage with political messaging. “It was almost like creating these girl soldiers,” he said of the designs he introduced on the runway. “There are lots of wars happening at this moment around us. I wanted to show that you don’t need to be this tough person to fight evil; innocence can fight hate,” said Aksu.

At the moment, Bora Aksu has 64 independent stores around the world and is considering wholesale partners. The plan is to remain focused on small runs of clothes while using deadstock materials. “This store idea will still carry on, but we’ve decided to keep it personal and private, instead of going into mass market directions,” said Aksu.

Friday also featured dance presentations, at the Harri show. Harikrishnan, the designer behind the brand, has been reinventing latex with his inflatable trousers. Those pieces have been for sale on the brand’s e-commerce site since 2020, for $1,900. This new collection is focused on movement, but the designer is still staying away from more commercial partnerships in favor of art projects.

One of the final shows on Friday was that of Edward Crutchley, whose collection was focused on change. In the last year, Crutchley has upped his focus on couture and fabric design. “Couture is where you can push your ideas to the farthest point,” he said. “The work gets to the highest level possible, as far as you can imagine.” Based on the Greek philosophy “Πάντα ῥεῖ,” or “everything always flows,” the designer took inspiration from crashing waves to create flowing psychedelic dresses with a new interpretation of the quilted cloqué fabric.

The Institute of Digital Fashion, one of the most forward-focused think tanks in London, is bringing the metaverse to London Fashion Week. Scannable QR billboards will be scattered across London from September 16-20, and metal QR access tokens will be given out by the founders at spots across the capital. These will provide access to an LFW NFT drop called “IoDF 001,” as well as an IoDF “allowlist,” granting access to future IoDF projects.