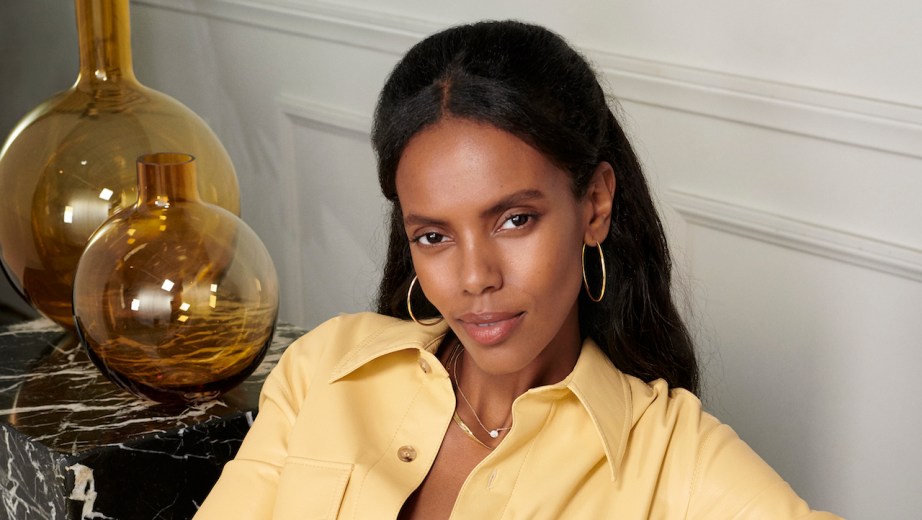 DTC jewelry brand Mejuri is debuting two new, intertwined initiatives on Wednesday: the brand’s first foray outside of jewelry, with the launch of apparel styles, and a weeks-long campaign leading up to International Women’s Day in March.

The apparel consists of soft jersey sweatshirts embroidered with the word “Golden” in gold thread. They correspond with the campaign, called “Golden Together,” which is centered on the idea of women helping women. One hundred percent of the proceeds from the sweatshirt sales will go to the Mejuri Empowerment Fund that was established in June 2020 and supports education for women and non-binary people. Mejuri donated $120,000 to the fund last year and is committing an additional $120,000 in step with the campaign.

Jenna Lyons, actress Annie Murphy of “Schitt’s Creek,” model Grace Mahary, president of the Black Business and Professional Association Nadine Spencer and restauranteur Lindsay Jang will be faces of the campaign. As such, they’ll be featured in the marketing and product photography, and will post about the campaign on their respective social media accounts.

The pandemic woke many people up to the ethics of consumption and how their purchases can positively or negatively impact the world. Sixty percent of people have reported making more ethical consumption choices in the last 12 months, according to a January 2021 study from Accenture. Recently, smaller brands like Mejuri to giants like Nike have launched initiatives centered on improving the lives of Black people, women, LGBTQ people or the environment, catering to today’s conscious consumers.

Mejuri founder Noura Sakkijha, who started the company in 2015, said it’s always been based on women buying jewelry for themselves, as opposed to the older, traditional idea of men buying jewelry for women. And 70% of Mejuri’s sales are, indeed, to women buying for themselves. Sakkijha said the Empowerment Fund supports that idea and that branching out into apparel was an affordable way to get existing customers on-board. The sweatshirts are priced at $85, while most of Mejuri’s jewelry sells for over $100.

“We designed everything in-house — the product design, the photography and videography,” Sakkijha said. “It was a bit of an adjustment, though, because apparel actually has a longer lead time; it takes longer than jewelry to make changes to the design.”

Sakkijha said she will be relying on her standard marketing mix for this campaign, which has leaned heavily on social ads and the brand’s nearly 1 million followers on Instagram (a 90% increase since 2019) in the last six months. Each of the women involved will post about the campaign at least once from their Instagram accounts, to their combined 1.63 million followers. The brand will also leverage its editorial vertical, the Style Edit, which launched last year, to promote the campaign. It will feature interviews with several of the women and information about the Empowerment Fund. Mejuri declined to give readership numbers on the Style Edit, but said the majority of readers come to the articles from brand emails.

Prior to the pandemic, Mejuri saw success with out-of-home billboard ads, and last year, it began experimenting with linear TV ads. Sakkijha said she was surprisingly pleased with the results of TV advertising and is interested in continuing with the channel, though she declined to share specific results.

Jewelry has been one of the most resilient fashion categories over the last 12 months. After a falloff in sales in April, jewelry made a big comeback, with sales growing by more than $1 billion compared to 2019. Mejuri was a beneficiary of that rising tide, seeing its fifth consecutive year of growth. Sales increased the most in the most expensive categories, including “heirloom” pieces with large diamonds for around $1,400 per piece.

Sakkijha said the success of the Golden Together collection will help determine whether Mejuri will sell apparel moving forward. She said the quantities for this batch of apparel are not ultra limited or exclusive — over 1,000 units were ordered — but are still a modest investment compared to jewelry, which has more expensive materials and a more rigorous production process.

“The whole idea of trying out [apparel] was as a visual way to extend the Golden Together campaign in a way that was easier, more affordable and more memorable than jewelry,” Sakkijha said. “We received so many questions from customers over the years about doing merch or apparel, and we thought it would stand out against the rest of our catalog. So I can see us doing it again, but jewelry will always be our main focus.”