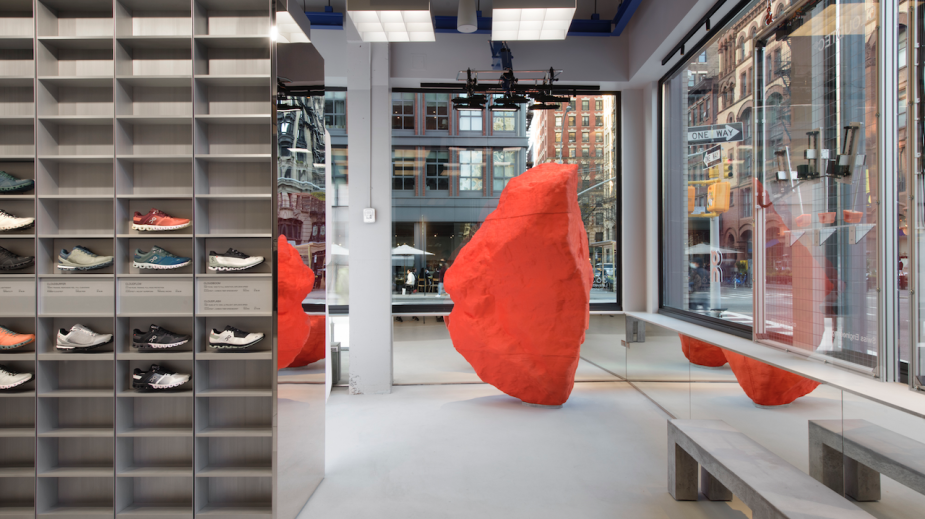 One concept, minimal clutter: Inside On Running’s minimalist approach to its first flagship

On Wednesday, Swiss running shoe brand On opened its first owned retail property, a flagship store in New York City’s NoHo neighborhood. The store, spare and free of excess clutter, is built around a central thematic and technological concept: a wall fitted with hundreds of depth cameras and sensors that can accurately gauge a user’s running style, or gait, and scan their foot shape.

On co-founder David Allemann said it was important for the store to have a strong central concept. In a time when brands are closing unprofitable stores and customers are increasingly move online, Allemann said he could only justify a big brick-and-mortar expense if it offered something unique and experiential.  The NoHo was chosen for its proximity to retail hubs including SoHo and because close to 10% of On’s 12 million customers live in New York City.

“Brick-and-mortar has a great future, but only if it’s done right,” Allemann said. “In the pandemic, people need a reason to come back to the store beyond the transaction. People are a lot more intentional about their shopping these days. The question for us was, ‘How can we maximize the value of the experience of coming into the store, while minimizing everything else about it?'”

The 62-foot wall, nearly the entire length of the store, is the main attraction. As customers walk by it or wave their hands in front of it, the abstract images change based on their movements. Allemann said he wanted all the focus to be on the wall. The store’s only other feature is a small exhibit showing how the depth cameras work.

When customers run from one end of the store to the other, the depth cameras analyze their gait and automatically match them to one of 50,000 unique running profiles in On’s database, which were compiled over the years through more traditional treadmill analysis technology. The wall then recommends three pairs of shoes, accordingly. The flip side of the wall, which is freestanding in the middle of the store, is filled with drawers for every On shoe in every color. Pulling out a drawer reveals one pair in every size available. Customers can grab the one they want, check out via a sales associate’s device (there are no cash registers to be found) and leave. Allemann said the whole process can take less than five minutes, if customers are in a hurry.

On’s strategy lines up with what retail analysts have been saying about the future of brick-and-mortar. It’s not that customers will never want to go into a store again, it’s that they need a compelling reason to do so over just shopping online.

“As much as retailers are able to move everyday things online, allowing only the most important interactions to be handled in-store by live agents, the better experience for their customers and the higher likelihood those customers will return to shop with them again,” said Durk Stelter, chief revenue officer of customer experience platform Linc.

On, which has 6,000 global retail partners ranging from Nordstrom to independent running shops, will be promoting the store across sponsored social posts and through the regular organization of free runs that start at the store. Allemann said the increased interest in running across the U.S. since the pandemic began has been a boon for On, which has seen a number of new runners asking sales associates for guidance via email or chat. Sales of running shoes spiked heavily over the summer, according to NPD, seeing 30% year-over-year growth in June, which was the highest increase the category has ever seen. Brooks Running has seen more than 50% growth in sales over the course of the pandemic.

On has seen a 50% increase in sales this year, as well, and its subscription program, launched in September, had a strong start, adding 5,000 new subscribers a day by the end of its first week.

On has no set plans to open additional stores and said that rents changing in the city during the pandemic was not a factor in their decision to open, since they had the location locked in for at least a year. While Allemann said he hopes the NYC store can introduce a whole new audience to On, he rejects the common idea that a flagship store can just be a brand builder and not a money maker on its own.

“The store has to be both,” he said. “It’s not built out of the marketing budget. The store has to pay for itself, and we expect this one will. A major KPI for me is if people can come into this store as a new customer and leave a convert. That’s hard to do with just a social media campaign.”