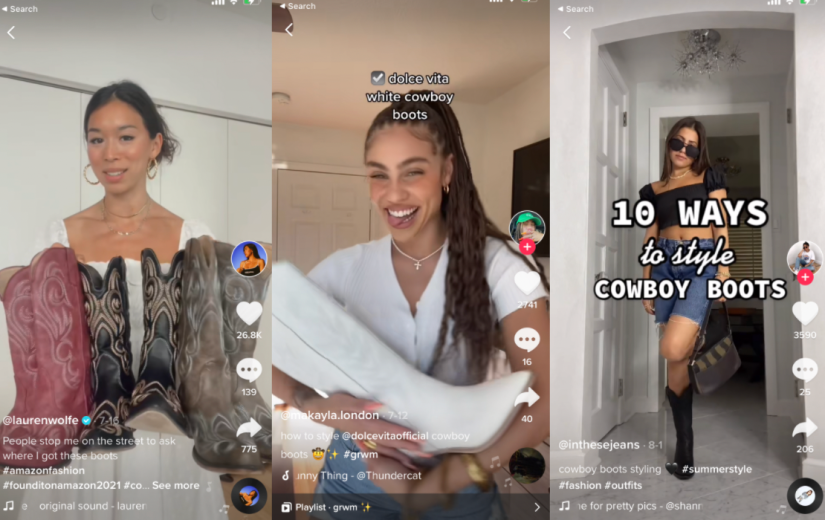 After a year where the biggest fashion statement most everyone made was around their choice sweatsuit, trends with a personality are coming back, at last. Case in point: the cowboy boot. Though Western-style boots trickle in and out of fashion every few years. They’ve been worn by everyone from Princess Diana to ASAP Rocky. This time around, the trend is being fueled by Gen Zers and their love of thrifting.

“​​It wasn’t until this summer that the style started to gain mass popularity, and much of their success can be attributed to TikTok,” said Kristin Breakell, content strategist at Trendalytics. The #cowboyboots hashtag has 139.7 million views, showing the extent of the trend.

“It girls” like Devon Lee Carlson and Lily Rose Depp were early adopters. Depp wore a full Western look to her 18th birthday party, back in 2017, and Carlson posed in cowboy boots on Instagram the same year.

Fast forward to 2021, and TikTok is filled with videos on how to style the trend and which versions available on Amazon are best. TikToker Lauren Wolfe (530,000 followers on TikTok) has one of the most popular videos, with over 325,000 views. In it, she says, “If there’s one thing that I own that people will compliment me on the street on or ask where I got them from … they’re my cowboy boots.” She then reveals that she loves them so much that she bought the style in three colorways. Hers are under $100, from Roper via Amazon Prime.

Trend-driven brands like Jeffrey Campbell ($235) and Dolce Vita ($240) have come out with all-white cowboy boots, which have been particularly popular. The hashtag #whitecowboyboots has close to 1 million views alone, with slews of videos dedicated to the sub-trend.

Designer brands like Isabel Marant also sell cowboy boots, but they’re often around $1000 or more. Many younger customers are opting for secondhand versions, which can be found ranging from in the $65-$250 range on Depop, Gen Z’s favorite resale marketplace. Cowboy boots currently rank in the top-50 trending product searches, with approximately 30,000 unique users searching the term in September alone.

In an August video, TikToker Annie Paventy (124,000 followers on TikTok) recommends wearing cowboy boots in place of white sneakers, showing their versatility. “It’s so effortless and chic and just…,” she says, as her voice trails off and street-style photos flash behind her.

Cecie Baranyk, a 22-year-old student at Indiana University Bloomington, first got into cowboy boots in 2019, inspired by her 25-year-old sister, whom she calls her “fashion icon.”

“[My sister] was doing the Western thing a little bit, going into the pandemic. And I wasn’t quite there yet, but I thought it was cool. She liked the cuts, the collars, the cowboy boots and stuff. And now I’m dabbling in the Western world. With cowboy boots, you always have one pair in your closet. But right now, I’ve got about three. They’re fun, and they elevate an outfit in a way that a regular leather boot wouldn’t do.”

And the Western trend goes far beyond just boots, Baranyk said. After noticing her sister’s boots, it was Landes Hutson, an Indianapolis-based vintage seller on Depop, who “pushed her over the edge.”

“[She] rocks a cool bolo tie with a little cowboy boot on it… And then she started doing a bunch of old, vintage women’s slips and little bloomer shorts and stuff, and would put those on with chunky cowboy boots. I thought that was the coolest thing ever — this masculine, worker man’s boot, but then with these beautiful contrasts of lacy, delicate fabrics.”

As for why cowboy boots are having a moment, Breakell suggested a correlation with the way the pandemic has changed young people’s lives. “Over the past year and a half, young people have moved away from cities in an attempt to escape the crowds and save some money,” she said. “Inspired by their new surroundings, many were able to experiment with different styles that they are now bringing back to the city. For some, Western style signifies a sort of freedom and transports them to the wide-open spaces of the American frontier — themes that are especially relevant post-lockdown.”

And, they kind of go with everything.

TikTok on the runway

TikToker Wisdom Kaye, aka @wisdm8 (6.8 million followers), made his modeling debut on the runway at Balmain on Wednesday, as part of “Balmain Festival, an annual celebration mixing the best in food, music and fashion being held in Paris.” The show was streamed live on TikTok’s own TikTok account. In Kaye’s Instagram post, he wrote, “sometimes I sit, sometimes I walk.”

There’s really no limit, as far as collaborations go these days; any two brands, no matter how dissimilar they seem, can find a way to team up. The latest: Designer Susan Alexandra, whose beaded bags have become “it” items, and Philips Sonicare, known for its top-of-the-line toothbrushes. The duo teamed up to create accessories to appeal to a younger audience around the Philips One toothbrush ($25-$40), a more affordable item than Philips’ celebrity-favorite electric toothbrush, which is $350. “Philips Sonicare pursued this partnership to reach a new demographic of young adults who are looking to prioritize their health and individuality, especially while on the go,” said Marci El-Deiry, head of oral healthcare marketing at Philips, in a press release. The resulting collaboration is impressively adorable, made up of a tote bag, a toiletry bag and a bedazzled keychain. And by purchasing any of the three accessories, the shopper can redeem a Philips One toothbrush.