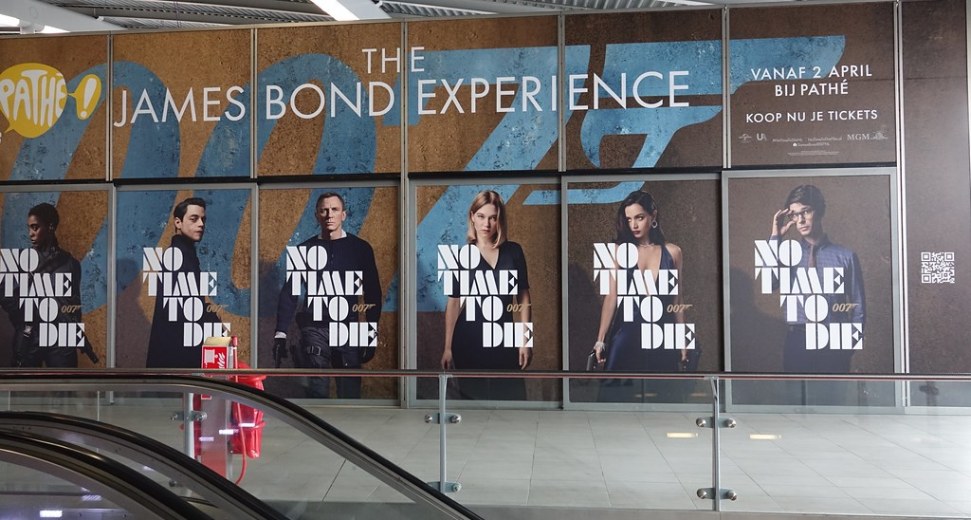 James Bond, super spy and embodiment of British sophistication, is no stranger to product placement. From the very first Bond film, the character has always been dressed in Savile Row suits and driven British cars like the famous Aston Martin. With one of the character’s defining features being his exquisite taste, he lends himself particularly well to brand partnerships.

With the latest Bond film, the long-delayed “No Time to Die” coming out on Oct. 8, the franchise has once again inked a slew of product placement deals ranging from cars and alcohol to watches and fashion. But while James Bond was once associated with a certain kind of old school luxury appeal — yachts and expensive Swiss watches  — in recent years he has been moving into the modern era. That’s included replacing British brands with American ones, replacing heritage brands with newly established competitors and even entering the wild futuristic world of NFTs.

While Bond, as played by Daniel Craig in “No Time to Die,” will still sport some of his classic brands, like the Omega watches he’s worn for decades along with storied British companies like knitwear brand N. Peal, there will also be some new additions. For one notable example, the movie will feature bags from Michael Kors, marking the first appearance by any of the brands under the American company Capri Holdings in a Bond film.

The brand’s Bancroft satchel will be carried in the film by the character Moneypenny, played by Naomie Harris. A special Bond-themed collection of the bag became available online and in select Michael Kors stores on Sept. 30, as well as on the dedicated 007 online store run by MGM where many of the film’s brand partners can be shopped. In a press statement, designer Michael Kors called the collection a “perfect marriage of film and fashion.”

Wearing American brands isn’t entirely new for Bond — he wore Tom Ford in the film “Skyfall,” for instance — but what’s more notable is the shift away from older heritage brands and toward younger, newer, hipper brands that appeal to a younger audience.

For instance, in Craig’s first appearance as Bond in “Casino Royale”, he famously wore a powder blue swimsuit by the nearly-70-year-old La Perla. But in the subsequent years, Orlebar Brown, a brand founded in 2007, has been Bond’s preferred swimsuit provider. Similarly, Tom Ford, founded in 2005, replaced the nearly 150-year-old British brand Turnbull & Asser as the provider of Bond’s dress shirts. Michael Kors, founded in 1981 and targeting consumers ages 25-45, is slightly on the older side, but much younger than Globe Trotter, a British bag brand featured in older Bond movies that was founded in 1897.

According to Dorian Banks, CEO of Cover Technologies, which develops blockchain and NFT technology, the strategic move here is for both the producers of the new Bond film (a co-production between Amazon, its subsidiary MGM and the Broccoli family) and the associated brands to reach a younger audience.

“You definitely see a shift in the types of brands they’re working with,” Banks said. “Michael Kors versus Globetrotter is a very different target demographic. It’s definitely meant to appeal to a younger, hipper audience. But there are some older British brands, like Barbour, that have established a new relevance with younger consumers, that are still around in the Bond movies for that reason. They sell well to a younger demographic.”

And this product placement does big money for both the film’s producers and the brands involved. While the exact costs that brands pay for a spot in a Bond film isn’t publicly available (and MGM declined to offer any figures), the 23rd Bond film, “Skyfall,” reportedly had more than a third of its budget covered ($45 million) by brand partnerships. Omega reportedly saw a 20x increase in sales of its Seamaster watch after Daniel Craig wore it in his first James Bond outing. In the month when the last Bond film, “Spectre,” came out in 2015, searches for Omega watches increased by a third and searches for Aston Martin jumped by 35% after they were both included in the movie.

Schmidt said one of the key components for shifting product placement strategy over time is to ensure that it’s never jarring or noticeable in a negative way to the audience.

“When we shifted Bond’s preferred drink from a martini to a Heineken or his vehicle from an Aston Martin to a BMW Z3 Roadster in order to launch that auto, those changes in brand preference still felt authentic to the character, while also making a statement about those brands,” Schmidt said.

In other words, shifting Bond from a British luxury footwear brand to an American one is an easier transition than if Bond suddenly started wearing Crocs.

Possibly no collaboration exemplifies modern Bond’s ambitions to target younger consumers better than the one between MGM and crypto company VeVe for a James Bond-themed NFT collection, debuting at the same time as the film, though not actually featured in the film itself. For Stephen Bruno, chief marketing officer at MGM Studios, branching out into NFTs is a natural part of the evolution of product partnerships with Bond films.

“As one of the longest-running and most successful film franchises of all time, ‘James Bond’ continues to evolve and innovate to meet the demands of our devoted audiences around the globe,” Bruno said.

Banks said the age demographic associated NFT consumption makes it clear that the makers of Bond want to appeal to a younger audience. People ages 18-44 are twice as likely to have bought an NFT than anyone older.

“I’m not shocked at all that they’re getting into NFTs, because so much entertainment and anyone who wants to reach this audience is or should,” Banks said. Another major franchise movie coming out in October, “Dune,” is also coming out with an NFT collection.

With “Bond” as one of the most highly desirable product placement spots in entertainment, surveying which brands are showing up in the films also says something about the brands featured.

“Obviously, the producers won’t give a spot to just any brand,” said Christopher Olivola, associate professor of Marketing at Carnegie Mellon University’s Tepper School of Business. “But it shows you who can afford a spot in a Bond film right now, who can spend to put themselves on the same level as these big heritage brands like Omega.”