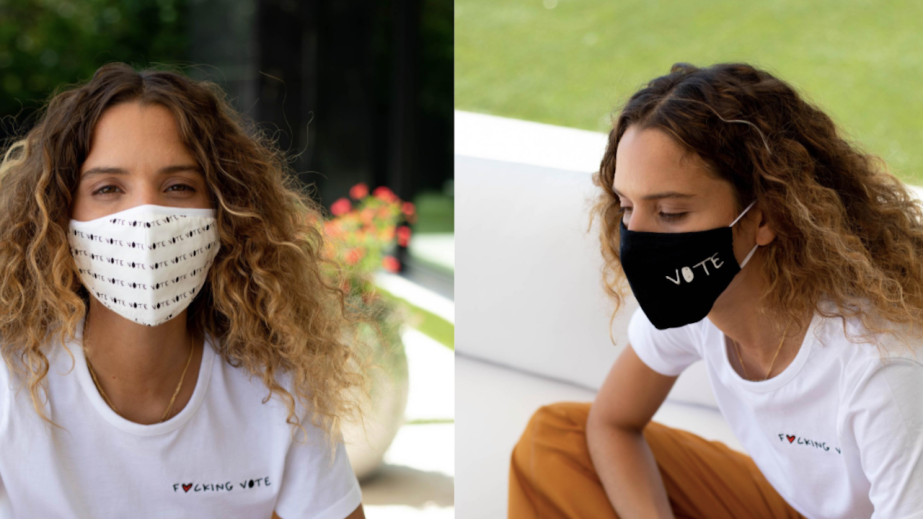 Fashion brands are eschewing neutrality around the election

Molly Howard, co-founder of La Ligne, said her brand has never shied away from supporting political causes. In 2016, the company sold a shirt that said “je suis avec elle,” meaning “I’m with her” in French. But in 2020, the brand, like many, has found itself leaning even more into unabashed political statements and away from a false pretense of neutrality.

The company released on Tuesday a collection of T-shirts and masks designed in part by artist Cleo Wade and emblazoned with calls to vote. One-hundred percent of the proceeds are going to Stacey Abrams’ Fair Fight organization which protects voting rights and helps register people from underrepresented communities to vote. Howard said the brand sold out of over 1,000 masks within the first hour and that its factory in Portugal agreed to rush another shipment at no extra cost to meet demand.

La Ligne joins a diverse range of brands and retailers — including Gap, Old Navy and American Eagle — that are all launching prominent voting-rights-themed collections and campaigns in the coming weeks, particularly with a progressive bent.

Howard said the Black Lives Matter protests that began earlier this year were a major catalyst for the brand to take a more active stance on politics. Howard said, starting in June, she started doing weekly optional check-ins with employees to talk about sociopolitical issues and to gauge how people were feeling about the state of the world. Those conversations helped fuel the brand’s decision to be more vocal about its political support.

In an election year, those issues became even more important. Howard said she has no qualms making her opposition to Donald Trump known, even if it potentially alienates some consumers.

“You can’t be everything for everyone, no matter what — even if you stay totally silent on politics,” Howard said. “We all know that. So why do we fear offending a customer and remaining silent on important issues of human rights? It would be fraudulent to pretend we don’t care about this stuff. We featured a woman in one of our campaigns who was an Iraqi translator and immigrated here and was working to get her family to immigrate as well. How could we post a picture of her and yet not stand up for her rights as an immigrant? It’s fraudulent to pretend to be neutral in times like this.”

Mary Alderete, CMO of Gap, expressed a similar sentiment. Gap has several campaigns lined up that are themed around election day, racial justice and climate activism. They include Instagram talks with activists and a voting-themed collection that Alderete said was designed by members of Gaps’ African-American employee working group. Additionally, both Gap and La Ligne said they would be paying employees an undisclosed rate on top of their base pay to volunteer to be a poll worker on election day.

Efforts to get more people to vote typically favor progressive candidates. President Trump has cast doubt on the effectiveness of mail-in voting, despite there being no evidence that it’s a particularly fraught process. A top Trump campaign advisor Justin Clark reportedly said in a leaked audio from 2018 that the Republican party and the Trump campaign in particular has relied on voter suppression to win.

Designers like Jason Wu, Tory Burch and Vera Wang have all publicly supported Joe Biden, and even designed merchandise for the campaign.

“[The BLM movement] definitely had a big impact on how we approach these things,” Alderete said. “The killing of George Floyd was a pivotal moment for the whole nation. It was an enough-is-enough moment. We’ve supported progressive movements for LGBT rights and climate activism before, but we’ve always done it kind of quietly. But I think now we’re starting to be more vocal about it. We have to be.”

Nordstrom has made election day a paid holiday for all employees and has begun offering curbside voter registration at its stores.

Howard said she has felt freer to be more open about the progressive political causes she wants to support partially because her company is small; she isn’t as constrained as a larger company might be when putting together something that might potentially alienate a more conservative audience.

“We have a lot more freedom than most,” Howard said. “The decisions are mostly made by me, Meredith [Melling, co-founder] and Valerie [Macaulay, c0-founder and chief creative officer], so it’s just whatever we talk about and think is right. And we are transparent with our staff, too. We discussed everything with our teams before we did it and made sure everyone was on board.”

But Alderete said even at a company as large as Gap, the team is feeling emboldened by the moment.

“You’d think we’d be more constrained by our size, but because the leadership is all in agreement, it hasn’t been that much of an issue,” Alderete said. “The board, the Fisher family [chairman Robert Fisher is the son of Donald and Doris Fisher, who co-founded Gap] and the CEO, we all talked about whether we should do something after George Floyd was killed. We talked about it on a Saturday morning, and a few hours later, we had a game plan.”

This isn’t the first time that fashion has been more open about political leanings. In 2016, numerous designers like Parabal Gurung and Ralph Lauren made their preference for Hillary Clinton clear. Alderete said the Fisher family has supported the company’s efforts to promote racial justice and voting rights. But it should be noted that Robert Fisher, along with brothers William and John Fisher, reportedly donated $9 million to a dark money group seeking to defeat Barack Obama in the 2012 election.

The years since 2016 have seen brands like Gap being a little shier with their political statements, according to Alderete. But a pandemic, an election year and a national movement for racial justice have pulled brands back into the fray.