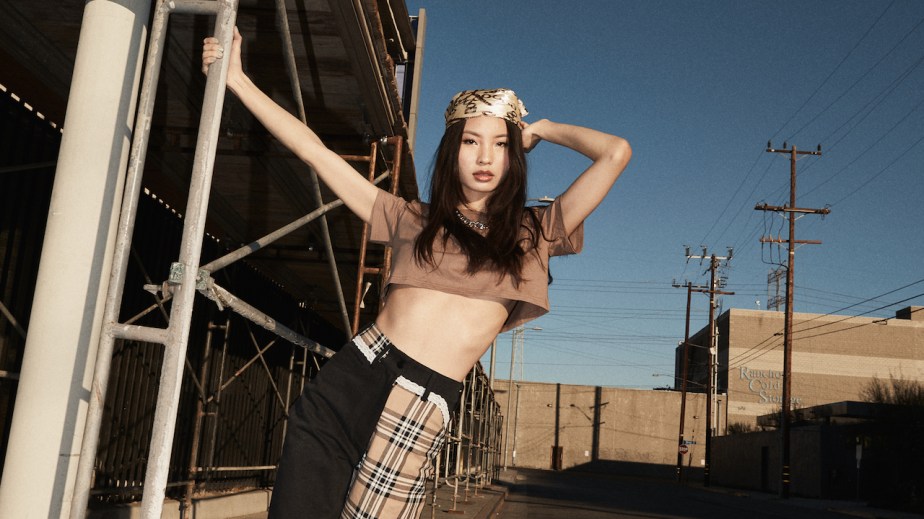 In this week’s Fashion Briefing, we go inside the product launch strategies of two brands hellbent on avoiding overproduction.

TikTok is the new runway.

That’s according to the team behind Finesse, a fashion brand that came out of beta on Wednesday. The L.A.-based company, designed according to Gen-Z ideals, makes affordable styles that reflect the most-talked-about fashion trends on social media. It relies on AI to pinpoint what’s hot and gauge demand to avoid overproduction; Finesse turns around new styles in 25 days, using 3D product samples to expedite the production process and eliminate waste. And every week, customers can shop drops on its DTC website usually consisting of 4-5 pieces that work together as one outfit.

“Fashion trends used to be hermetically sealed and gated in the catwalks in Milan and New York, and in magazines,” said Ramin Ahmari, founder and CEO of Finesse. “But the trends are on the backs and bodies of Kendall and Kylie [Jenner] and Gigi [Hadid], and more of those influencers we all follow on Instagram and TikTok. And that’s data that is directly accessible to us.”

On Wednesday, Finesse announced $4.5 million in pre-seed and seed funding largely from tech investors. They include Alex Roetter, former head of engineering at Twitter; Sam Teller, co-founder of FabFitFun; Hoxton Ventures, MaC Venture Capital and Mango Capital, among others.

Finesse’s plan to “innovate away the inefficiencies of the fashion industry with the use of data and tech,” as stated by Ahmari, is familiar. In mid-2018, New York- and China-based Choosy launched with VC backing and a premise of Instagram-driven collections delivered in bi-weekly drops. It offered styles in small batches and on pre-order, and touted a production time of two weeks. However, its e-commerce site is currently “under maintenance,” it hasn’t posted on Instagram since October, and its styles at Verishop, which it linked with in April 2020, are deeply discounted on the site. The company did not respond to request for comment, and a Verishop representative declined to comment.

But Finesse is betting big on the virality, community and creativity enabled by TikTok, which has since caught on in the states and may prove the difference-maker. Fashion brands from Aerie to Louis Vuitton have invested in building a presence on the platform in the last year, in response to realizing its power to fuel buzz, and sales.

Finesse’s team of data scientists has developed a proprietary knowledge graph that factors language and aesthetics data across social media channels, Google search, online magazines and online forums. Its primary focus is scouting for comments showing interest in a fashion style, like, “I love this dress,” “Where can I get this?” and “How does it fit?” — questions that are most prevalent on TikTok, thanks to the “extremely vocal” user base, said Ahmari.

Each resulting look has a designated persona, like the skater-inspired Jacko drop that “will have you feeling like a total daddy or baddie,” according to the product page description, and the Maddie drop featuring a cropped cardigan and miniskirt, meant to exude “Euphoria vibes.” They play into the company’s target customer demos, inspired by TikTok’s fervent communities. Included are the tech-savvy “Gen-Z Sweetheart,” who’s 14- to 16-years old; the vocal “Gen-Z LGBTQ  Queen,” often in the Black trans or fem trans community and 16-20; and the fashion-forward “Gen-Z Baddie,” age 19-24.

The company’s established a “left-brain, right-brain” employee setup that includes engineers with experience at NASA and product executives from Revolve, said Ahmari. Andrea Knopf, vp of product, formerly led design and development for 26 celebrity and influencer fashion brands at Revolve leading up to the company’s 2019 IPO. They included Nicole Richie’s House of Harlow 1960 and Aimee Song’s Song of Style. “There, it was about quantity; my job was to scale,” she said.

At Finesse, the focus is speed: Within 24 hours of recognizing a worthy trend, Knopf and her team put their own spin on it, then work with the company’s 3D designer to deliver the details to production partners. Knopf connected Finesse with trusted suppliers from her Revolve days, including factories in China.

Monthly collaborations with TikTok influencers will be also part of the business model, based on knowledge graph data on the highest-growing and -performing talent. They’ll kick off with a look by Maya Abdallah (1.5 million followers) in February.

Since the soft-launch in November, the company has seen a return rate of under 1%, with a majority of shoppers opting to buy a drop’s full look versus select pieces. To date, available pieces have ranged in price from $16 for bike shorts to $116 for a three-piece loungewear set. Though its Instagram following is larger (16,000 followers), it’s seen more sales driven through TikTok (4,000 followers) A post featuring its Rara pants, that played into the viral V-cut waist trend, saw more than 1 million views and sold out in early January.

Ahmari said the company will continue to produce limited quantities of pieces to avoid waste. But, when styles sell out, many will be offered to customers on pre-order, to be delivered in 2-3 weeks.

Eventually, via polls on the brand’s website, shoppers will have the opportunity to vote on which look is dropped and what details it features. Also down the line, Finesse plans to release multiple drops per week and to personalize each shopper’s online experience based on their style preferences. Expanding its size range from XS-XL to XXS-3XL is a priority, said Ahmari. And launching a Finesse influencer house is a goal.

“People [in fashion] aren’t giving TikTok enough attention or valuing the talent,” he said. “There’s so much more that can be pulled out of this movement.”

‘The way forward’: Misha Nonoo on ramping up comfort and sustainability in 2021

On Wednesday, Misha Nonoo introduced the Perfect 10 capsule collection. It’s the brand’s first new capsule since launching its versatile, work-perfect Easy 8 set when entering the DTC space in 2016. Comparatively, the Perfect 10 collection is less tailored and “dressed,” and more casual and comfortable, said founder and creative director Misha Nonoo. For example, it features a T-shirt and sweatpants. Prices range from $70-$250.

“This is our new functional wardrobe,” she said. “It’s made for this year, what life looks like now.”

To market the pieces, Misha Nonoo featured images across its digital channels of “entrepreneurs, self-starters and female founders” wearing self-styled looks composed of Perfect 10 pieces. They included Charlotte Rey, co-founder of design consultancy Campbell-Rey, and Jules Miller, founder of The Nue Co. It’s the first launch of many Nonoo has planned for 2021. Still to come are product expansions and collaborations with brand partners that are also “very into” sustainability.

Below, Nonoo discusses her new collection and one of her goals for the year ahead.

What inspired the Perfect 10 capsule?
Last August, I thought, “If 2021 isn’t the year that we’re all immediately going back to work, and we’re still living this hybrid lifestyle, and travel is still slower than what it once was, then what is the new uniform? What does our new life need?” Now, we’re used to this slightly more comfortable, casual work kind of uniform. Even if you’re on a Zoom, you can be wearing a Husband shirt, but you can have a pair of sweats on underneath and be comfortable, because you’re going to walk the dog in a second. There are things that can be dressed up. But our lifestyles have changed.

How did the events of 2020 impact fashion?
With people being more into sustainability and being more conscious, more [brands] realized they can’t ignore the waste that the fashion industry generates. And now, they want to think very seriously about how they try to manage that. For us, being on-demand was a lifesaver — we didn’t have inventory that we had to sell off when demand was softer than usual. So we really want to bring our on-demand model and the way we produce —  the technology and the supply chain that we’ve been able to create — to other fashion brands this year. Because we believe it’s the way forward. We have the software in place for us to start on-boarding people, and we’re slowly starting to do that. But it’s something that we want to take our time with. We want to make sure that brands are really ready for it — but we feel the industry is ready.

Inside Tradesy’s tech-first approach to resale.

Alber Elbaz is back.

2020 was a “tipping point” for brand transparency.

An OG of the online fit quiz is upping its game.

The RealReal is opening more stores.