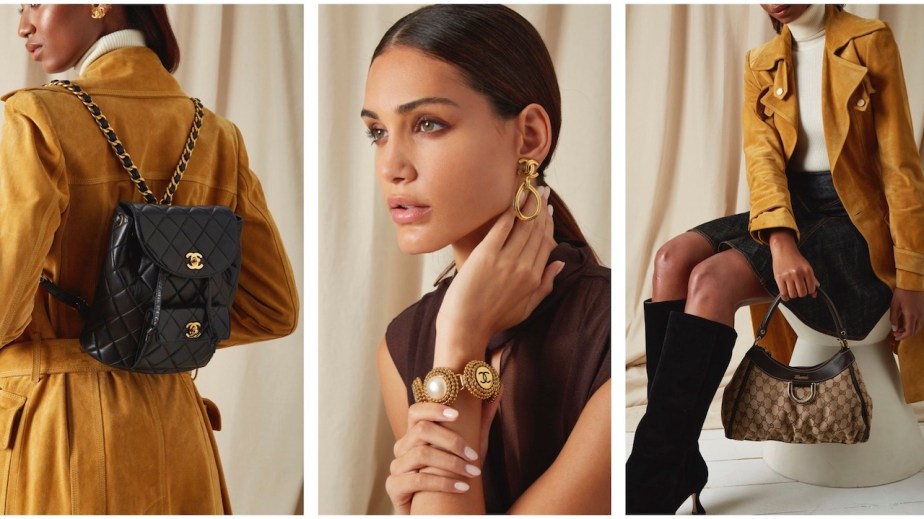 This week, a look at the ongoing democratization of luxury, through a new Amazon launch. Scroll down to use Glossy+ Comments, giving the Glossy+ community the opportunity to join discussions around industry topics.

So much for luxury fashion brands holding out on Amazon.

On Thursday, Amazon’s Luxury Stores kicked off an exclusive partnership with New York-based What Goes Around Comes Around, bringing 10 of the top designer names onto the marketplace in an official capacity. The 29-year-old luxury resale company, which largely trades in classic handbag styles by Hermès, Dior and Chanel, is now selling nearly 300 products on the platform. That includes a $10,000 Rolex and a $50,000 Hermès Birkin. Louis Vuitton styles make up a majority of the products, with more than 150 Speedy and Pochette styles up for grabs. And there are more than 90 products by Chanel, a notorious e-commerce holdout. Rounding out the designer list are “Pre-Loved” Gucci, Goyard, Dior, Prada, Fendi and Yves Saint Laurent.

Amazon launched Luxury Stores in September 2020, providing a more elevated shopping experience to luxury brands and consumers. At the time, it was widely called a play to mimic the success of Tmall with its Luxury Pavilion. But since debuting with a sole brand partner, Oscar de la Renta, the vertical has been slow to attract top fashion labels, with LVMH and Kering brands keeping their distance. That’s despite designer companies becoming less precious about their distribution during the pandemic. Indie brands including Missoni, Altuzarra and Sergio Hudson are among its 33 fashion partners, many of which fall within the accessible luxury category. And Luxury Stores has rounded out its assortment with 13 beauty brands, including Clé de Peau in October 2020. The What Goes Around Comes Around partnership boosts its total brand count by about 20%, to 57.

When retail stores were forced to close in 2020, many luxury brands realized the value of e-commerce. And for those selling almost exclusively in stores, resale platforms temporarily became the prime owner of their sales. Several, including Valentino, Gucci via Gucci Vault and, last month, Balenciaga, have since launched resale on their own websites.

“I’m sure the brands are not super happy that we’re creating a greater level of accessibility, which goes against their exclusivity goals,” said Seth Weisser, co-founder and CEO of What Goes Around Comes Around. “But it’s the way forward.”

What Goes Around Comes Around has no direct partnerships with brands, instead obtaining most of its products from “top dealers and collectors” around the world, Weisser said.

What Goes Around Comes Around and Amazon have been in talks about this partnership for about six months, Weisser said. But the two have already worked together. Clients of What Goes Around’s wholesale business, which makes up a majority of its revenue, include Amazon-owned fashion e-tailer Shopbop. According to Weisser, Amazon became sold on the luxury resale opportunity after Shopbop started inching its WGACA-sourced products onto its “The Shop by Shopbop” Amazon store. What Goes Around Comes Around sells direct through its flagships in New York and Los Angeles, in addition to its e-commerce site. Its wholesale partners also include Dillard’s, Kith, Disney and hotels.

Amazon Fashion’s PR declined to share Luxury Stores’ shopper base, sales and growth, and its sales are not broken out in Amazon’s earnings. In a press statement, Muge Erdirik Dogan, president of Amazon Fashion since last year, said the What Goes Around partnership gives Amazon customers “more options to shop for themselves and their loved ones.” And she stressed that Luxury Stores “continues to expand [its] assortment.”

Erdirik Dogan also noted that the timing of the launch, at the start of holiday shopping, was strategic.

According to Weisser, What Goes Around Comes Around’s sales are “heavily weighted” in the fourth quarter, typically 35% of its annual total. He anticipates that number will be higher this year, as “consumers’ concerns about economic headwinds are calming and they’re getting back to consuming.” While luxury has so far remained relatively unscathed, overall holiday sales growth is expected to slow this year, and many brands have lowered their Q4 projections.

For What Goes Around Comes Around, which hadn’t sold on a third-party marketplace prior, the Amazon partnership provides growth opportunities. Annually, WGACA typically sees double-digit sales growth and increased profitability, Weisser said. But WGACA’s sales have been “flat” for the last year and it’s closed stores since the start of the pandemic.

In addition, Amazon provides WGACA a comfortable level of control over the customer experience, said Julian Guevara, vp of retail and client services at What Goes Around Comes Around. WGACA was able to “tailor” its Luxury Stores storefront, plus it packs and ships sold products from its own warehouses, versus Amazon’s. By early next year, it will be part of the Amazon Today program, enabling two-hour shipping and store pickup to customers near its stores.

“Amazon is just the biggest,” said Weisser. “And Luxury Stores is a good storefront opportunity for luxury brands. There’s a different [leadership] team guiding plans for the department, and it feels ‘luxury’ and reflective of our brand values. If it wasn’t separated out, it wouldn’t have appealed to us in the same way.”

He also said the exclusivity of the partnership was a clincher. What Goes Around Comes Around was an early Farfetch resale partner, but the marketplace became crowded with competitors, diminishing the opportunity, Weisser said.

Amazon is clearly investing in growing its designer fashion business, expanding Luxury Stores to Europe in June and making hires including Vogue alum Sally Singer, whose title is head of fashion direction. Amazon Fashion is sponsoring the CFDA Awards, set for November 7, plus it’s backed several elaborate Luxury Stores campaigns. Its latest, for fall, features Irina Shayk and Tommy Dorfman. Weisser said Amazon’s marketing offerings and on-site redirecting capabilities were a draw for What Goes Around Comes Around, and he anticipates a “halo effect” of Amazon shoppers visiting its site and stores. What Goes Around Comes Around offered international shipping ahead of the partnership.

Amazon is on the right track, said Sunny Zheng, analyst at retail research firm and advisory Coresight Research. Though drastically more limited, “Luxury Stores’ products are more refined, compared to The RealReal and ThredUp,” she said. “Especially in the current inflationary environment, where shoppers have become more selective of products, only high-quality second-hand luxury goods with the right price can satisfy.”

The partnership also doesn’t put luxury brands at risk, due to “the resiliency of high-income shoppers,” she said, adding, “They’re unlikely to trade down to second-hand products.”

What Goes Around Comes Around is also at risk, he said: “If it works, Amazon [could] decide they can do it on their own and cut out their partner,” he said. “It could be a case of a short-term explosive bump [for the company] that leads to long-term extinction.”

Guevara said, since soft-launching on Luxury Stores on October 13, the company has seen clear trends and a “significant” number of orders. Best sellers include Louis Vuitton’s Neverfull tote and other logoed styles, as well as “practical pieces” including crossbody and messenger bags. It will plan accordingly, catering to more “entry-level” shoppers by not “oversaturating [the site] with super-high AUR items and not deterring people from purchasing what is within their reach,” he said.

Over the next few weeks, What Goes Around Comes Around will “ramp up” its Luxury Stores product selection, including with new categories. And it will soon host dedicated drops and “special collections” to maintain interest, Weisser said.

“Amazon is giving us a [sales] target [for year one] that we feel is conservative,” he said. He owed that confidence to WGACA’s “history of success” at curating desirable product selections based on the customer habits of its partner retailers.

Weisser called WGACA’s “multi-step, human authentication process” a differentiator in the market. Also unique is the fact that it specializes in classic, timeless pieces versus trendy styles, he said. For example, unlike competitors, it won’t sell Gucci’s Yankees logo accessories.

Thanks to the rise of resale, luxury brands are popping up everywhere from Goodwill to Walmart, the former through a site that launched this month. On Walmart’s marketplace, a popular seller of luxury goods is Luxclusif, the resale company acquired by Farfetch in late 2021.

“One of the goals for our business is to make luxury accessible,” said Weisser. “That’s why we’ve placed it with retailers that traditionally aren’t associated with luxury; their customers haven’t been served by the luxury houses. Amazon provides another way for us to balance exclusivity and availability, and introduce customers who haven’t felt comfortable in the pre-owned space a safe way to make a purchase.”

“Most consumers who care about fashion want to participate in luxury,” he said.

Why Lanvin cut its valuation ahead of an IPO