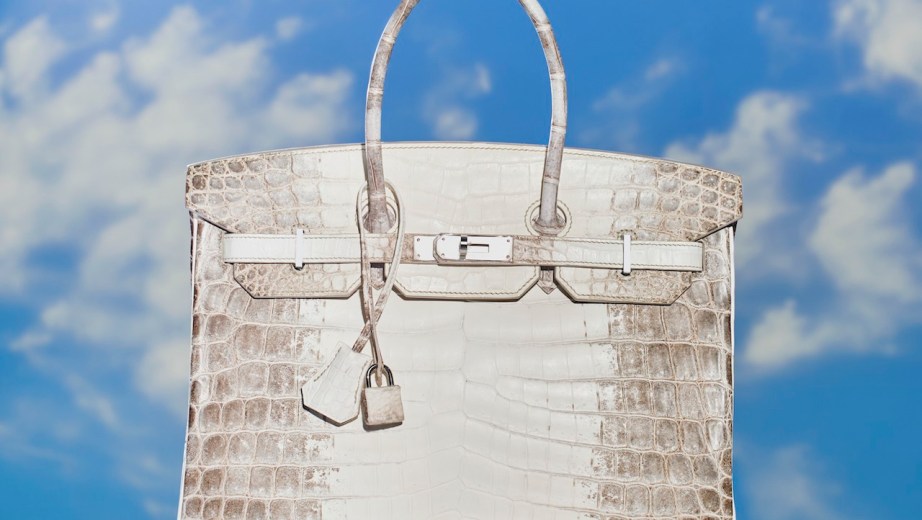 Fashion Briefing: How the pandemic drove the year of the Birkin

On Wednesday, auction house Christie’s New York reported record sales for its handbag auctions, with its May 26-June 9 online event driving more than $3.6 million. Leading the sale were a matte blue Hermès Faubourg Birkin 20 bag selling for more than double its expected price, at $200,000. There was also a Himalaya Birkin 35 selling for $137,5000 and a Cargo Birkin 35 selling for $62,500. In November, Christie’s saw record single handbag sales, with crocodile Hermès Birkin and Kelly styles selling for $389,000 and $437,000, respectively.

The sales are par for the course, considering the Birkin boom that’s being reported industry-wide. That’s despite the fact that the world is still emerging from a pandemic. Following a year of widespread instability and economic uncertainty, people are investing in handbags that have consistently risen in value. They’re safe bets. Plus, when bought at resale, their value has spiked amid luxury brands’ price hikes.

“We never saw demand for the Hermès Birkin go down during the pandemic,” said Sarah Davis, founder, president and CCO of handbag resale company Fashionphile. Fashionphile’s Birkin sales increased 16% year-over-year from 2019 to 2020, outpacing its overall handbag sales, which were up 10%. Its Birkin prices also went up 16%. And so far, its 2021 numbers are blowing last year’s out of the water: Its Birkin sales are up 182%. “While we’re all hearing about investments in meme stocks, NFTs, real estate, and Dogecoin or other cryptos, we’re seeing more investors putting their money in Birkins.”

For its part, Hermès reported in April a first-quarter revenue increase of 44% year-over-year. It did not reply to a request for comment.

Davis said that even Birkins that have been used and are not in pristine shape will increase in value. Fashonphile is currently selling Birkins marked for 50% less than their retail price, based on their condition, with the lowest being $6,000.

“There’s never been volatility in this investment,” she said. “It’s not a new trend, to us; we’ve always called these investment bags. When you think about investment bags, you’re going to land on a Birkin.”

At the time of our conversation at 2 p.m. on Wednesday, Davis said Fashionphile had just listed a rare Hermès Himalaya Birkin on its site for $225,000. When I checked back with her early that evening, it had already sold.

Other luxury resale platforms have similar stories to report. Eighteen-month-old Sellier Knightbridge, which is based in London and claims to be the No. 1 reseller for Birkin bags in the U.K., is on track to do $7 million in sales this year, up from $2.1 million in 2020 (based on exchange rates at the time of this story). U.S. customers account for 20-25% of its sales.

“We have a fastest-finger-gets-it-first situation on nearly every product [we release],” said Hanushka Toni, co-founder of Sellier Knightsbridge. Hermès and Chanel bags are its core focus. Every week or two, Sellier Knightsbridge rolls out a curated drop of 30-40 styles, which see a 90% sell-through. “We just had an Hermès style sell out in seconds. In under five minutes, 15 people were trying to buy it at checkout and hundreds more were on the product page. We had people phoning us, asking if they could still get it if they paid more.”

Toni owed the company’s success out of the gate to its “best of the best” product curation. It accepts just 20% of items submitted for resale. It also has one expert authenticator per brand, rather than “a jack of all trades, who doesn’t know their elbow from their ass,” she said, referencing authentication fails by competitors. For Hermès, that’s Dimity Giles, who owns authentication service Bababebi. “She’s the world authority; Hermès defers to her for opinions on authenticity,” Toni said. She called working with Giles a worth-it investment.

Sellier Knightsbridge attracts new sellers “every day,” from Australia to Dubai, due to the speed of its sales and immediate payments, said Toni. The more costly the item, the higher percentage of the sale price they receive, via a bank transfer. For Hermès bags, sellers often get a 70% cut.

Fashionphile has also been attracting sellers, especially at the start of the pandemic “when people were looking to increase their cash on hand,” Davis said. Its quote requests with a value of $10,000 or higher grew by 111% from the first quarter of 2020 to the third quarter.

Birkins are being traded, regardless of the source. In its 2021 Luxury Consignment Report, released in January, The RealReal reported that it sold 13% more Birkin 25s in 2020 than in 2019. In mid-May, The RealReal told CNN that the resale value of Hermès bags had continued to rise in 2021, up 28% year-over-year, with the average selling price of Birkins up $4,000.

On Tuesday, retail analytics company Edited released insights into the resale market’s current uptick that shed light on demand for luxury resale based on the sell-through rates of leading sites. For example, a majority of Vestiaire Collective’s current stock hit the site within the last three months, with just 4% of products being listed for more than a year.

That’s no doubt due to the overall digital acceleration, along with the lack of available sources for in-demand styles during the pandemic. For example, when stores were closed, resale was the only option for many people wanting to purchase certain Hermès and Chanel styles — Hermès doesn’t sell Birkins on its e-commerce site, and Chanel doesn’t offer any of its bags online. Hermes has more than 300 stores worldwide.

Companies that are digitally native have had an advantage. For example, Prive Porter and Sellier Knighstbridge do a majority of their sales via Instagram. Prive Porter, which labels itself as “the largest reseller of Hermès handbags,” expanded to physical retail in November, with a store in Miami’s Brickell City Centre. It stocks $2.5 million worth of Birkin and Kelly bags. March and April 2020 were the company’s biggest sales months to date, with each at $3 million, double pre-pandemic months.

But even prior to the pandemic, Birkin bags were “incredibly hard to get,” said Toni, calling Hermès “the world’s most exclusive brand.” For styles made in limited quantities, like certain Himalaya Birkins, “There are different theories and stories about how [the brand] goes about deciding who gets those,” said Davis.

Price increases also contributed to luxury resale’s rise: In April, Edited reported that the majority of luxury handbags on the market are now priced $2,000-$2,500, up from $1,500-$2,000 in 2019. Bags priced at $5,000 or more now make up 5% of their stocked styles. Gucci, Chanel and Louis Vuitton were among brands that boosted their handbag prices in 2020 to offset costs associated with the pandemic. All obstacles considered, the overall luxury market’s growth saw its first major dip in 2020.

“Prices are up, so people are getting much more value by buying pre-loved,” said Toni. “A jacket from a recent Chanel runway [retails for] $60,000. So even if you can afford to buy it from the primary market, you’re probably going to think twice.”

Toni said there are customers who have placed 50-60 orders and spent $115,000 with Sellier Knightsbridge in the 18 months since it launched. “They could have spent that at Hermès or Louis Vuitton,” she said.

Between April 1, 2020 and May 31, 2020, Fashionphile saw a 104% year-over-year increase in revenue from net-new users and an 85% increase in transaction volume from new users. In the same period, it broke its own record for the highest, non-promotional sales day, twice.

How Sellier Knightsbridge sells 6 Hermès bags a day from Instagram

According to the company, Sellier Knightsbridge sells 5-6 Hermès bags a day from its Instagram account, where it has 67,000 followers. Below, co-founder Hanushka Toni breaks down the strategy.

“Instagram is still where it’s at for the luxury shopper, while TikTok is quite [more popular with] Gen Z. It’s a younger demographic, and it’s fun, but it’s not likely a platform you can commercialize in the same way [as Instagram].

We use Instagram [Stories] extensively. It’s our way of letting people know what [product] comes in, immediately. For example, [on Wednesday] we had a Chanel XXL Classic Flap Bag come in. The style was carried by all the fashion influencers this year. We posted, ‘This is dropping this afternoon.’ The minute [that post] went up — we didn’t even have time to post [an in-feed image of] it — someone contacted us to buy it.

During lockdown, our sales were booming. And one factor playing into that was that people were sitting at home. Instagram became their form of entertainment.

Instagram obviously has a lot of functionality — you can create an Instagram Shop, and people can find you through that Shop. That’s actually not something that we use, because it’s quite clunky on the backend. We have a very simple formula.

Stuff comes in every day, and we have different [go-to] models of different sizes, different styles — we have a huge audience, and most everyone has their favorite girl. On any one day, one girl will come in and she’ll start taking you through the new products of the day. It might be a bag, or maybe a little Chanel jacket just came in. She’ll put it on and explain how to style it, and she’ll show you the condition. It’s almost like you’re with a friend, and they’re showing you these amazing things and explaining why they’re so amazing. People will then swipe up, and it takes them to the website to buy it.

Our followers are very engaged. When we get a fake, we’ll post it on Instagram and label it ‘Fake of the Week,’ and explain why it’s a fake. We’ll say things like, ‘Burn it.’ People are so fascinated by the fakes — they think it’s exciting to know how to spot them, like playing Sherlock Holmes.”

Why Farfetch’s “store of the future” is a fit for the present.

Half of brand and retail workers are worried about their mental health.

Social platforms are rolling out commerce features by the droves.

No, the Yeezy Gap coat didn’t sell out.

Fashion is already post-gender on TikTok.