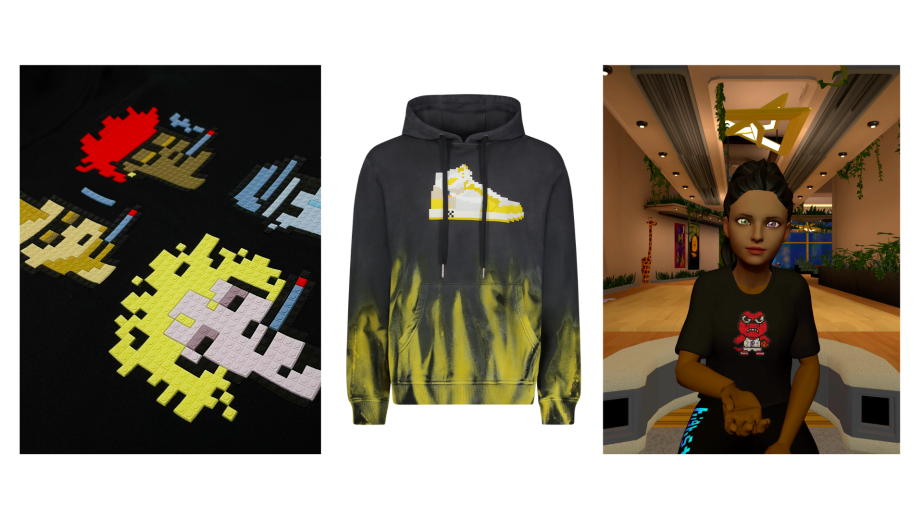 Creating a fashion brand for the web3 customer

Many people in tech and web3 have felt dismissed by fashion, with TikTok views meaning more for luxury brands than creating apps and trading millions in crypto. But a metaverse-integrated brand with tech consumers in mind has just come to market.

Jonathan Koon, former designer of Vancouver-based menswear brand Private Stock, has created a physical fashion brand that “lives and breathes” through the eyes of a modern-day tech kid, according to Koon. On Monday, Koon released The Mostly Heard Rarely Seen 8-Bit (MHRS 8-Bit) collection, a spinoff of the MHRS main line that launched in 2015. The new collection was created in collaboration with retail metaverse gaming platform Highstreet and has been on Koon’s mind since his days at Private Stock in 2013. Each item in the MHRS 8-Bit collection of hoodies, hats and T-shirts comes with a QR code granting the consumer an NFT version of the item, It also comes with an eight-step path to establishing a presence on Highstreet. The collection is one of the first metaverse-linked streetwear collections that will be carried by luxury retailers, including Saks Fifth Avenue, Neiman Marcus, Selfridges, Harvey Nichols, Beymen, Bloomingdale’s and Farfetch.

When Koon asked his biggest customer, a web guy who remained anonymous, why tech guys only wear one thing, he said, “A DJ or a rapper can get a couple hundred thousand views on YouTube, and they’re invited to Gucci’s next runway show. A tech guy can make $100 million trading crypto or create a new application, and Gucci won’t know his or her first name, so why bother wearing a designer [branded] item?,” according to Koon.

Thus, the entrepreneur saw an opportunity to develop a brand with tech consumers in mind. Koon had previously worked with artistic director André Leon Talley at Amazon-owned Zappos in 2014, in the retailer’s early attempts to sell luxury brands on the internet. In his role as a consultant, he said he also encouraged JD.com, China’s largest retailer, to bring key opinion leaders to luxury fashion shows in China, a feature that is now a mainstay for the fashion world.

Koon and his co-founder, Thomas “Tomikara” Li, have been working on MHRS 8-Bit for four years to make sure its coding and aesthetic matched that of its core consumer, the web3 tech native. The main MHRS brand has been stocked by retail partners since 2015, allowing for a smooth adoption of MHRS 8-Bit among major retailers. Koon is planning to expand the 8-Bit brand with two annual collections and to release mini NFT phygital drops throughout the year.

“For those in the tech space, it’s simple: When they make money, why would they go and consume and support something that never really cared about them?” said Koon. He gave the example of Lululemon and Patagonia, which have come to represent the ethos of the tech community through their functional design and Silicon Valley marketing. Because of that synergy, they were able to build out significant business opportunities, Koon said. As the 8-Bit project focuses on scarcity and exclusivity with its phygital items, it remains native to web3 users.

Luxury brands like Gucci have been pivoting slowly to address this group of tech users after the NFT boom late last year, but have received criticism from web3 natives for not feeling native enough. Gucci has been working on creating the 10KTF collaboration with digital artist wagmi-san, giving users access to unique profile picture (PFP) NFT’s and physical items. 9dcc fashion brand from web3 investor Gmoney, meanwhile, is aiming to fill that gap, but Koon has a younger, fashion-forward mentality that links web3 to Off-White-style customization strategies.

Jenny Guo, co-founder of Highstreet, said the retailer integration is a key stepping stone for traditional fashion customers to engage with collectible and tradeable fashion items. “With this launch, we want to allow consumers to experience the energy and new possibilities of web3 culture, without needing to already possess the complex knowledge of navigating web3 tech,” she said.