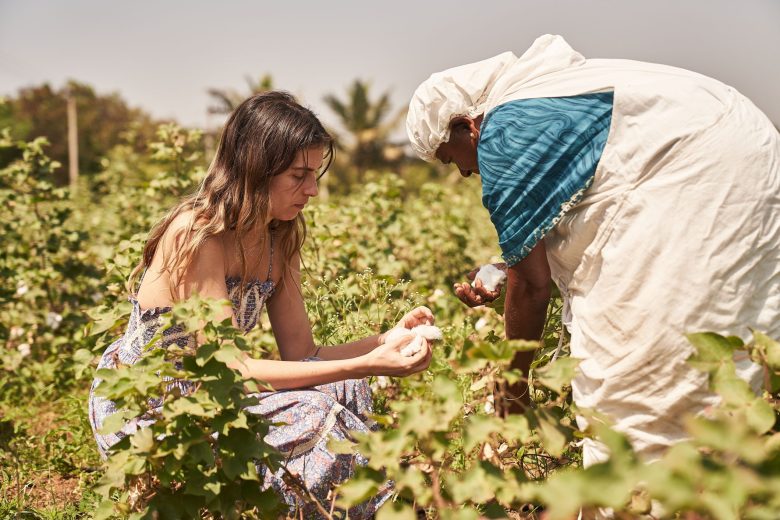 For many brands, returning to its roots is all about design aesthetics and coming back to shoppers with a redefined vision. But with land stewardship, returning to one’s roots is all about involving the consumer in a company’s sustainability journey. Womenswear brand Christy Dawn is doing exactly that, launching a program where consumers can invest in future materials.

Christy Dawn was started about seven years ago by Christy Dawn and Aras Baskauskas. Dawn acts as the head of creative and Aras is the brand’s CEO. When they started the company, Dawn had been working as a model and buying vintage items. After being invested in vintage fashion, she decided that she wanted to start her own project. The duo started buying deadstock fabric from downtown LA, because that was one way they could keep orders small, not adhering to 1,000 piece order minimums. What started with a really small amount of dresses has consistently sold out over the years and from this, the company was able to grow its stock model.

About three years ago, the founders noted how the stock they were buying was still leftovers from a toxic industry. They believed that even though it wasn’t necessarily harming or causing harm, it wasn’t creating a solution. They wanted to use the community they built around deadstock and sustainable fashion to make a bigger, more positive impact in the industry. That is where their unique take on regenerative farming came in.

Dawn and Baskauskas were particularly focused on the instability of the supply chain and how the lack of trust between partners along the supply chain leads to exploitation and overwork. Many of the farming practices used in the production of materials, such as the use of chemical pesticides, aim to make the fiber yield as consistent as possible. Christy Dawn’s head of regenerative practices Mairin Wilson was brought in to build this trust with a regenerative fiber farm and supplier for the brand’s Farm to Closet collection, launched earlier this year in May. The duo wouldn’t use chemicals and would maintain a cooperative dialogue between the brand and a farm.

Christy Dawn started working directly with the farmers and artisans at Oshadi Collective, a seed-to-sew design collective to replenish the soil in a depleted area in Erode, India. In August 2019, the brand put the seeds in for 40 acres of regenerative cotton, which has now grown to 105 acres. Since its launch, the cooperation has been making the soil better, growing cotton without chemicals and intensive tilling, while also making sure farmers get paid.

The land stewardship program within the Farm to Closet collection goes one step further. Launched in September, it also allows the consumer to invest in the cotton-growing practices at the Oshadi Collective farm. For an investment of $200, equal to that of a mid-range dress, the customer covers the cost of farming cotton regeneratively on 3,485 sq ft of land, paying farmers upfront for their costs and wages, as opposed to after the yield is harvested and calculated.

Wilson said, “A lot of these brands that are trying to change their practices still say that they will buy the yield after it is harvested. If the farmers’ methods fail, they’re still bearing the burden of working with nature. Farmers will still want to get a good deal, so they will try to get a higher yield in other ways. It’s not as supportive and regenerative as you would think.”

At the last tally over the last two years, the brand has drawn down 66 tons of carbon into the soil, making it a valuable contributor to regenerating parts of the arid areas in the region. From its data, Christy Dawn has managed to get a higher yield of cotton, sequester more carbon than it expected and build a trusted network with farmers that know they won’t be scraping by if they have a bad season.

“It was amazing to get to know the farmers and hear their ideas for community farming. One corner of the farm was having a ton of yield and then in the other corner, it was really struggling.” Wilson said. The farmers used what they had learned from past generations to create a nutrient tea from a bag of rice. The tea, which spread into the drip irrigation across the rest of the farm, was able to bring back areas that had previously struggled with growth.

Regenerative farming has been gaining momentum in fashion, as more brands became aware of the impact of farming fiber has on the soil in particular. According to the cotton report by the Transformers Organisation, an NGO working within the denim industry, “cotton is 80% of the natural fiber market and is the second most-commonly produced fiber after polyester, accounting for 24.2% of global fiber production as of 2020.”

Wilson said, “Overall, I think so much of the fashion industry right now is a negative feedback loop where in order for one person to win, someone has to lose. In order for a brand to make money, they have to extract from the people sewing their dresses. In order for the cotton to have a high yield, you need to kill the soil around it for a long-term yield. But we can definitely create a positive feedback loop.”