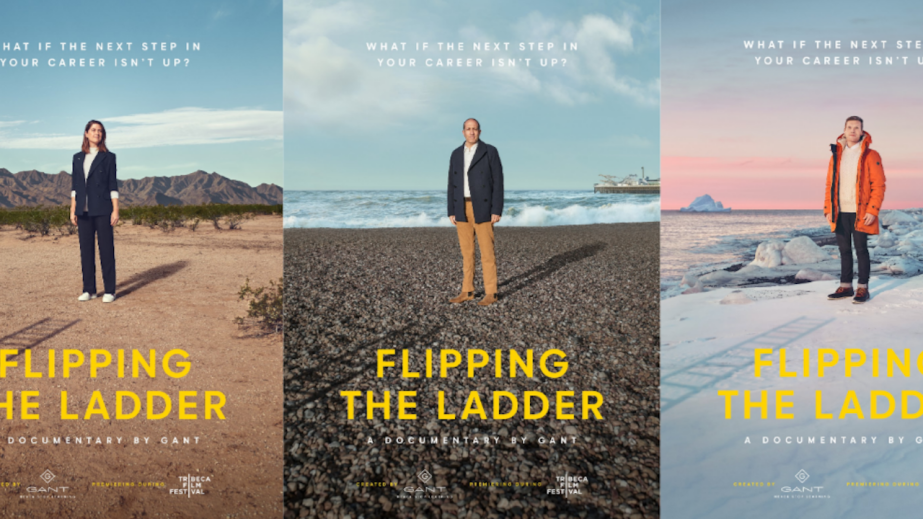 Following its first experiment in TV production, via a web series with talk-show host Craig Ferguson in late 2017, Gant has produced a feature length documentary film, which explores why people are making drastic career changes.

Unlike most content created by brands, the documentary, which is called “Flipping the Ladder” and features narration by Rashida Jones, has almost no visible branding or brand messaging. Aside from the credits at the beginning showing that Gant produced the film, the brand has no presence whatsoever. This was an important decision the brand made early on.

“We want the content to stand for itself,” said Eleonore Säll, global marketing director for Gant. “We are not ashamed of it; we don’t hide it — we proudly say it was created by Gant. We do not underestimate the audience. They know this is produced by us, that it’s sponsored.”

Säll said that the goal for this project was to create content value for the consumer that’s separate from their relationship with the brand. Gant considers its previous production effort, YouTube series “Couple Thinkers” starring Craig Ferguson, to be a massive success, due to the strength of the content. It was marketed on the brand’s social media platforms, mostly on Instagram, and showcased Ferguson as the face of the brand. The first episode has more than 1.5 million views on YouTube. The show is also hosted on the brand’s website, and links embedded within each YouTube video direct viewers to Gant’s site, as well.

Brands producing documentaries is nothing new. Last year, Chanel unveiled plans to co-produce a documentary for Netflix. However, unlike Gant, the Chanel documentary was about the company itself.

“I think the common line here with a lot of fashion brand-produced films is that fashion shows are losing relevance, so there has to be other ways for these brands to engage people,” said Richie Siegel, founder and lead analyst at retail consultancy Loose Threads. “I applaud that they are trying something new, but I think the real question is how the distribution model will play out.”

Gant believes the appeal of the film is that the career focus is relatable to every segment of the brand’s audience.

“We sell in 70 countries,” Säll said. “In some countries, we focus mostly on men’s. In other countries, it’s more women’s. But this is something that’s applicable across the globe. Big brands are becoming important parts of people’s lives.”

In 2017, Gant’s CEO Patrik Nilsson told Glossy that the brand was in the midst of rebranding, calling its new strategies “Gant 3.0.” Nilsson wanted to modernize the brand, so he cut the brand’s product assortment by 60 percent and refocused the aesthetic to “tech prep” along with making sustainability a more important brand pillar. Not long after that, the show with Craig Ferguson launched as part of that rebranding effort. Gant would not give specific earnings figures or annual sales.

“While some brands are embracing content in innovative ways, most are reluctant to break from the advertising pack – even if that pack is riding off a cliff,” said Anthony Cospito, head of strategy at Moving Image & Content. “Given the rise of ad blockers, cord cutters, and ineffectiveness of interruption-based advertising, brands need a smarter solution. Considering Netflix will spend an estimated $15 billion on content production in 2019, and P&G is expected to spend almost half that amount on advertising alone, the budgets are there for a test and learn approach. If brands took even a small portion of their spend and created original, compelling content their customers love, the boost to brand awareness, brand consideration and brand trust would be something worth watching.”

The film is scheduled to debut at this year’s Tribeca Film Festival on May 2. After that, it will be live on Gant’s YouTube page, where the brand said it has had the most success with video engagement, due in part to the tools and support YouTube offers for connecting with users who watch the film. According to Säll, YouTube gave the brand a more directly engaged audience, thanks to its comments system (which most major streaming platforms do not have), and better behind-the-scenes data tools, though she did not elaborate on the viewer data the brand was given.

“We released the Craig Ferguson show on YouTube, and it was amazing for us,” Säll said. “For this one, we could have done a big streaming deal, but we didn’t want it to be an exclusive. So we are going to release it on YouTube. We have a great relationship with them and we were really happy with them as a partner.”