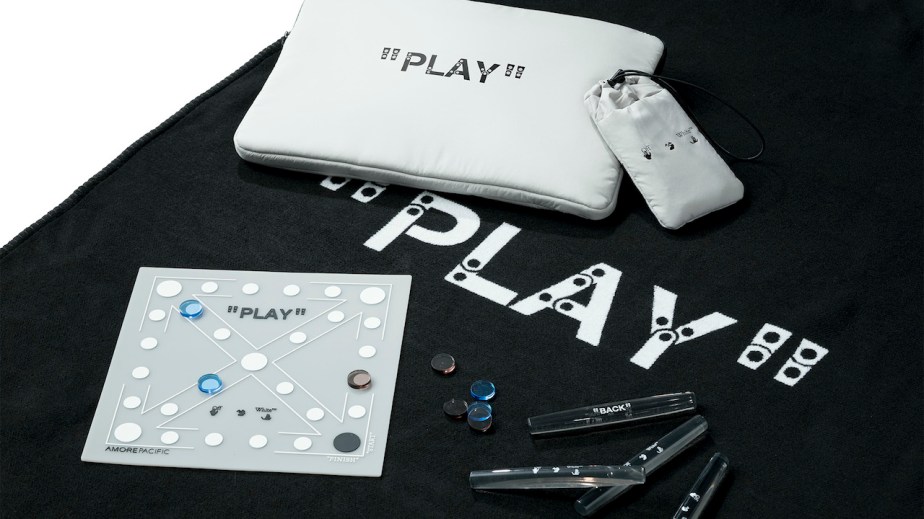 On March 1, Off-White and luxury K-beauty brand Amorepacific launched their “Protection Box” set in China and Japan, after first debuting it in South Korea on February 1. The global streetwear and beauty worlds have embraced collabs, but there’s an especially large opportunity with Asia’s young streetwear-obsessed consumers.

Featuring a logoed Off-White face mask, sheet masks, an air cushion sunscreen and a lip balm in a special-edition box, the set was sold in China through Alibaba’s Tmall Global and in Japan vie e-commerce marketplace Qoo10. In Korea, it was launched on Amorepacific’s online Amorepacific Mall website, on the Naver Shopping platform and at major flagship stores, including the Amore Store at the brand’s headquarters, Amore Seongsu and Amore Gwanggyo. In-store, Off-White’s interpretation of the traditional Korean game Yunnori was also available. Priced at approximately $171.70, access to buy was provided via a random draw system.

Unlike other major beauty streetwear collabs like Supreme and Pat McGrath, this collaboration is focused exclusively on Asia. “There are no plans for the product to be taken to further markets other than those of Korea, China and Japan,” according to an Amorepacific spokesperson.

“The product selection for this collaboration may already indicate that it is primarily targeting the Asia market, as sheet masks and cushions are more popular among consumers in that region,” said Ying Mu, gm at consultancy Labbrand. She added that the cushion compact–a product that’s ubiquitous in South Korea but rare in the U.S.–is treated as a “status symbol” in Asia for women. “They’ll not only use this product at home, but they’ll actually bring it to social settings, as well, for touch-ups or as a conversation starter.”

Known for sophisticated branding, anti-aging products and a luxury price point, Amorepacific is focused on expanding its appeal to Gen Z with this collaboration, according to a brand spokesperson. They noted that the brand hopes “this becomes a chance for those who were previously not so familiar with us to learn about our brand.” According to Mu, the luxury beauty segment’s “core target consumers in Asia are at least 5-10 years younger than its demographic profiles in North America or Europe.”

“Streetwear is very big in China, and even when shoppers buy from traditional luxury brands, they gravitate toward the more streetwear-style type of products,” said Iris Chan, partner at digital marketing agency Digital Luxury Group. “This is a reflection of the personal and more expressive consumption that’s keen among Gen Z and millennials.”

“Collaborating with streetwear brands is still a very ‘hot’ thing in the market right now,” said Mu. Luxury fashion brands’ collaborations, such as Dior’s capsule collection with Shawn Stüssy for Chinese New Year 2021 or Off-White’s collaborations with luxury brands, have been especially popular in China. Off-White officially launched in the China market for the first time when it created a collaboration with WeChat in December 2020.

Like many successful Off-White collabs, the Amorepacific set is being sold at a markup on resale platforms. On Grailed, it is going for $500.

This isn’t the first streetwear-style beauty collaboration that has gone over well in China. While the Supreme PatMcGrath lipstick was not available in China, “the Travis Scott and Byredo Space Rage perfume was well-received” in the country, said Chan. “The brand held events in Beijing and Shanghai, with shoppers having to take queue numbers ahead of time, online, for a chance to buy the product. It helped that Byredo was a brand that already had a very strong brand equity in China and is very popular with consumers.”

Beyond Off-White, Mu mentioned that “Supreme, Stüssy and Palace are the more established and strong favorites for Asia,” among international streetwear brands. She also noted that Asian streetwear labels including South Korean brand Ader Error and Chinese label Li-Ning are popular. Fear of God’s Essentials diffusion line has also become a hit with China’s Gen Z.

“After seeing the recent collaboration trends among the brands, we are now expecting to see even greater diversity, in terms of inter-industry attempts,” said the Amorepacific spokesperson. “We, as a beauty company, are open to collaboration opportunities with various lifestyle brands besides those in the fashion industry, which would provide other effective channels for us to communicate our values.”