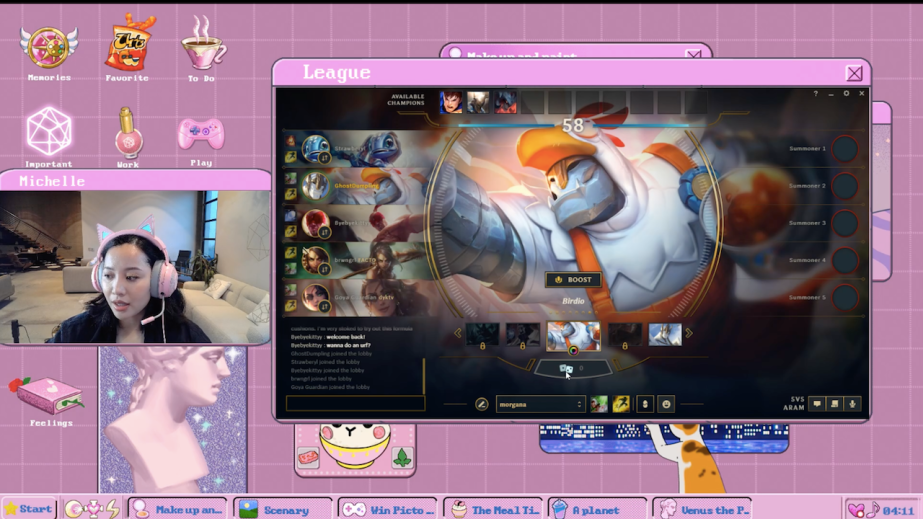 Beauty influencer and Em Cosmetics founder Michelle Phan may have nearly 9 million followers on YouTube, but there’s another video platform that she watches constantly: Twitch.

“I have Twitch on pretty much every day,” she said. “I like to watch it and leave it on in the background while I’m sleeping.” She may be most known for her makeup tutorials and product reviews, but she’s also an avid gamer — she plays daily. “League of Legends” is her favorite, and during quarantine, she’s also gotten into “The Legend of Zelda: Breath of the Wild.”

Last week, she decided to merge the worlds of gaming and beauty when she hosted a livestream on the platform to play “League of Legends” with her fans while promoting Em Cosmetics’ new Daydream Cushion foundation launch. During the livestream, she programmed a bot to add links-to-purchase to the chat, while a commercial for the foundation played during breaks in the game.

“The reason I wanted to do Twitch was because I wanted to interact with my audience in a different way, where it wasn’t just them chatting,” said Phan. The event was successful at driving sales: Daydream Cushion sold 278% more units on launch day, compared to previous launches. Seventeen percent of Em Cosmetics’ revenue and 45% of its site traffic for the day was generated during the roughly three-and-a-half-hour livestream. The promoted cushion accounted for 46% of the purchases bought during the livestream.

From Burberry’s recent livestreamed fashion show in September to Congresswoman Alexandria Ocasio-Cortez’s massively popular game session last week, Twitch’s over 17.5 million daily active users are gaining growing attention from companies beyond the gaming world. This interest has grown more quickly during the pandemic as both gaming and livestreaming consumption have surged worldwide.

Phan is one of Twitch’s early adopters among beauty influencers and brands, but the list is growing. Before the pandemic, a few beauty brands started to experiment with Twitch: Both MAC Cosmetics and Maybelline were involved with TwitchCon in September 2019. MAC sponsored a booth at the annual event, while Maybelline enlisted top streamers to host “get ready with me” livestreams using the brand’s products with links to purchase.

“As viewers spent more time at home in 2020, we saw an increase not only in engagement on the service, but also in the diversity of content,” said Twitch’s head of sales for the Americas, Sarah Looss. She noted that non-gaming content on Twitch has quadrupled over the past three years, and content in the “beauty” and “body art” categories increased 208% from November 2019 to August 2020.

Recently, Hero Cosmetics enlisted prominent Twitch gaming streamer Seum to promote its products by doing a skin-care routine and wearing its acne patches while live-streaming a game. The brand’s return on ad spend (ROAS) for the promotion was 150%, said Hero Cosmetics co-founder and CEO Ju Rhyu. She noted that the laid-back livestream format provides a sense of authenticity that can be hard for brands to achieve on other platforms.

“Instagram can be so staged,” she said. But Twitch is “almost more natural because it’s streaming video, and people can talk about the product in a more authentic way,” she added. “There is more of a realness to the platform and the content itself.”

Other beauty influencers active on Twitch include James Charles, who has 140,000 followers on the platform and also hosted a gaming livestream last week. While Charles’ event was pure gaming, other influencers are mixing in beauty content. TikTok skin-care influencer Young Yuh, for example, streams on Twitch 2-4 times a week to answer skin-care questions from his audience.

Twitch is “definitely a much better alternative to IG Live or TikTok Live, as you can barely do anything to interact with your audience, nor can you really read the comments well as they just zoom past you” on these other platforms, said Yuh.

Twitch influencer Alexys Fleming (MadeYewLook), meanwhile, has amassed over 68,000 followers on the platform by showing her body-paint creations while gaming. She also sells her own line of makeup online.

Twitch streams offer a higher level of interactivity with fans than other platforms, which Phan said makes it a fitting alternative to in-person events during the pandemic.

“Before Covid, I would have meet-and-greets in New York or L.A.,” said Phan. “When you have events like this, where anyone in the world can watch and interact, it has a bigger umbrella where you can interact with more people, and it’s not based on location or time zone.”

But, like any less commercialized platform with a dedicated community, brands working to break into the Twitch world need to know what they’re doing.

“If there’s any advice I could give to any brands, it’s that if you don’t really understand the platform, don’t be on it,” said Phan. “Twitch is a very unique platform where you have to have the right audience and the right person streaming, [in order] for it to be successful.”