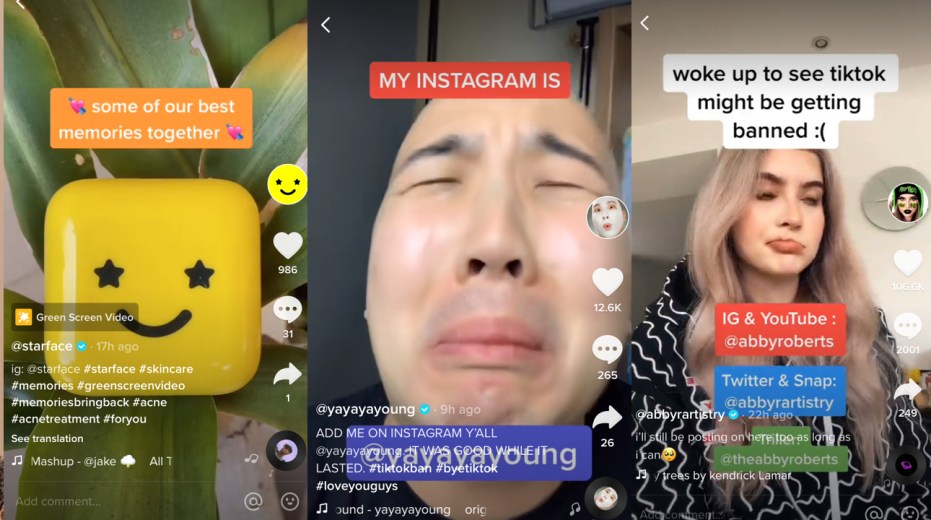 TikTok vs. Instagram: Skinfluencer Young Yuh on why ‘Reels could use a lot of work’

Skinfluencer Young Yuh, who has more than 900,000 TikTok followers via his account @yayayayoung (the name was inspired by his childhood stutter), joined Glossy senior reporter Liz Flora on Thursday for a discussion on Instagram Live.

Logging on from his L.A. home, Yuh shared his thoughts on the potential TikTok ban, his reviews of the platform’s competitors and his best advice for building a TikTok following.

First and foremost, he said, be original. “You can only go so far by copying other people’s content,” said Yuh.

Highlights from the conversation, which have been lightly edited for clarity, are below. To view the full conversation, head to @Glossyco’s IGTV.

On the potential TikTok ban in the U.S.:
“When I first [heard about it], I kind of called their bluff, because, if they’re really going to ban something as huge as TikTok in the U.S., there are going to be protests and outcries all over the world. There’s no way they’re going to just ban it; it has to be something in the works — something where they let us know ahead of time. And then when Trump said he was going to sign the executive order to ban TikTok, that’s when I started freaking out and taking it more seriously. Because everyone knows Trump just sort of does what he wants, and if that’s what he wants to do, then it’ll happen. That’s why I made that [TikTok] post saying, ‘I don’t want to lose you guys. Follow me on Instagram, follow me on YouTube.’ I [immediately] got, like, 20,000 new Instagram followers. But [now,] it seems like nothing’s really happening. I feel like Trump and the whole TikTok ban is the boy who cried wolf. If it happens, it happens; if it doesn’t, I’m still here.”

Sizing up Byte, Triller and Reels:
“I’ve tried Triller and Byte. They’re catching on and implementing a lot of TikTok stuff, but it still … it’s not at that level. And TikTok has that community; that’s the most important thing, for me. The TikTok community is very engaging and very welcoming of each other, and the conversations are endless. And now, I’m trying to go more into IG Reels, because it is the direct TikTok competitor, and I feel like I’m doing pretty well on there, too. It’s not as massive as TikTok, and, of course the content restriction of 15 seconds is a huge restriction for me. Most people know that my content is [usually] 60 seconds. Cutting it down to 15 seconds [for Reels] is pretty difficult. But I’m trying to be more hopeful, because TikTok used to be limited to 15 seconds, too. Who knows? Maybe IG Reels will [go beyond] 15 seconds.”

Instagram Reels’ shortcomings:
“In terms of the interface, IG Reels could use a lot of work; it’s basically in its infancy. Whenever I try to comment on multiple posts, [the comments section] is very small, so scrolling to the next comment is very difficult. And in terms of finding specific pages or the type of content that I like, it’s very difficult on IG Reels. The type of content that’s being suggested to me on my exploration page for IG Reels is super random; it’s very different from the suggestions on my TikTok ‘For You’ page. IG needs [to put] a lot of work into that, too.”

TikTok’s influence on beauty:
“Skin care on Instagram has become a glorified, luxury, pretty kind of thing. A lot of people are close-minded on Instagram, when it comes to skin-care routines and [skin] issues. But the huge, welcoming environment of TikTok has been bleeding into every other social platform. So on TikTok, people are so accepting, very welcoming of other people’s routines; they’re starting to understand that there are different routines, and what works for me may not work for other people. That type of open-mindedness and open conversation is what I love about TikTok, and I hope it continues spreading to other platforms.”