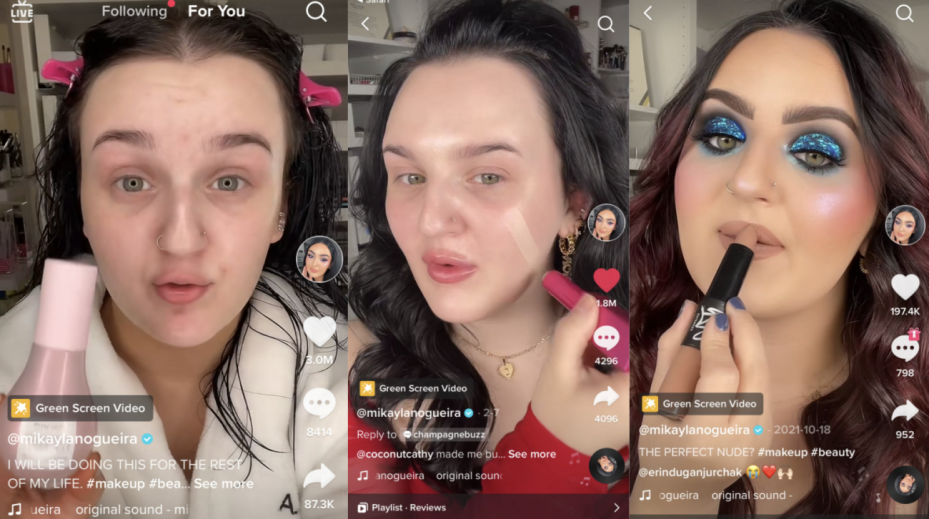 Glossy Pop Newsletter: Mikayla Nogueira is 23, and the most powerful influencer in beauty

We’ve talked about Mikayla Nogueira before. She was one of the first-ever influencers to earn a spot on Glossy 50, and since her feature, Nogueira’s influence and power within the industry have continued to grow. And given that Nogueira’s influencer career is just two years old, it’s safe to say she’s just getting started.

I’ve written about many viral products on TikTok, and in nearly every story, there are examples of how Nogueira played a part in the virality. When a product is getting attention on TikTok, TikTokers flood the comment sections of posts and tag Nogueira, desperate for her take. Sometimes she discovers products herself, while at other times, she stitches another creator and responds with her take on a product generating buzz. Whichever route she chooses, when she professes her love for a product, its brand strikes gold.

There are countless examples, but I spoke to three brands that have benefited from “The Mikayla Effect,” as Glossy Pop is hereby dubbing it. We discussed how her TikToks have had an unparalleled impact on their sales. We also spoke with Nogueira herself about how she became a beauty brand’s fastest ticket to virality, and sales.

Basma Beauty’s viral product The Foundation Stick, which comes in 40 shades, launched less than a year ago in May 2021. Then, on February 7, Nogueira stitched TikToker @coconutcathy’s (Cathy Nguyen, 332,000 followers) video about Basma’s foundation stick, in which Nguyen noted Kourtney Kardashian was “spotted wearing this foundation.” Nogueira said the brand claims to have a perfect match for everyone, which is hard for her to find.

The results from the stiched video were instantaneous. “We had over 1,200 orders in less than 12 hours,” said Parisa Durrani, co-founder of Basma. Initially, she said, the brand focused on Instagram marketing, but it wound up shifting its efforts to TikTok when Facebook continually disabled its account due to alleged profanity and “illegal matters,” which Durrani denied existed.

“We started aggressively gifting content creators on Tik Tok. We knew that, as soon as there’s a hashtag #ad in a caption, we lose all credibility. Foundation is so tricky. People want to hear honest opinions and they want to see what it looks like,” Durrani said. A month after Nogueira’s post, Basma had gained over 30,000 followers on TikTok. The brand now has over 55,000 followers, thanks to the boost.

Even before Nogueira had the mindblowing 11.4 million followers on TikTok that she has today, she seemed to have a secret sauce. The product sell-outs started happening after her third-ever TikTok video.

Anyone who knows Nogueira, speaks about Nogueira or hypothesizes about why she’s become the mega-influencer she is today mentions her humility and the way her content makes her followers feel like she’s talking to a friend. All of these things are true, but two years in, even she can no longer deny her prowess as an influencer and a saleswoman.

“Any beauty influencer can create a video and have the potential of it going viral and selling something out. But for me, I noticed that even from when I began my TikTok in 2020, I’ve held that, I guess, power the entire time. And it’s something we don’t see very often from beauty content creators,” she said. “Not only can I post a video, and it goes viral and sells out the product or boosts a brand. But I can also see when someone else posts a video and a product goes viral, because the comments section is filled with tags of my username. To me, it goes along with this idea of trust.”

She added, “I am so candid on camera and very conversational. I try to make people feel like they’re sitting with a friend while they watch my videos. That creates this bond between me and the viewer. I’m not just any beauty content creator, I’m their friend. And they feel they can come to me for something beauty-related, and it’s really powerful.”

I have interviewed Nogueira several times in the past year, and this was by far the most she has ever taken ownership of this power.

CTZN Cosmetics can also attest to “The Mikayla Effect.” Last October, Nogueira stitched TikToker Erin Dugan Jurchak’s (@erinduganjurchak, 2.2 million followers) post about the indie makeup brand and its wide range of nude lipsticks. Aleena Khan, co-founder and head of marketing at CTZN, commented on how detailed Nogueira’s post was. In the video, Nogueira takes her time explaining the brand’s Get Matched quiz and how it helps customers select the perfect nude based on their skin tone and preferences. It asks, for example, if you prefer a nude lip that exactly matches your natural skin color or prefer to go a shade darker or lighter. After Nogueira’s post, CTZN’s website experienced such an extreme surge in traffic that users complained of it crashing, Khan said it was just delayed.

“Everyone is obsessed with her because she’s authentic. That sounds generic, but it’s truly the way she speaks — and even swears in the video. The first thing she says is, ‘This is fucking genius.’ So you already can tell, ‘OK, it feels like I’m talking to a friend.’ And then it’s the fact that she took time to actually walk people through the quiz and try on products. Usually, when not paid, it would take a miracle to have someone with her following make the effort to go to our quiz and apply the shades. It’s the extra mile she goes to explain: ‘This quiz is really easy. It has three simple steps.’ She includes the extra information that usually unpaid influencer posts just do not include,” Khan said.

Nogueira has also organically posted about Glow Recipe throughout her career, but as the brand has grown, it has made her an official partner. In March 2021, Nogueira stitched TikToker @Glamzilla (1.4 million followers) demonstrating the glowy impact that two Glow Recipe products had on her skin, both used as makeup prep. The products were the brand’s Watermelon Glow PHA + BHA Pore-Tight Toner and Watermelon Glow Niacinamide Dew Drops.

“We were just looking through the comments, and they were all so positive because she truly engages with the community in a way where it’s so authentic. She speaks her mind,” said Glow Recipe co-founder Christine Chang. Authenticity aside, the results speak for themselves. “We saw a 600% spike on our DTC site alone. And then in Sephora, we sold out multiple times after she posted.” Dew Drops remains the brand’s bestseller and became a $10 million single SKU after the virality and first partnership with Nogueira.

“It was a Saturday, and we got a phone call from our e-commerce director and then from our Sephora merchant — they were just wondering what was going on, because the traffic and the conversions were like nothing they’d seen before,” said Chang’s co-founder Sarah Lee. “She broke all records for us. We were genuinely shocked.”

Since then, Chang and Lee have formalized their relationship with Nogueira. On March 23, they released the Glow Essentials by Mikayla Kit ($48). It was the No. 1 skin-care set on Sephora.com the day it launched.

After the Basma post went viral, Durrani and her co-founder gifted Nogueira a Cartier bracelet, which Nogueira thanked them for in another post.

“I never film a video with the intention that it’s gonna get a shit ton of views or go viral and sell out. I film it with the mindset of, ‘Oh, I freaking love this product. I think this is really cool. I want to show this to my audience.’ And I think that is such a big reason why a lot of my videos do go viral, because I create them with a sense of genuineness and authenticity that a lot of people crave,” Nogueira said. “I just feel like extremely privileged. I feel extremely blessed and extremely grateful that I have 11 million people who have my back,” she said.

For Durrani’s part, the gratitude is mutual, “We were like, holy shit. There’s no way we could pay a celebrity. We would not have gotten the authentic traction and organic growth that we did with Mikayla. And honestly, if we could give her more, we would,” she said.

E.l.f.’s viral collaboration with Chipotle proved the current mania surrounding well-done food-beauty collabs. It also showed the affordable beauty brand’s fans love for kitschy, limited-edition collections. And since just about everybody loves Dunkin’, this coffee- and donut-inspired makeup collection will likely prove just as much of a hit. It includes a makeup sponge designed like a strawberry-frosted donut and a coffee-flavored lip scrub.

Glossy Influencer Index: A brand guide to the Instagram influencers worth partnering with

What Ulta Beauty is looking for in up-and-coming brands