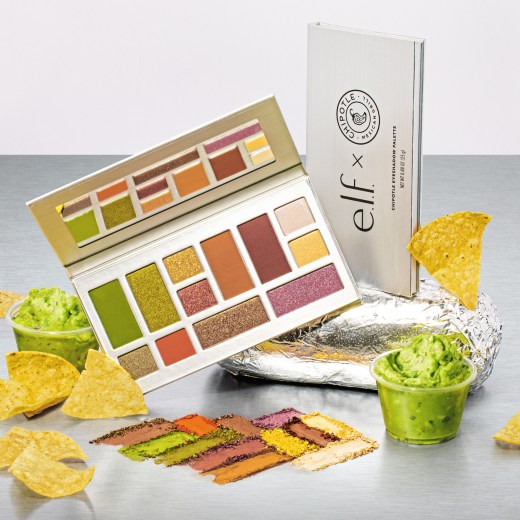 For E.l.f. and Hipdot, food collaborations are proving successful

The idea of an eyeshadow palette inspired by Easter candy, or a chain restaurant known for its burritos, may seem strange. But for digitally savvy brands like E.l.f. and Hipdot, working with iconic food brands is proving extremely successful — both with regard to sales and social engagement.

First, there was Tapatio. In October 2020, Hipdot introduced a collaboration with the hot sauce company. “We try to be all about the unexpected,” said Jeff Sellinger, founder of Hipdot. “When you look at something like Tapatio, it’s a cult classic. It’s got such a dedicated and passionate fan base — people carry bottles of it around with them.”

That fan base, it turned out, also wanted pepper-infused lip glosses and Tapatio-inspired eyeshadow palettes. The Instagram post announcing the collaboration received the second-highest engagement of any of the brand’s posts. According to Tribe Dynamics, mentions of #Tapatio generated $193,000 EMV for HipDot from 16 influencers across 27 posts in October 2020.

E.l.f. introduced its first collaboration with Chipotle in May 2020 — it sold out in four minutes. The fervor was intense: “There were consumers that were calling our customer service and crying when we sold out,” said Gayitri Budhraja, E.l.f. vice president of brand. That first collaboration came together in just about three weeks, Budhraja said. It was a burrito-inspired collection with existing E.l.f. products in Chipotle-inspired hues. The kit itself came in a co-branded case that mimicked a foil-wrapped burrito.

The partnership came about as a result of TikTok. In 2019, E.l.f. launched its eyes lips face campaign on TikTok, which quickly became the largest-ever marketing campaign on platform, based on views. At that point, Budhraja said, there weren’t many brands creating on TikTok. In fact, she said, the only other brand making waves on the platform was Chipotle. As a result, the idea of collaborating felt natural, Budharaja said. It stemmed from the alignment of values and goals between the two brands: “The [idea] was, ‘Let’s figure out how to force multiply with another like-minded, spirited disrupter.’ Both of us are very Gen Z-focused. Both brands have a cultural following. We also knew that both brands are digital disruptors.”

Seeing the success of the collaboration, the two brands decided to do another, larger and more involved collaboration, which launched in March. This collection also had its roots in social media culture. “There were memes going around, where people were looking at the Chipotle service tray and making comparisons to eyeshadow palettes,” Budhraja said. So, that served as inspiration for the resulting eyeshadow palette the two brands created.

These collaborations, which hinge on a more playful side of beauty and makeup, feel timely, especially in a global moment where levity is appreciated wherever it can be found. Case in point: E.l.f. and Chipotle’s sponge duo, made to look like an avocado, proved a huge hit, as has the set of sponges Hipdot created with Peeps in March. The latter marked Hipdot’s second food-related collaboration and was timed to launch ahead of Easter. The collaboration also included a makeup collection, which was complemented with apparel merch, too.

Hipdot’s latest food collaboration, a collection of neutral-toned makeup with Reese’s, launched on Thursday. The collection appeals to the senses on even more levels than the previous ones. The products come packaged in foil-esque wrapping reminiscent of the iconic candy’s packaging — and they even smell like Reese’s.

In reflecting on the success of these collaborations, all of which have coincided with the chaotic, “unprecedented times” we’ve all been living through, it seems a sense of humor has made for a welcome addition to customers’ makeup bags.

“One trend that we’ve observed in beauty overall over the past year is that creativity and humor are playing an increased role in influencer content, especially content from Gen Z creators,” said Tribe Dynamics co-founder and president, Conor Begley. “Influencers are moving away from the filtered, aspirational aesthetic previously popular on Instagram, and taking a more playful approach to makeup and content creation overall.”

And a more lighthearted approach pairs well with an avocado-inspired blending sponge.