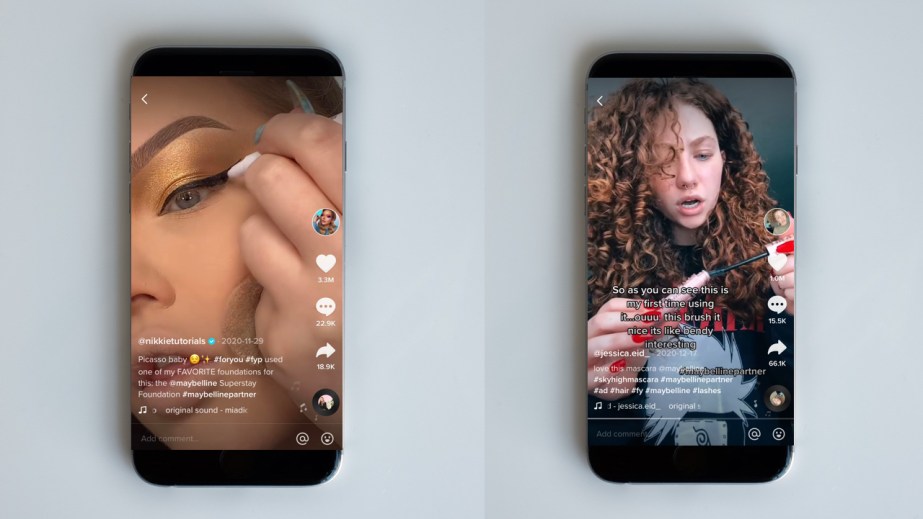 When it comes to Gen Z’s favorite beauty brands, a new report finds that accessible drugstore names top the list.

Conducted between May 2021 and June 2021, the report found that Maybelline had kept its spot as the No. 1 makeup brand among respondents since 2019, gaining percentage points in 2021. According to Marnie Levan, Maybelline’s vp for integrated consumer communications, the brand’s success with Gen Z comes from its investment in relevant influencer and celebrity marketing on top Gen-Z social channels.

Maybelline especially benefited from the mascara category, which the Kyra report found was the most important makeup product for the Gen Z respondents — one-third said they could not go without mascara in their makeup collection. Maybelline’s Sky High mascara sold out four times at Ulta Beauty as a result of the brand’s successful TikTok campaign in December 2020, said Levan. A sponsored post for the campaign by TikTok influencer @jessica.eid_ went viral, earning 5.2 million views and 1 million likes. It inspired many users to stitch the video to try out the mascara themselves.

“Consumers were rushing to stores and then filming content of their first reaction from their cars,” said Levan. She noted that TikTok has “played a key strategic role in driving relevancy with Gen Z” for the past year, with brand investment in paid, owned and earned content. The brand is focused on being “fully immersed in the social landscape,” and is also seeing traction with Gen Z on Instagram Reels, Twitter and YouTube.

Maybelline “had an ambitious and very consistent strategy on TikTok,” said Marina Mansour, head of beauty partnerships at Kyra. She added that the brand is popular with the Gen Z audience because it’s “utilizing the channel that this audience leans into for discovery, when it comes to cosmetics.”

In second place for makeup was E.l.f., which ascended from ninth place in 2019.

E.l.f. is “a key innovative brand, when it comes to doing things in an interesting way on TikTok,” said Mansour. That especially includes its successful Eyes, Lips, Face campaign that was one of the first brand campaigns to go viral on the platform, she said. She added that Nyx, in third place, has embraced a similar strategy. E.l.f has been especially focused on reaching Gen Z through new platforms; it has also run campaigns on Twitch and Triller, and launched novel promotions like its Chipotle collab.

Both Nyx and E.l.f. also emphasize that they are cruelty-free and vegan, which the survey found was an important factor for Gen Z. A total of 53% of respondents said they would stop using a brand that tested on animals, while 50% said they would not purchase a brand if it is not certified as cruelty-free.

Dove, meanwhile, was the top brand for skin care, which may have ascended due to its values-driven marketing campaigns fighting unrealistic beauty standards and heavy photo editing, said Mansour. The pull of TikTok was apparent, with CeraVe rising to second place in 2021 after not cracking the top 10 in 2019. The brand has seen a massive boost by skin-care influencer Hyram Yarbro, whose organic endorsement of CeraVe evolved into a brand partnership.

“You cannot underestimate the power and the trust that Hyram has when it comes to skin care across the Gen Z audience,” said Mansour.

Though Glossier made the 2019 makeup and skin-care lists, it wasn’t present on either ranking in 2021.

“Glossier is much more of a millennial brand,” said Mansour.

While TikTok has shown to be especially important, it came in as the second most important social platform after YouTube in influencing users to add a new product to their skin-care routine. For online beauty information overall, Gen Z turns to YouTube first, followed by TikTok and then Instagram. Online reviews were cited as the main influence for purchase decisions, followed by influencer tutorials in second and friends and family in third. Less than 10% of Gen-Z respondents said TV influences their purchase decisions.

According to Mansour, the dominance of mass brands does not mean that premium labels can’t also resonate with Gen Z. “Price point is always a consideration, but when you are pulling on the things that we know move Gen Z, which are creativity, online reviews and creators backing a product, price point is not as much of a barrier as it used to be.”