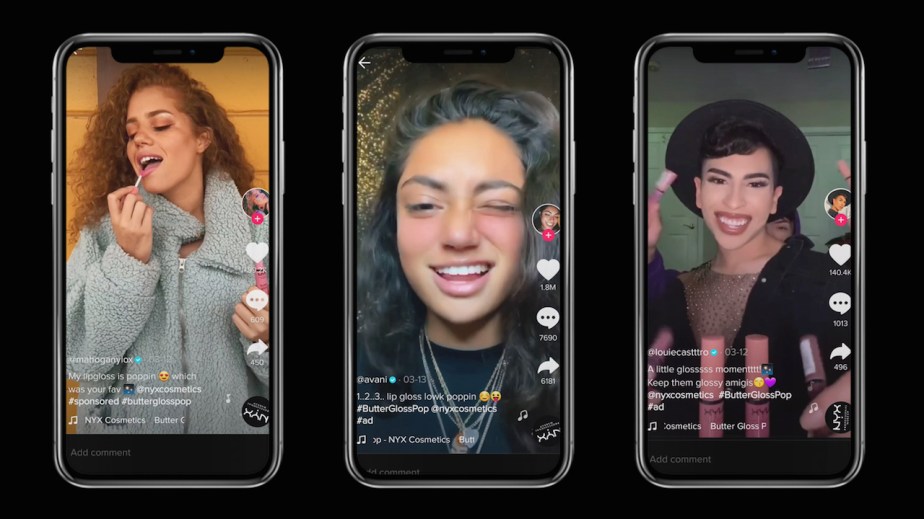 How NYX used TikTok to boost brand awareness by 42%

For NYX Professional Makeup, the underlying theme of its second TikTok campaign was: Go big, or go home.

NYX ran a six-day campaign between March 12 and March 17 that placed its lip gloss at the heart of a TikTok challenge called #ButterGlossPop. NYX wanted to “push itself” to try something different for the brand, according to Yasmin Dastmalchi, NYX Professional Makeup svp of marketing and digital in the U.S.

TikTok is a newer platform for NYX; the brand launched its account on Aug. 2019. But it’s a high priority for the digitally-native Gen-Z brand, said Dastmalchi. The brand created an original song for the campaign and worked with five TikTok influencers to help it go viral: Avani, MohoganyLox, Brent Rivera, Louie Castro and Tanisha Coatzee. They invited followers to “pop your gloss,” prompting viewers to try out multiple shades of lip gloss while singing or dancing. Additionally, one winner, selected at random received $1,200 worth of NYX products. The paid campaign saw over 2 million user-generated videos created and over 10 billion views.

“TikTok itself is an evolving platform, and there are new content creators and types of entertainment every day,” said Dastmalchi. “We want to strive to connect with our consumers and bring entertainment to life.”

To evaluate its success, NYX relied on engagement figures around UGC and views, but it also commissioned a mobile survey from Kantar during the six-day campaign and found that it experienced a 42% increase in brand awareness based on a sample size of approximately 10,000 people. NYX declined to provide further information about survey responders, such as demographic or psychographic makeup. Additional key performance indicators included intent to purchase from NYX, though Dastmalchi declined to share results. She said the campaign did have a “positive sales impact” across the brand’s lip category at all points of sale. NYX products are sold through its own website, as well as at Target, Macy’s, Ulta and CVS.

This is despite mixed industry sales data on lip gloss, especially in light of coronavirus. Lip gloss sales grew by 3% in 2019, but have been down so far in 2020, according to NPD data. Between January and April, sales declined by 22%, as customers were less apt to wear sticky lip products underneath face masks. However, Spate saw a 63% growth in search queries for lip gloss between April 20 and April 26, compared to the same time period in April 2019.

NYX was mentioned by its parent company L’Oréal Group in its latest earnings call in February, where Jean-Paul Agon, L’Oréal CEO, said the brand’s equity was in the professional sector, but it was adapting to respond to the no-makeup-makeup consumer trend. Even more popular brands like Kylie Cosmetics have not been immune to makeup’s downturn prior to coronavirus. According to Aug. 2019 Rakuten data, the company’s sales declined 14% between June 2016 and May 2019.

Dastmalchi said there were several lessons that NYX took away from its campaign that it will apply to future TikTok campaigns. The first is that the brand should allow the TikTok community to lead the direction for content, a best-practice that other brands on TikTok like Eos have adopted. The second lesson is that there is a place for influencers on TikTok, but that they differ from those found on Instagram. (TikTok influencers tend to focus more on music and dancing.) Lastly, because TikTok is a platform that consistently evolves at a rapid pace, brands like NYX need to embrace experimentation, because there is no formula for success.

As part of the campaign, NYX used a new polling feature from TikTok that allowed viewers to engage further with the brand. The poll was on which flavor of lip gloss was most-liked, and the winner was crème brûlée. Separately, NYX tested TikTok’s social-gifting program in late April, where it allowed users to send $5 gift cards to their contacts via the platform.

“In terms of some of the limitations on TikTok, there are fewer opportunities for direct response marketing, compared to other platforms,” said Evan Horowitz, CEO at Movers + Shakers creative agency, which worked with NYX to craft its campaign. “For brands focused on direct [sales] performance and [increasing] shopping carts, it is not as developed. But it’s incredible for campaigns like NYX’s, where it’s really about engagement, and lift in brand affinity and awareness.”

TikTok is increasingly becoming a pillar marketing channel for beauty brands, which only intensifies the competition for consumer eyeballs. E.l.f. nabbed over 5 billion views for its first campaign in Oct. 2019, although its latest unpaid campaign (#elfvanishingact), which began on May 5, has attracted just 16 million views as of May 18.

Dastmalchi declined to share campaign investment figures, but said that the budget was reallocated to focus on creating an original song and paying content creators, compared to its first campaign. NYX’s first campaign, #BornToGlow, that took place over five days in Nov. 2019, tied to the brand’s Born to Glow foundation and received over 6.7 billion views.