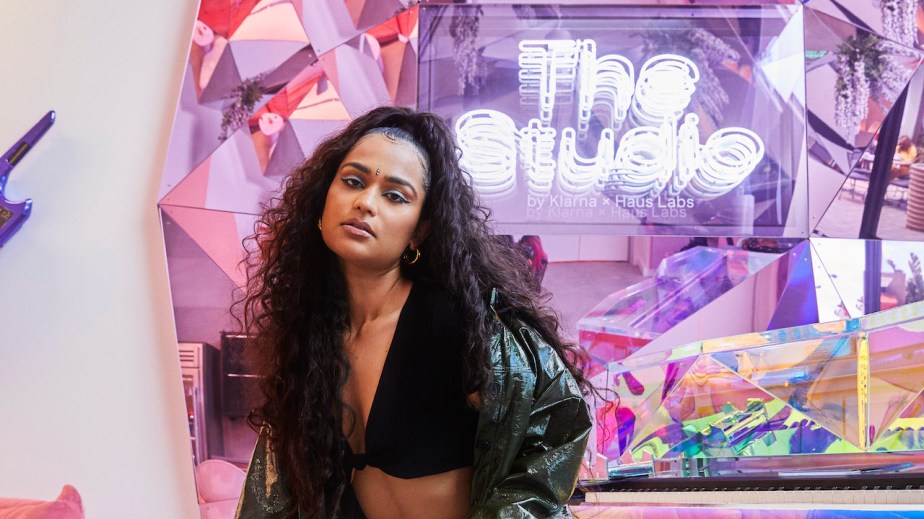 Haus Laboratories, the color cosmetics brand founded by Lady Gaga, has opened up its own content studio in Los Angeles.

Initially slated as a space for content creation and creative experimentation for Lady Gaga and the Haus Labs team, it evolved during the design process to become an incubator program in support of its broader creative community. It was created in partnership with Swedish fintech company Klarna. Haus Labs has worked with Klarna as a payment option on its DTC website since Oct. 2020. “The Studio by Klarna x Haus Labs” will now serve a dual purpose: a local hub for Haus Labs and a resource for up-and-coming creators through a newly established invite-only Creator Collective of three people, which will rotate biannually. In addition to studio access, the creator cohort of three people will receive mentorship from the beauty brand and a $10,000 grant provided by Klarna.

“As we continue to grow as a brand, we felt it was important to create a space of love and freedom that people in our community could come to and feel free to create without rules,” said Lady Gaga. “We want to lift up the creators in our community as they continue to hone their crafts and give them the tools they need to do so.”

Content studios have become a popular means of connecting with influencers and generating in-house social content. Brands like Morphe have made it a focus for several store outposts, while Old Spice built out its first-ever storefront expressly for the purpose of housing a studio. Meanwhile, Haus Labs sells only DTC and via Amazon.com.

Ryan Kang, Haus Labs head of business development, said that mentorship will be in the form of partnering with creators on an as-needed (or desired) basis around business, social media, makeup artistry and creative direction. He said the plan is that the cohort of three people will be refreshed every six months. The current roster included Tavaris Jefferson (@VariJStylez; 186,000 Instagram followers) and Haya Abid (@Biddy; 34,600 Instagram followers); the third person has not yet been selected.

This is the first time Klarna has done this type of offline partnership. The company is attempting to make the U.S. its largest market this year, so cementing itself as part of buzzy brands like Haus Labs (and people like Lady Gaga) is key to attracting young customers that use buy-now-pay-later apps. Klarna raised $1 billion in funding at a $31 billion valuation on Monday, becoming the most valuable VC-backed company in Europe, according to PitchBook data.

“Klarna wants to make a dent in youth culture by being a part of it and supporting,” said Natalia Brzezinski, Klarna head of strategy. “We don’t just want to be a big player in the fintech space, or in the e-commerce space. We want to help drive transformation, culture and creativity.”

Haus Labs own ambitions for the studio outside of its influencer relationships, involve more “creative and individualistic” content than what the brand has produced to-date, said Ben Jones, Haus Labs CEO. He declined to share specifics, only saying that the plan was to “throw out the rulebook” on creative direction and content. Celebrity beauty brands have become a du jour trend with seemingly unstoppable power. However, it is increasingly saturated and sales depend on if fans turn into customers.

“As we evolve, we want some differentiation, and the evolution of our content is going to show up in a different way later this year,” said Jones. “If you go across [multiple] branded social channels, you’ll start to see that there’s not a lot of differentiation across their Instagram grid. What we’re trying to do is innovate rather than follow.”