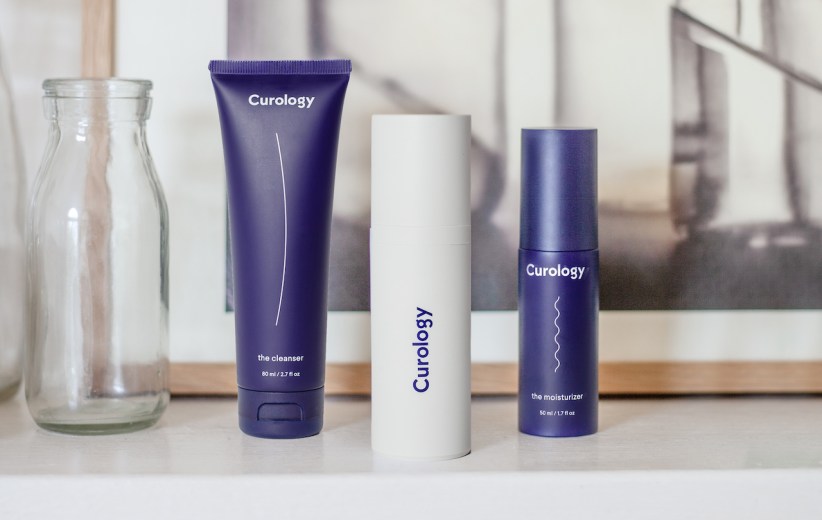 When Dr. David Lortscher debuted his direct-to-consumer skin-care and telemedicine company Curology in 2014, the big DTC guns that straddle the line between beauty and health (Hims, Hers and Roman) had not yet come to market. While Curology’s trajectory has been slower — it has raised $28 million in venture capital funding since launch, compared to Hims, raising $197 million in two years — it has proven that its personalization model has legs.

Curology has been laser-focused on acne since it launched. Until fall 2018, it only offered its hero “superbottle” acne product that is based on an online quiz, customizing active ingredients to customers’ needs. It then added a cleanser and a moisturizer in fall 2018. (In January, it added anti-aging solutions to its products). “Our core product and the reason people come to our site is still because of our customized acne treatment that is customized by a real person,” said Lortscher, who also serves as CEO. “There has also been a lot of attention paid to our cleanser and moisturizer because a level of trust had already been established.”

Curology’s stickiness may be the company’s biggest advantage. The term “personalization” gets thrown around a lot within beauty — more often, rather than customized product, it’s referring to a replenishment tool or a means of increasing customer basket size with product suggestions catered to their preferences. Lortscher said the target Curology customer is a 22-year-old female — a Gen Zer who is an inherently more skeptical shopper and may not look like she is suffering from acne. “She has pretty good skin and cares about how she looks, but she wants it to look even better,” he said.

Moving into more skin-care products may seem necessary for Curology’s growth, but there is big competition in the space, especially from larger companies like Estée Lauder Companies and Rodan & Fields. Still, Curology experienced Drunk Elephant-level growth in 2018 (more than 200% compared to Drunk Elephant’s 170%). Rodan & Fields, meanwhile, was down 3.8% to $1.2 billion, and Estée Lauder’s namesake brand and Clinique both saw less than 1% growth.

Curology’s milestones have been on just three products in five years, but Lortscher said the company’s brand awareness is at less than 3%. According to industry sources, Curology began looking at strategic buyers this summer to help remedy this and is valued at $100 million.

One banker cited Curology’s efficacy and affordability as a combination that doesn’t exist among competitors like legacy over-the-counter brands, such as Clean & Clear, or even Proactiv: “The product has your name on it, and you bypass going to a dermatologist. Customers think it should cost $100, and they’re surprised when it is $20. Because their customer is in their young 20s, their focus area does not have as much fragmentation, whereas Proactiv is distracted as it tries to be everything to every customer.”

In step with the roll-out of its anti-aging products, Curology has seen its consumer base expand from early teens to 40-year-olds — and their tastes are also changing.

“Anti-aging products have always been about prestige positioning and a feeling, but what we are seeing is that there is a large subsection of the population that wants efficacy and value together,” said Lortscher. “We are a much more rural business than a lot of the other fashionable DTC brands out there — we are filling in holes [in the U.S. market] where dermatologists don’t practice.” Though California and New York are the company’s highest-performing states because of population, its top cities are not Los Angeles, San Francisco or New York, but suburbs and second-tier cities in those states, according to Lortscher.

Until now, Curology has largely relied on user-generated video assets and short-term influencer deals on YouTube and Reddit to go beyond the standard before-and-after images seen in display ads on Facebook or Instagram. Though the company is not social media clickbait — with no Glossier-esque visuals and has only 3,000 subscribers on YouTube — it saw over 1 million minutes of view time from recent campaigns with influencers Madeline Byrnes, Alex Costa, Helen Owen and JC Caylen. Beyond UGC and influencers, Curology’s free-trial program that allows customers to get hooked before making a purchase is building a devoted base.

While Lortscher did not rule out a retail partnership, especially now that a suspected acquisition is in the mix (which he would not comment on), shelf space at Sephora, Ulta or Target may not make sense since those retailers don’t offer as extensive skin-care solutions for issues like hyperpigmentation. Moreover, not all of those retailers could possibly stock Curology’s iterative assortment, but they could solve for its awareness issue.

“We aren’t growing because we are launching new products at every turn, but we are going to keep growing faster than these other brands because we are offering personalization at scale. We only want to grow that,” he said. “No one else is doing that.”