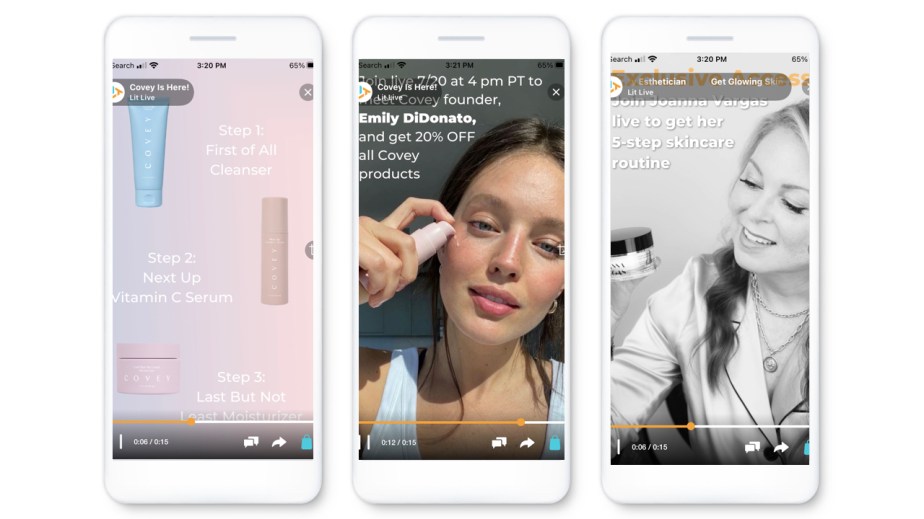 This week, livestreaming platform Shop LIT Live expands its brand roster to include skin-care brands Covey and Joanna Vargas, which are both hosting their first shoppable livestreams this week. They join a number of digitally native U.S. beauty brands and retailers experimenting with livestream shopping in hopes of seeing the format take off like it has in Asia.

“We want to be on the most innovative marketing channels,” said Nell Brown, chief growth officer at Covey. “Livestreaming overseas is so lucrative and successful that I have no doubt of its potential in the States. Our strategy is going to be we’re always testing and iterating.”

Beauty has been a prime category for the burgeoning livestream shopping market in the U.S.

“From the get-go, our platform has been focused on skin care and beauty,” said Toby Zhang, founder of Shop LIT Live. He noted that most of the beauty brands expressing interest in the app have “already had some kind of exposure [to livestreaming] or are aware of what livestream shopping is all about, so it makes the conversation pretty smooth.”

Covey hosted its first shopping livestream on July 20 featuring co-founder and model Emily DiDonato, who promoted the online event to her 2.2 million Instagram followers. While the brand had been active with traditional Instagram Lives, this marked its first event with shopping links. In the livestream, DiDonato went over a skin-care routine demonstration, offering viewers a 20% discount. Its second livestream in August will feature the brand’s co-founder Christina Garcia, a former Google exec, sharing the brand’s founding story.

Covey and Joanna Vargas join a roster of 300 brand partners that have sold on the platform either via brand livestreams or through the app’s 100-plus influencers.

Founded by Zhang, an early TikTok investor in 2017, Shop LIT Live received a $6 million seed round led by CRCM Ventures in April 2021. It currently has slightly under 100,000 monthly active users, over 10,000 weekly active users and “thousands” of daily active users, said Zhang. Month-to-month user numbers are growing by 40%, he said. The platform is currently made up of 70% women who are mostly in the millennial and Gen-Z demographics and described by Zhang as “mobile-capable” customers.

Shop LIT’s successful livestream formats include exclusive promotions, product launch announcements and seasonal sales, said Zhang. The platform is integrated with Shopify and can be accessed via the Shopify app store to list products. Each purchase on the app is fulfilled by the individual participating brand. While the app earns revenue from affiliate links promoted in influencer-curated livestreams, the “primary business model” is now focused on brand partners, said Zhang. The platform earns between 10-15% of revenue for each item sold.

User growth is driven by social promotions on other platforms, and it is especially useful when major public-facing influencers promote their upcoming Shop LIT livestreams on their Instagram accounts, said Zhang. The app also has a special reward center that awards “coins” to users for inviting friends to join the app, write a review or follow it on Instagram. Coins can then be used to make purchases.

A public-facing founder with a large following is primed for livestreaming success.

“It’s definitely one of our advantages that, with Emily, we have a camera-ready model at all times,” said Brown.

Shop LIT has been adding more features in the past several months, including personalized homepage displays based on user interests, brand accounts and its integration with Shopify. It also plans to roll out a desktop version in the coming weeks.

In-app checkout is an especially helpful feature for Shop Lit in an era where everyone has little patience and also high standards for checkout, said Brown. She said that, compared to Instagram’s shopping features, Shop LIT allows the brand to reach a user base with “a higher intent to purchase.”

While livestream shopping has taken off during the pandemic, apps like Shop LIT are betting on its long-term potential. “Should pandemic end tomorrow and everyone’s back to normal, they’re just becoming more comfortable with where things are, ” said Zhang.